Except for the reaction of Marshall Fine and to a lesser extent Variety‘s Justin Chang, The Dark Knight Rises is knocking ’em dead over at Rotten Tomatoes and Metacritic so far. All the bowling pins are toppling over and going “baaahhllkk!” 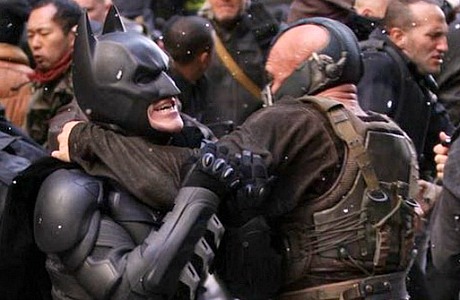 In a review that echoes the (d) comment in this 7.11 reaction riff, Variety‘s Justin Chang has, make no mistake, gone mostly thumbs up on Christopher Nolan‘s nearly three-hour epic, but he also states that The Dark Knight (’08) was better.

“While The Dark Knight Rises raises the dramatic stakes considerably, at least in terms of its potential body count, it doesn’t have its predecessor’s breathless sense of menace or its demonic showmanship, and with the exception of one audacious sleight-of-hand twist, the story can at times seem more complicated than intricate, especially in its reliance on portentous exposition and geographically far-flung flashbacks.

“Perhaps inevitably, one also feels the absence of a villain as indelible as Heath Ledger‘s Joker, although Hardy does make Bane a creature of distinct malevolence with his baroque speech patterns and rumbling bass tones, provoking a sort of lower-register duet when pitted against Batman’s own voice-distorted growl (the sound mix rendered their dialogue mostly if not entirely intelligible at the screening attended).

So, yes, The Dark Knight Rises never quite matches the brilliance of The Dark Knight, and yet “this hugely ambitious action-drama nonetheless retains the moral urgency and serious-minded pulp instincts that have made the Warners franchise a beacon of integrity in an increasingly comicbook-driven Hollywood universe,” Chang concludes.

In Fine’s view, The Dark Knight Rises is the “weakest” Batman film in Nolan’s trilogy.

“Where Batman Begins (’05) had a mythic feel that remade the origin story in an exciting new way (away from the flat-footed cartoonishness of the Tim Burton/Joel Schumacher entries), The Dark Knight felt like an overreach — an attempt to tell too many stories in one long movie. But it won over the critics, mostly because of a sizzling performance by Heath Ledger, who died before the movie was released (and who was given a posthumous Oscar).

“Now comes The Dark Knight Rises, bringing in the Bane character (played, with my condolences, by Tom Hardy) and Catwoman (Anne Hathaway, one of the movie’s few highlights). Nolan gets so caught up in creating an epic adventure that he hammers the ‘epic’ and neglects a crucial component: adventure.”

I won’t be seeing The Dark Knight Rises until tomorrow night, but at least I’ll be seeing it in IMAX, which is more than you can say for the critics who saw it Friday or the ones seeing it this afternoon. This time I’m glad to be at the end of the train, in the caboose. Which is where Warner Bros. always puts me when it comes to screenings.