The centerpiece of Lionsgate’s Hunger Games campaign “has been a yearlong, four-phase digital effort built around the content platforms cherished by young audiences,” writes N.Y. Times reporter Brooks Barnes. “A near-constant use of Facebook and Twitter, a YouTube channel, a Tumblr blog, iPhone games and live Yahoo streaming from the premiere. 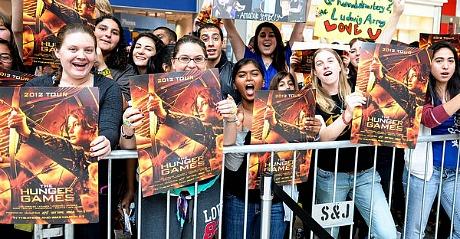 In so doing, Lionsgatemarketing honcho Tim Palen “appears to have created a box-office inferno.

“Analysts project that the The Hunger Games, which cost about $80 million to make and is planned as a four-movie franchise, could have opening-weekend sales of about $90 million — far more than the first Twilight and on par with Iron Man, which went on to take in over $585 million worldwide in 2008.”

“Selling a movie used to be a snap,” Barnes writes. “You printed a poster, ran trailers in theaters and carpet-bombed NBC’s Thursday night lineup with ads. Today, that kind of campaign would get a movie marketer fired [as] the dark art of movie promotion increasingly lives on the web.”

There is ample evidence that young females are by far the shallowest and most myopic moviegoers in existence as they (a) tend to financially support the worst kind of romantic crap, and (b) otherwise support movies that cater to their delusional dreams (romantic idealism and young-female empowerment) while showing no interest in films that portray reality as most people on the planet earth perceive and understand it. They live in their own membrane.

Palen’s genius is (a) he understands and respects the passion that drives the under-30 female demographic, and (b) has taken this understanding and learned how to exploit it.