Last night I finally saw Jon Shenk‘s The Island President (Samuel Goldwyn, 3.28), having missed it at last September’s Telluride and Toronto film festivals. Shot in late ’09 and absorbing as far as it goes, it’s a portrait of the efforts of former Maldives president Mohamed Nasheed, the first democratically elected leader of this low-lying, multi-island nation, to try and save his homeland from drowning. But it’s us, really. We need to be saved from our own blindness and complacency. 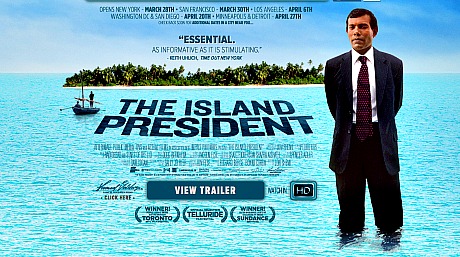 The Maldives will be underwater within decades if emerging industrial nations (principally India and China) fail to cut carbon emissions and thereby push the general level of down to 350 parts per million. The narrative is about Nasheed’s efforts to persuade the big carbon boys and coal burners to accept the urgency of the crisis and to wake up and do something about it, for Chrissake. It ends with a modest victory in this regard at the end of the December 2009 Copenhagen Climate Conference.

The film is a basically about Nasheed attending a series of meetings and discussions inside conference rooms, hotel rooms, private planes, limos and on sidewalks and pathways during roam-arounds on the Maldivean capital of Male.

It’s been claimed that over the last century Maldivean sea levels have risen about eight inches. The island nation stands only a little more than 4 feet above sea level. Do the math.

The Island President is a good intelligent doc, but I had a whopper of a problem with the version that I saw last night at the Samuel Goldwyn screening room. The closing epiloque addressed only the climate-change situation and didn’t mention — hello? — that Nasheed was forced to resign from office last month due to a military coup by those loyal to his predecessor, Maumoon Abdul Gayoom, an autocrat and dictator who ran the Maldives from ’78 to ’08.

I called and asked this morning why this recent event wasn’t part of the epiloque. I was told that the epilogue had been updated with this info, but the version I I saw happened to be an older version. Here’s how the epilogue will read on the final release print:

COPENHAGEN MARKED THE FIRST TIME IN HISTORY THAT CHINA, INDIA, AND THE UNITED STATES AGREED TO REDUCE CARBON EMISSIONS.

THE FOLLOWING YEAR, ATMOSPHERIC CO2 CONTINUED TO RISE FROM 387 TO 390 PARTS PER MILLION.

IN FEBRUARY 2012, MOHAMED NASHEED RESIGNED THE PRESIDENCY UNDER THE THREAT OF VIOLENCE IN A COUP D’ETAT PERPETRATED BY SECURITY FORCES LOYAL TO THE FORMER DICTATOR.

ISSUES IF WE DO NOT HAVE A SOLID AND SECURE DEMOCRATIC GOVERNANCE.”