“Valkyrie” back at it

I was told a couple of hours ago that Bryan Singer‘s Valkyrie (MGM, 10.2), the Tom Cruise thriller about the plot by German officers to kill Hitler, is about to start two full weeks of extra lensing. The guy who told me this (a seasoned filmmaker) pointed out that two extra weeks of shooting is, like, a lot. Most of the time extra shooting takes two or three days. Okay, sometimes four or five. 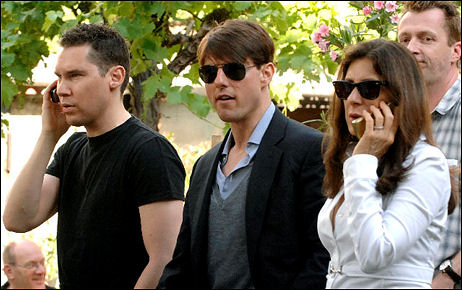 I wrote my MGM publicity friends and they didn’t deny it. Kristin Borella said the task at hand “is the big battle scene that was always intended to be shot that didn’t occur in Berlin. These scenes took place in North Africa so they could not be shot in Berlin obviously. So they are not reshooting, but rather [shooting] additional photography.”
Publicity-marketing chief Dennis Rice added, “This is not new news. We have always planned to shoot a couple scenes in the first quarter of this year. These are scenes which were always part of the original screenplay and shooting script. Because of the nature of the scenes, they were never intended to be shot in Berlin.”
Okay, “big North African battle scene,” I wrote. And it’s additional photography. You know something? I don’t really care what it is. “Extra shooting” just means the film is probably going to be that much better, so why should anyone give a hoot? I don’t. I’m just looking to post stuff (reportage, attitude, opinion) for this column.
“So is two weeks’ worth then?,” I asked again. “Is it shooting in Africa or the California desert? If it’s shooting here, may I drive out and visit?”