As I understand it, the MGM/UA rationale for bumping Bryan Singer‘s Valkyrie from October 3rd to February 13th (i.e., President’s Day weekend) is simple — they believe it will make more money on that date than it will in early October. 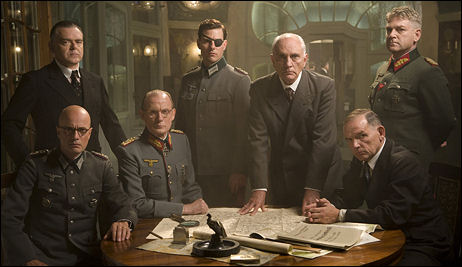 Conventional wisdom says that a twice-bumped movie that ends up opening in February of the following year has a problem. On the other hand we’re all on a moving train, and it’s necessary each and every day to hit refresh and ask, “Okay, what’s changed? What’s evolving? What is the reality of the situation right now?” Here are some thoughts and comments I’ve been processing since posting a brief item about this matter yesterday afternoon:
(1) United Artists publicity/marketing chief Dennis Rice says the reason for the switch was “real simple. The last three years of the first weekend in October produced roughly $85 million for top twelve pictures. For the last three years for President’s weekend, the top twelve have produced $150 million. We’re a small start-up company and we’re looking at the bottom line, and with the February opening we’re looking at a bigger opening, a holiday weekend and a longer playing time.”
(2) I recognize that the President’s Day weekend has delivered bonanza box-office for films like Jumper, The Spiderwick Chronicles, Ghost Rider, Bridge to Terabithia, The Pink Panther, Hitch, Constantine and so on. But all these movies were crap-level “audience” movies, and Valkyrie is a big-budget, class-A World War II thriller with a superstar lead (Tom Cruise), a blue-chip supporting cast (Kenneth Branagh, Terrence Stamp, Bill Nighy), a top-drawer director (Bryan Singer), an Oscar-winning screenwriter (Chris McQuarrie), etc.
(3) So yes, the money-making opportunity is obviously there, but it’s nonetheless unusual for an ostensibly classy, first-rate film of this sort to be bumped out of two release dates in a given year and then shifted over to February. How many films that have been twice bumped have turned into formidable critical and commercial hits? 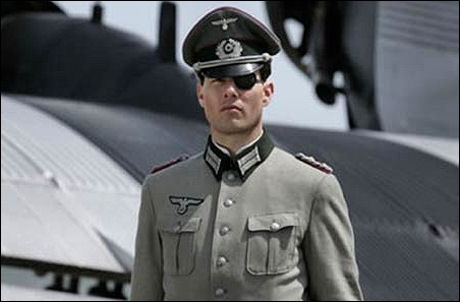 (4) When I read an early version of McQuarrie’s Valkyrie script, it didn’t seem like an Oscar contender — I was thinking “smart thriller and leave well enough alone.” It could score in the acting categories, however, and certain films — Silence of the Lambs, Gladiator, Crash – have opened outside of the Oscar season fall-holiday weekend and gone on to get recognized. “If recognition comes, so be it,” says Rice.
(5) The February 23rd date was deemed especially attractive after Joe Johnston‘s The Wolf Man dropped out of that slot — fine. But what was Valkyrie facing on October 3rd? The Express, a football movie directed by Gary Fleder, plus Nick and Norah’s Infinite Playlist, Nights in Rodanthe and Possession. Obviously not much competition. The big competition the following week (Oct. 10th) would have been Ridley Scott‘s Body of Lies with Leonardo DiCaprio and Russell Crowe.
(6) “Actually, I heard the push-back of Valkyrie isn’t necessarily just to [postpone] the film,” a director-writer wrote this morning. “The motive is to give Cruise a chance to court other studios and get a commercial film on the boards, such as The Hardy Men with Ben Stiller or even another Mission: Impossible, before the Singer flick opens and possibly colors perceptions [on this or that level].”
(7) There’s a belief among this and that producer that October is “the new Dead Zone,” as one industry-watcher explained this morning. This is based on the disappointing or underwhelming box-office that several prestige-level dramas and dramadies encountered last October — among them Rendition, Reservation Road, Gone Baby Gone, Sleuth, Before the Devil Knows You’re Dead, Things We Lost in the Fire, Elizabeth: The Golden Age, Michael Clayton, Lars and the Real Girl, Dan in Real Life, Control, etc.
(8) “I heard that Singer was trying to shape [Valkyrie] into something like [Alfred Hitchcock‘s] Rope…a kind of intense suspenseful parlor drama,” the director-writer said this morning. “But it was apparently one of those things that was one thing on the page, something that read well, but it became something else when the actors starting saying the lines on the set and people started looking at it as something to watch and sink into. I’ve been told it plays like an HBO movie.” Is that a put-down? Not in my book.
(9) A small group has seen a cut of Valkyrie. A journalist friend says he knows two people who’ve seen it and have said that it’s ‘really good‘ and have said that UA pushed it back because they still have to shoot the big desert sequence.” (I answered that the movie may be fine, but this is early April — almost six months before the 10.3 opening, which is plenty of time to shoot a desert sequence and pop it into the front section.) Another guy I know was told a while back by a person not with MGM or UA that he might be invited to a screening of it, but then it didn’t happen. The vibe he got from this person was a kind of a “hmmm, what do we have here?”