Jeff and Sasha‘s latest Oscar Poker (recorded two days ago) is up and running. For love, for formula, for comfort and for the joyful shirking of 2022 Best Picture nominees that many respect but nobody really loves…be honest. It was another weakish year, and the only film that really bull’s-eyed according to its own self-=imposed terms was Top Gun: Maverick. Stop arguing! Within the prison cell of general Academy preferences TG:M is the only hot mama that truly sings. 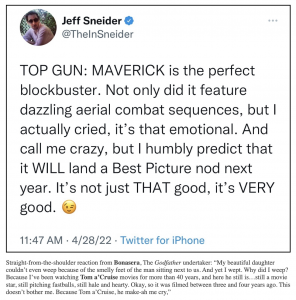 Posted on 1.21.23: “Sasha Stone and I just finished an hour-long chat about Tuesday morning’s (1.24) announcement of the ’23 Oscar nominations, and the obvious fact that Top Gun: Maverick, which will certainly be among the chosen few, is the only prospective nominee that feels truly commanding. Authoritatively, I mean.

“Despite the familiarity and the formulaic strategy, TG:M is the only finalist that feels home–runnish…not to mention the achievement of having joined forces with Avatar: The Way of Avatar to save and even restore a classic, life-giving Hollywood dynamic (thrills, popcorn, warm seats) to exhibition itself…there’s no ignoring the metaphor.”