My first reaction to Glenn Kenny‘s Some Came Running pan of Evan Glodell‘s Bellflower was, “Hey, he likes using the term ‘beardo’ as much as I do!” I don’t know when it began to catch on, but I’ve used “beardo” a lot over the last two or three years (and twice in Bellflower riffs). It basically means “pretentious or self-centered jerkoff who wears a beard.” 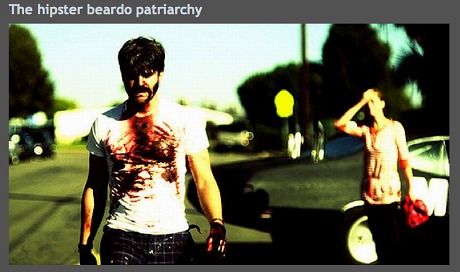 “In his review of the inventive enfant-terrible indie Bellflower for The A/V Club,” Kenny writes, “Keith Phipps hits on something crucial about the film that I’ve yet to see any other reviewer mention. He says that ‘after a point’ it becomes ‘a film about men who hate women, and it comes awfully close to endorsing that point of view.’