Wanted Is Smiley’s People, In A Sense

I should have written something by now about Anton Corbijn‘s A Most Wanted Man (Lionsgate/Roadside, 7.25), but…you know. Friday jam-ups, fatigue, distractions. I know Corbin’s film is paydirt for anyone starved for the kind of somber, moody, highly intelligent espionage drama that has all but disappeared from theatres. Paydirt and pretty damn essential. Phillip Seymour Hoffman‘s final performance, it turns out, is among his all-time best — a moody, eccentric, super-brilliant German spy who’s constantly medicating with alcohol, tobacco and coffee (an unavoidable echo or allusion to the addiction that took Hoffman down earlier this year). A Most Wanted Man also contains one of the more on-target performances from Rachel McAdams ever, as well as a tremendous “performance” from the city of Hamburg itself, which hasn’t seemed quite this noirish or all-enveloping since Wim Wenders‘ The American Friend. 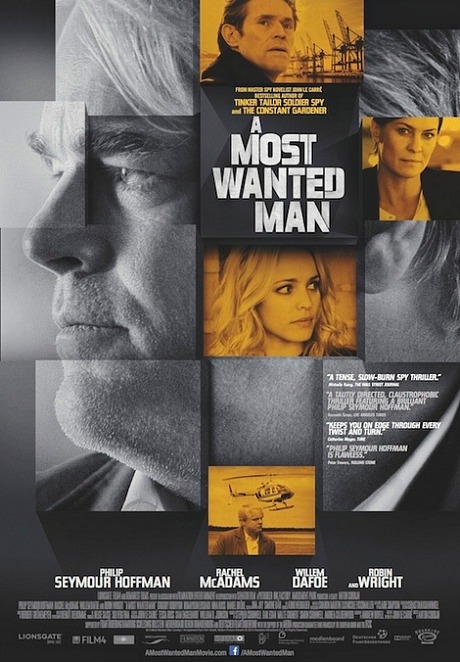 A Most Wanted Man is so darkly alluring and densely fascinating that I’m going back to see it a second time this weekend. It’s one of those films that you want to see twice to scan it for whatever clues may have been revealed early on but which you, the all-but-clueless or perhaps not-smart-enough viewer, missed the first time.

It’s based on the 2008 John Le Carre novel, of course, and bearing all the atmospheric and psychological hallmarks of that author’s work for the last 49 years, which is when The Spy Who Came In From The Cold made him a literary superstar. The plot is all about a weird-behaving, possibly fanatical young Russian-Chechen guy named Issa (Grigoriy Dobrygin), sullen and dirty and looking like a bearded rat, who slips into Hamburg to claim his Russian father’s ill-gotten millions. He soon attracts the interest and gradual suspicion of Hoffman’s German spy chief, who runs a tight little team composed of Nina Hoss and Daniel Brugh, among others. Willem Dafoe‘s local banker and Robin Wright‘s CIA operative are also part of the demimonde, but there’s no real clue what the shot is for the longest time.

“This is well made and curiously intriguing and presumably leading somewhere,” I told myself, “but I don’t have clue #1 what this grimy Chechen guy might be up to, or what Hoffman and his gang think he might be up to…if anything.”

I found a movie-related site claiming that the film culminates in “an adrenaline-laced and heart-rending escalation of tension and collision.” Believe me, it doesn’t do that. It holds you every step of the way, true, but your pulse is hardly pounding. I honestly couldn’t figure out what was happening until the last third or so. The book hints at what it might be happening here and there but the film is a lot more covert, or so it seemed.

I got the idea from the reviews that came out of last January’s Sundance Film Festival that A Most Wanted Man underwhelms or doesn’t quite pay off. Wrong — it pays off very nicely. It just one of those subtle little Swiss-watch films that waits until the last 15 or 20 minutes to (a) tell the audience what’s been happening the whole time and (b) pull it all together and then make its dramatic points.

A Most Wanted Man is fairly similar to the 1982 six-part BBC miniseries of Smiley’s People in this respect. It wasn’t until episode #5 that this Alec Guiness-starring series began dispensing hard information about what was actually going on — i.e., that Soviet spy chief Karla had gone to a lot of malicious trouble to care for his schizophrenic daughter, and in doing so had gradually made himself vulnerable to the manipulations of the British “circus,” otherwise known as MI6.

I know one thing: any Chechen Russian or Chechen Muslim with a long beard who doesn’t want money to survive on because “I have God” is not to be trusted and may well have demonic intentions.

I have to say again that there’s a creepy undercurrent to the sight of Hoffman, who died last January from an addictive habit, constantly pulling on cigarettes as well as sipping booze and coffee throughout the entire film. Medicating, medicating, always medicating. I need a nicotine hit. Now I need an alcohol hit. Now I need coffee. Now another cigarette. Now a sip of whiskey. Now an espresso. Now another cigarette. Obviously no one was expecting this to be anything more than character traits, but it sure seems like some kind of reflection of what Hoffman’s life was like at the time of filming (i.e., fall of 2012).