We all like to pass along gossip and maybe embellish for effect, but Orson Welles took the cake 30 years ago when he dished about the plane-crash death of Carole Lombard to Henry Jaglom. It happened during a luncheon they shared in 1983, which Jaglom recorded and transcribed and has now shared in a book called “My Lunches With Orson” (Metropolitan, 7.16). Welles contended that the plane Lombard was flying on the night of 1.16.42 was “full of big-time American physicists” (news reports said it was full of small-time Army guys) and that the plane was shot down by “Nazi agents” and that the plane was “filled with bullet holes.” 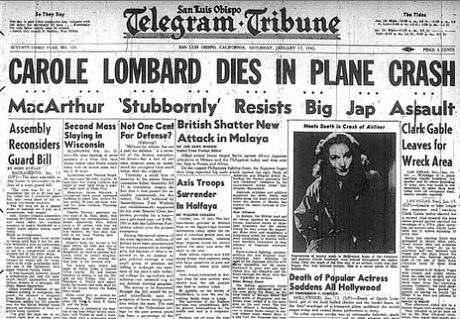 Like any good director or writer Welles loved to tell a good story and enthrall his listeners, but if you do a little checking nothing he said to Jaglom about Lombard’s death sounds even remotely plausible. Welles loved playing the role of the big swaggering genius who’d done everything and knew everyone and lived extra large, but the Lombard tale is absurd. Armed Nazi agents standing on a ridge 8000 feet up in rough terrain, waiting for Lombard’s plane to fly over?

Boilerplate version: “In the early morning hours of January 16, 1942, Lombard, her mother, and Winkler boarded a Transcontinental and Western Air DC-3 airplane to return to California. After refueling in Las Vegas, TWA Flight 3 took off at 7:07 p.m. and approximately 23 minutes later, crashed into ‘Double Up Peak’ near the 8,300 ft (2,500 meters) level of Potosi Mountain, 32 statute miles (51 km) southwest of Las Vegas. All 22 aboard, including 15 army servicemen, were killed instantly.”

A news report filed hours after the plane crash states that the pilot, identified as “Captain Williams…had given no hint of trouble and the only word received from him after he left Albuquerque was a routine report that he was off. Visibility and weather conditions were reported good.”

Okay, there’s one little hint that something weird might have happened. “It was pointed out by airline officials that ‘a flick of the pilot’s wrist could have sent the transport safely over the ridge’ if something unforeseen had not occurred,” the news report states. Opinions passed along by “veteran pilots at the Lockheed Air Terminal” were that “something happened inside that plane and is happened so fast that Williams couldn’t do anything about it.”

“‘They said the stretch over which the plane was flying is one of the easiest flying stretches on the route,’ and that ‘Williams, they said, was a crack pilot with years of service in commercial flying. His flying orders, they said, called for an altitude of 8000 feet. Most of the area over which the plane was routed is table land with an average elevation of 4500 feet.

“Willard George, a Los Angeles furrier who owns a ranch in the Table Mountain district, said he saw the plane passing over in the twilight and that it appeared to him that the tail was bobbing up and down and otherwise acting in a peculiar manner. 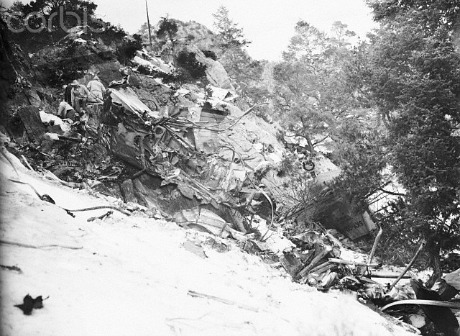 Here’s the Welles-Jaglom conversation about Lombard:

O.W.: Gable’s wife. I adored her. She was a very close friend of mine. And I don’t mean to imply that we were ever lovers. Do you know why her plane went down?
H.J.: Why?
O.W.: It was full of big-time American physicists, shot down by the Nazis. She was one of the only civilians on the plane. The plane was filled with bullet holes.
H.J.: It was shot down by who?
O.W.: Nazi agents in America. It’s a real thriller story.
H.J.: That’s preposterous.
O.W.: The people who know it, know it. It was greatly hushed up. The official story was that it ran into the mountain.
H.J.: The agents had anti-aircraft guns?
O.W.: No. In those days, the planes couldn’t get up that high. They’d just clear the mountains. The bad guys knew the exact route that the plane had to take. They were standing on a ridge, which was the toughest thing for the plane to get over. One person can shoot a plane down, and if they had five or six people there, they couldn’t miss. Now, I cannot swear it’s true. I’ve been told this by people who swear it’s true, who I happen to believe. But that’s the closest you can get, without having some kind of security clearance. No one wanted to admit that we had people in the middle of America who could shoot down a plane for the Nazis. Because then everybody would start denouncing anybody with a German grandmother. Which Roosevelt was very worried about. The First World War had only happened some twenty-odd years before. He’d seen the riots against ­Germans. And he was very anxious for nothing like that to be repeated. He was really scared about what would happen to the Japanese if all the rednecks got started.
H.J.: So his idea was to protect them? That’s why he rounded them up and put them in camps?
O.W.: Yes.
H.J.: You knew Roosevelt, right?
O.W.: Yes, I kept him up too late. He liked to stay up and talk, you see. He was free with me. I didn’t need to be ­manipulated. He didn’t need my vote. He used to say, “You and I are the two best actors in America.”

June 18, 2013by Jeffrey Wells6 Comments
« Previous post
Newsflash For Salespersons at Clothing Stores
Next post »
This Is My Disease