“This is the only time I’ve been consciously trying to capture a sensation, which is that emotion of when you’re a 12-year-old and you fall in love. I remember that being such a powerful feeling, it was almost like going into a fantasy world. It’s stuck with me enough that I think about it still.” — Moonrise Kingdom director-cowriter Wes Anderson speaking to N.Y. Times contributor Dennis Lim in a 5.13 article called “Giving Chase To Young Love on The Run.” 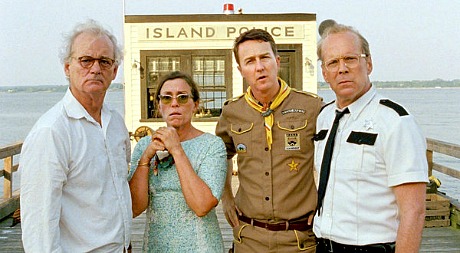 “I’d really like to see a movie from Wes Anderson about adult characters dealing with adult-type stuff. They can act like adolescents all they want, but enough with the precious adolescents and the stop-motion animals and robots and Dalmatian mice and bright young obsessives with father issues. Please. We need a Wes movie about guys in their late 30s or 40s who don’t come from inherited wealth and have had to scrap to survive and who ride motorcycles and fuck well and have more or less found their place in life.” — from a 3.23.12 HE post called “End of Phase One.”

Moonrise Kingdom will have its first Cannes Film Festival screening less than three days hence. I’m flying down to Nice on Tuesday morning, and will be in my pad by late Tuesday afternoon. No one will be more delighted than myself if Moonrise turns out to be even a little different than what everyone — and I mean everyone — is expecting.