I was immersed in traffic late yesterday afternoon when I heard about longtime Entertainment Weekly critic Owen Gleiberman getting the axe. I pulled over and sent him a standard but earnestly felt “so sorry but chin up!” email. Owen is a friend and good fellow with whom I’ve conversed at film festivals and parties for the last couple of decades. A superb, hugely entertaining writer and a major, major Film Catholic. Nobody knows or worships the realm more than he. With his highly attuned awareness levels Owen had to know this was coming, of course. Like a squirrel dealing with the approach of winter, he’s surely been making contingency plans for some time. 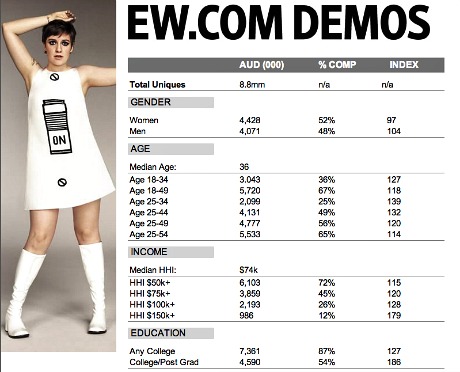 It’s old news but the occasion calls for a recap. Cultured, super-brainy film disciples like Owen aren’t respected or valued like they used to be, certainly not by the hoi polloi. For the last several years it’s been less and less about informed, insightful opinions from ivory tower elites and more and more about the social media conversation on Twitter and comment threads and whatnot. Plus I’ve had this idea for a while now that Entertainment Weekly is mainly read by lightweights, or more particularly by the moths who are attracted to celebrity jizz for its own sake with a particular focus on Kardashian Coke bottles who are famous for being famous.

EW certainly seemed to be a somewhat hipper magazine when I wrote News ‘n’ Notes articles for Barbara O’Dair and Maggie Murphy from the early to mid ’90s. I know that one of my 21st Century “aha!” moments happened in November 2009 when I noticed an EW DVD review of a newly mastered North by Northwest “that didn’t even mention the Bluray version, which was more or less the incentive for Warner Home Video re-issuing this 1959 Alfred Hitchcock classic in the first place,” I noted at the time. “This means, I’m guessing, that EW readers are primarily under-25 females who don’t know from Bluray players.” The readership actually skews about 52% female to 48% male, largely in the range of 18 to 49 years old. But they’re not very deep or learned, this group…I can tell you that much. This is the world in which we live.

Owen will re-focus, find his feet, write a book or two, start or join an online talk-radio enterprise, join another publication or launch his own site…but I don’t want him taking any kind of sabbatical. I want to see him at Cannes and Toronto and so on, just like always. I’m presuming that EW has given him a nice comfortable compensation package. 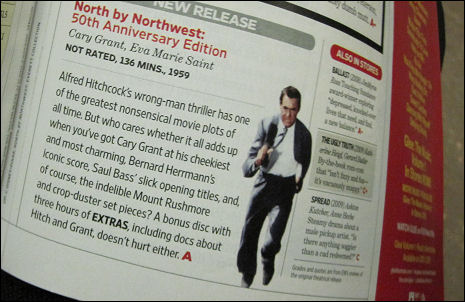