In a 5.30 Vanity Fair interview with Mad Men creator Matthew Weiner, Bruce Handy asks about the final episode and the very last beat in the journey of Don Draper (Jon Hamm), which will air next spring. It seemed to me in the recently-aired finale of Part One of the final season — which concluded with Robert Morse‘s musical number — that Draper’s demons had been more or less faced and that he’d at least temporarily overcome his self-destructive tendencies. He’s moved past the drinking, treated Peggy with respect and support, and accepted that it’s time to let Megan go. Twists and turns are sure to happen but it basically feels like “steady as she goes.” All these years I’ve been irked by Draper’s morose, downer behavior, and now that he’s more or less out of the woods I really don’t want to see a relapse. As far as I’m concerned the only thing left to do is loosen up and stop wearing that 1961 Peter Gunn hair style and throw away that stupid fucking hat. 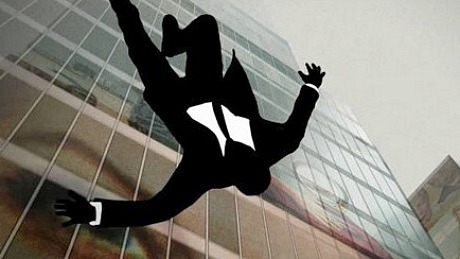 “I wrote the finale over Memorial Day weekend,” Weiner says. “I had an outline that the writer’s room and I had been working on for the past four or five weeks, so that always makes it easier to actually get it done, but it was great to finish it. I’ll be tweaking it and directing and working through that, so it’s not [a] complete release because it’s not really done until it goes on the air.

“But yeah… [long pause] it was a pretty strange experience. I don’t really have words for it. It hasn’t sunk in. Just the idea that you’re finished with writing for a while in itself is mind-blowing. It’s my first little piece of withdrawal from the ridiculous miracle that was getting to do this show. But now I have all the anxiety of, is this the right ending?”

“Is this the right ending“? Is this just another instance of no-big-deal creative anxiety or is Weiner worried on some level that the response to the Mad Men finale will be a replay of what people thought about the final episode of Damon Lindelof‘s Lost? Or the final episode of The Sopranos?

“I sort of knew where Don’s story was going when I started [the show], in a way, but what would actually be the manifestation of the last few minutes of the show, or what the lasting image would be, that was something that came to me between seasons 4 and 5, like right during my negotiations [with Lionsgate and AMC to continue the show, which turned nasty at one point] — that terrible negotiation — and I told Jon about it when I knew we were going back to work. And I followed through on it! You have to take my word for that.”