A 5.29 article about Edge of Tomorrow star Tom Cruise by MacLean‘s Barry Hertz basically says three things: (1) He’s an undiminished box-office dynamo (his films had grossed about $7.3 billion worldwide as of last year) who commands true international drawing power, (2) while he’s lately been choosing pricey, high-impact charismatic action hero projects, his success is largely due to his having chosen shrewdly and always ensuring the presence of smart scripts that are more defined by character than action beats, and of course (3) bringing that shit home with grounded, rounded, believable performances. 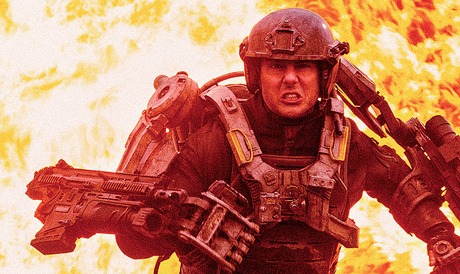 Cruise has always conveyed intelligence, drive and intensity, but he became a more interesting actor when stress lines began appearing on his forehead and around his eyes, and vague suggestions of vulnerability started to peek through. It is axiomatic that Cruise’s characters never “lose” but a certain weathering of his features indicated that his pogo-stick relentlessness might not be enough at the end of the day. This began to happen with his landmark performance in Oliver Stone‘s Born on the Fourth of July (hippie makeup, wheelchair, rage) but it really kicked in with Cameron Crowe‘s Jerry Maguire (’97), when Cruise (born in July ’62) was only 34 or 35. That was the first time I sat up in my seat and muttered to myself, “Whoa, he’s got little crow’s feet! No more Joel Goodson. A new phase has begun.”

That was Cruise’s crossing-the-Rubicon performance. I’ve since tended to process his performance as pre- and post-Maguire.

Best pre-Maguire performances: All The Right Moves, Risky Business, Rain Man, Born on The Fourth of July, The Firm.

Best post-Maguire performances: Eyes Wide Shut (although he seems straight-jacketed in that film), Magnolia, Vanilla Sky, all four Mission Impossible films (even though these were hardly about reaching inside and “acting”), Collateral (his third-best performance after Born on the Fourth of July and Jerry Maguire), “Les Grossman” in Tropic Thunder, Jack Reacher (arguably Cruise’s best low-key performance), Edge of Tomorrow.

Decent-to-acceptable Cruise performances in generally tedious, irksome or underwhelming films: Top Gun, Legend, Days of Thunder, Cocktail (I hated, hated, hated this bartending soap opera), The Color of Money, Far and Away (awful…one slamming right cross after another), Interview with the Vampire (by no means “bad” but for some reason I’m having trouble recalling any exceptional scenes), The Last Samurai (in which Cruise played a werewolf who could only be killed with a silver bullet), War of the Worlds, Lions for Lambs, Knight and Day, Oblivion.