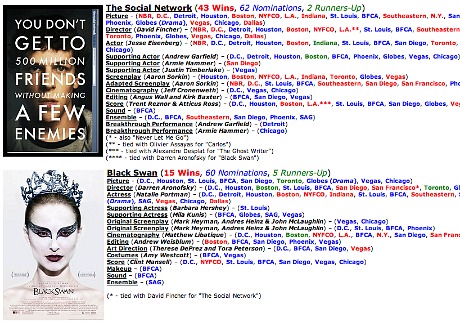 And none of this means anything to the older industry crowd. At all. They are dwelling …how to put this respectfully?….in their own aesthetic reality pocket. Including, to some extent, GenX types. Example: Don Murphy wrote in this space on 12.14 that “critics are to laugh at, not pay attention to.”

Which is why David Poland said on 12.13 that TSN “still isn’t going to win Best Picture from the Academy…unless they’re starting a media branch.” And in yesterday morning’s “Oscar Talk” podcast Indiewire‘s Anne Thompson said Black Swan has screened poorly with the yentas and the farts on both coasts, and is therefore slipping, she suspects, to the bottom of the Top Ten list.

Because (or so the general word-of-mouth suggests) The Social Network is too cerebral and chilly, and because Black Swan is sparking certain negative associations in the minds of older women who would rather not see a female character succumb to insecurity and creative panic and the urgent manipulations of a crazy stage mom and a predatory male ballet director.

We are talking about worlds and mindsets that are light years apart. There is the world represented by columns like HE and Awards Daily and Patrick Goldstein‘s and Scott Feinberg‘s column, etc., and by box-office and top-critical opinion and what you hear active and educated people say on the street and in bars and restaurants all over Manhattan (as well as in Los Angeles and, I’m presuming, Topeka and Orlando and Joliette), and then there’s the planet Neptune…the industry realm, the folks on the hill, happily ensconced, surrounded by a moat and castle walls, a realm of brains and success and urbanity and clubbiness that supports a certain world view, a certain susceptibility to a certain brain enzyme that circulates in response to certain films and results in a kind of mule-like resistance…”not what we want, not what we want, not what we want.”

Note: My apologies to HE commenters, but I was obliged to delete and repost this story, which originally ran Saturday morning, due to a ridiculous server clock/time stamp issue created by the geniuses at Softlayer/Orbit the Planet, which is HE’s internet service provider for the time being. As a result (and I really couldn’t help this) all of yesterday’s comments were wiped out.