Over the last few years progressive Hollywood has been doing everything it can to “Black up” Academy membership and by extension the Oscar Awards, and obviously that’s been happening, result-wise and nomination-wise, in the acting categories. But in the broader Best Picture category most voters will tend to support movies that tap into some kind of common cultural current…subjects and stories that reflect the “all” of human experience.

Specific social-agenda movies (going all the way back to I Am A Prisoner From a Chain Gang, They Won’t Forget, The Ox-Bow Incident and Gentleman’s Agreement) are almost always honored and respected, but snagging the big trophy is another equation.

We all understand that the Oscars are no longer the Oscars — they’ve become the Progressive Left Coast Tony Awards, addressing and reflecting the myopic industry culture and the general fear of wokesters on Twitter, etc. Which is why Joe and Jane Popcorn (not to mention Millennials and especially Zoomers) feel estranged if not divested, to put it mildly. Last April’s Steven Soderbergh Oscar show, a calamity by any yardstick, all but drove a stake through the brand.

Earlier today Sasha Stone and I spitballed the most likely 2022 Best Picture contenders, and there are only two one or two Black contenders that might have a shot — Reinaldo Marcus Green‘s King Richard (Warner Bros., 11.19 — obviously a Best Actor nomination waiting to happen for Will Smith) and Denzel Washington‘s A Journal for Jordan (Sony, 12.10).

The rest of the likelies are all white-centric, so even if the word goes out that King Richard and A Journal for Jordan have to be nominated to ensure at least a semi-significant Black presence, you’re still taking eight white films vs. two reflecting the POC experience.

(1) Paul Thomas Anderson‘s Soggy Bottom (PTA films have never been Oscar-friendly as a rule, but SB is set in the ’70s and has something to do with the industry, or at least with Jon Peters) (UA Releasing, 11.26)

Probably won’t make the cut for this and that reason (17): Dune, The French Dispatch, Nightmare Alley, In The Heights, No Time to Die, Passing, The Power of the Dog, Respect, Tick Tick Boom, The Tragedy of Macbeth, Pig, The Card Counter, Belfast, C’mon, C’mon, CODA, Cyrano, Stillwater. 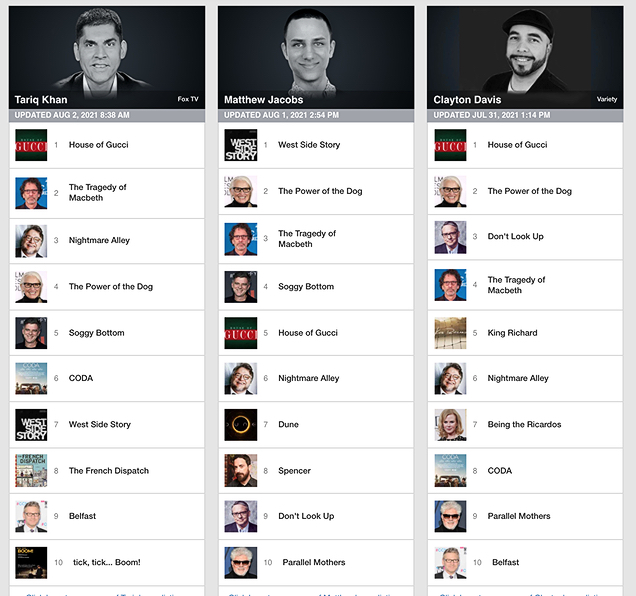 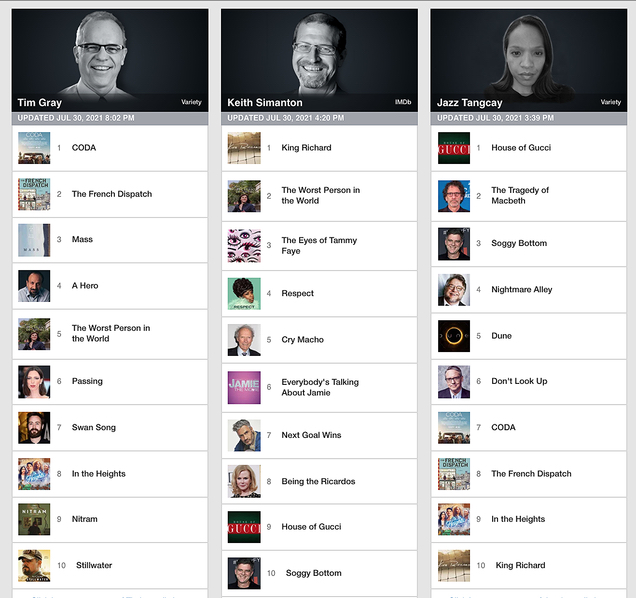