Derek Cianfrance‘s The Place Beyond The Pines (Focus Features, 3.29) has its fans, but it’s bizarre that Focus, a first-class distributor that has shown excellent marketing taste, would approve a poster as bad as this one. There’s something wildly off-balance about it. The three heads (Eva Mendes, Ryan Gosling, Bradley Cooper ) are too close to the top. The credit block is jammed in close below and too far north. And too much space is given to the dusky sky in the image that lies below (i.e., Gosling on his chopper). 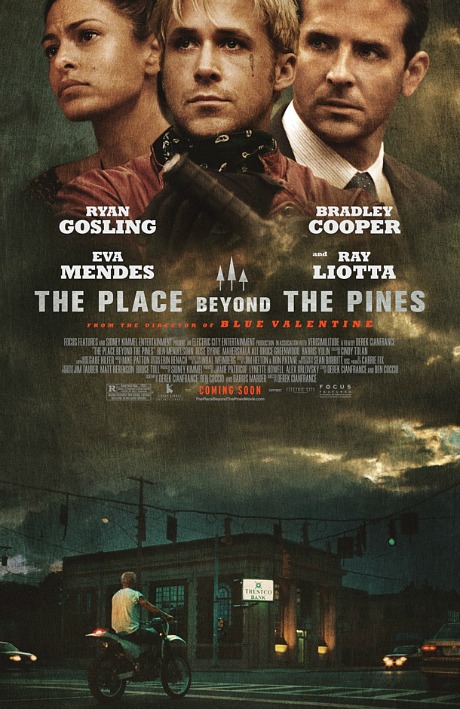 From my 9.8.12 review: “I hate movies about blue-collar knockabouts and greasy low-lifes and teenage louts who constantly smoke cigarettes. The more a character smokes cigarettes the dumber and more doomed and less engaging he or she is — that’s the rule. If you’re writing or directing a film and you want the audience to believe that a character is an all-but-completely worthless scoundrel or sociopath whom they should not give a shit about, have that character smoke cigarettes in every damn scene.

“The principal theme of The Place Beyond The Pines is the following: ‘Dads Are Everything and Mothers Don’t Matter, but Cigarettes Sure Run A Close Second!'”