I’ve watched the All The President’s Men Bluray a couple of times since buying it last February. And the thing that sticks out right away is the over-saturated color, especially the appearance of the red and blue chairs in the Washington Post newsroom. The overall appearance looks like celluloid and that’s cool, but someone turned up the saturation plus it looks a little too dark here and there. 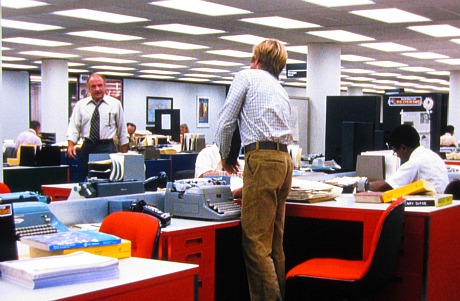 I shared my opinion yesterday morning with a technical guy who knows all about Bluray and DVD masterings, and he told me that Warner Home Video, incredibly, had never even called much less consulted Gordon Willis, the film’s legendary dp, about how the colors should look, etc. So I called Willis myself about an hour ago and he said he’d seen the ATPM Bluray on his 46″ screen and “it’s all fucked up…all the medium tones [are wrong] and contrast is way higher than it oughta be….it’s overloaded.”

Willis confirmed that no one from WHV had contacted him to consult or discuss prior to creating the Bluray. “All they had to do was use the most recent DVD as a reference because that’s fine,” he said. “They probably think they’ll get [me] in there and it’ll turn into a problem but it’s definitely a problem when they don’t. They don’t get it. They get on those fucking dials…it’s a disease. Their idea for a Bluray is to make it for guys who are watching football.”

I asked if he’d called anyone at Warner Home Video since the All The President’s Men Bluray came out to tell them they’d gotten it wrong and that they should have called, etc. “And what are they gonna say?,” he said. “We’re sorry and we’ll do it all over again? You call these guys, it’s like talking to a head on a stick.”