As noted three days ago, tracking is indicating that uncertain box-office prospects are facing the Wachowski brothers’ Speed Racer (Warner Bros., 5.9) due to interest levels for the kid-friendly film being strongest among the over-25 set. Out of this has come a notion that What Happens in Vegas, the Ashton Kutcher-Cameron Diaz comedy that opens the same day, could elbow Speed Racer aside and become the weekend’s #1 film. 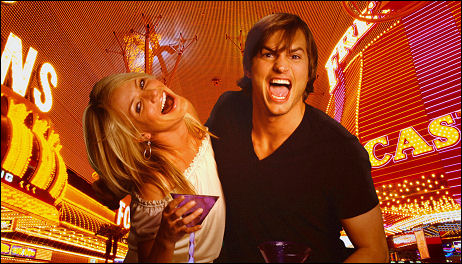 Diaz, Kutcher in What Happens in Vegas

The reasoning partly comes from reports — one of them first-hand and reliable — that the Kutcher-Diaz is quite funny and entertaining, and partly because Vegas-backdrop movies seem to be working with younger audiences these days, judging by the success fo Robert Luketic‘s 21. And because I’ve been told that two high-profile critics are down on Speed Racer, one calling it “terrible” and another using the term “godawful.” Perhaps we shouldn’t draw any conclusions, this being a young person’s movie and these two guys being on the far side of 50.
If — I say “if” — What Happens in Vegas beats Speed Racer over the May 9th weekend, it’ll be a major humiliation for Warner Bros. marketing. But who knows? Let’s wait and see what happens. You can’t tell about younger kids from tracking surveys. It’s quite possible that Speed Racer interest levels among teenagers, tweeners and toddlers will uptick significantly a week to ten days before it opens. (People tend to be flatliners on upcoming movies until opening week.)
“What you’ve written is more or less correct,” a seasoned numbers-watcher wrote after this piece went up. “The only chance for Speed Racer is if it catches on with the family audience, and as of now, there’s nothing to indicate that that’s going to take place.”
Fox had a couple of junket screenings this weekend for What Happens in Vegas, but I haven’t heard anything from any press colleagues who attended. 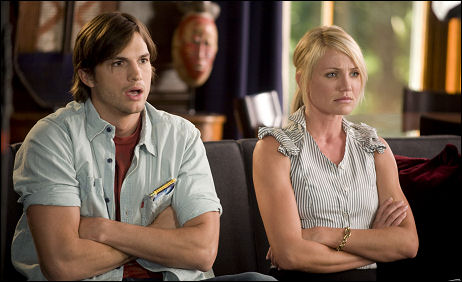 Nobody can trust IMDB posters, but if you want to believe that non-vested people wrote the Vegas responses that are currently up, the film sounds more than half decent. An older exhibitor-related friend did tells me he’s heard it’s pretty good.
“The theater was almost full and the laughs were almost as much as on Superbad,” one IMDB poster said. “The room went nuts several times. The scene were Cameron and Ashton meet for the first time is brilliant comedy. Only about 15% of it take place in Las Vegas…it doesn’t show Vegas in a very good light.”
Another wrote several hours ago that he “just finished watching it tonight at the Century City shopping mall [and] in my opinion [it’s] one of the funniest movies this year with one of Ashton Kutcher’s’s better performances. He and Cameron Diaz were perfect together in this movie, [which is] funny from start to finish.” You can tell from the syntax and phraseology that the writers aren’t that judgmental or terribly deep thinkers, suggesting the posts could be plants, but if they’re not…
The other thing, mentioned by as friend, is that What Happens in Vegas will be the fourth romantic comedy in a row aimed at 20- and 30-something couples and older women, following Made of Honor, Baby Mama and Forgetting Sarah Marshall. Will there be that much of an appetite for this kiind of thing, he’s asking, by the time Vegas rolls along?