Disney/Pixar’s WALL*E is a robot love story, yes, but also — as I reported a while back — a message movie about the lunacy of destroying our planet with fossil-fuel pollutants and whatnot, as well one that points the finger at the evil agents of this destruction. In an article up today, CHUD’s Devin Faraci, who’s seen the film, has described these bad apples as “corporations, out-of control branding, insidious advertising and rampant consumerism.” 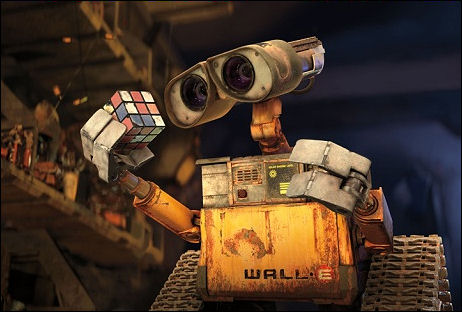 And yet writer/director Andrew Stanton, oddly, recently downplayed the ecological theme during the film’s recent press junket. Faraci has also confessed to being “fascinated by the disconnect between the film’s ecological and anti-consumerism messages and the huge merchandising push to sell plastic toys and other crapola.”
Here’s what Faraci has written today:
“The most I do is recycle, and sometimes I’m even pretty bad at that,” Stanton said at the WALL*E press junket when asked about the ecological and political themes of the film. And he wanted to make sure that the assembled journalists didn’t think he was smuggling a subversive message into his kid’s movie. “I don’t have a political bent….I don’t have an ecological message to push.”
And yet, Faraci says, “the environmental and political themes of this movie are well beyond subtext and are so blatant that you’d expect to see the WALL*E character being used in conservation ads and for the life-size animatronic WALL*E built to promote the film to show up at environmentally-themed events. Instead Stanton and Pixar are all but disavowing these obvious, in-your-face messages and pushing WALL*E as a simple robot love story.
“Pixar’s always been good about staying on message. Go back to all the publicity for Cars and you will see every single person involved with that movie spinning the same tale about John Lasseter‘s family and their cars and blah blah. The White House can’t get their p.r. spin together as well as Pixar does. 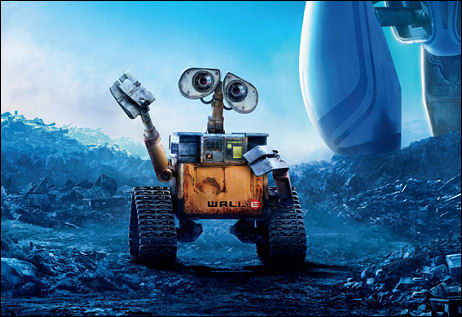 “That ‘on message’ aspect is part of what makes Pixar a successful company. They understand that they’re building their own myth right now. They understand that having a narrative behind the scenes helps make everything more sellable. And it helps draw attention away from elements they’d rather not focus on and highlight the elements they do want to have spotlighted; in this case to not talk so much about the environment and to bring it back to young robots in love (a message all the participants at the press day were on point for except John Ratzenberger, who seemed to claim global warming didn’t exist).
Stanton, says Faraci, was not completely dismissing any positive environmental themes. “I don’t mind that it supports that kind of view….it’s certainly a good citizen way to be,” he said in the most half-hearted support for environmentalism possible.
“Stanton’s measured, middle-of-the-road language clarifies to me just what the heck is going on here: someone in Pixar decided that leaning on the environmental angle would possibly scare off certain segments of the ticket buying public.”