L.A. Times columnist Patrick Goldstein has launched a daily blog to complement his once-weekly “Big Picture” column. Welcome to the club. The more the merrier. To put it kindly or generously, it only took Patrick’s bosses five or six years to decipher the writing on the wall and respond accordingly. 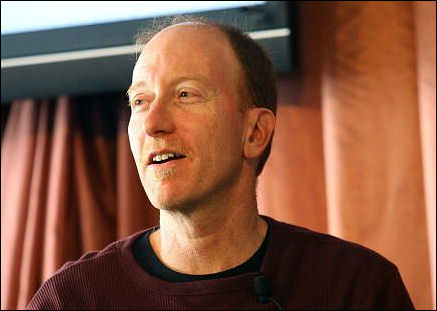 Goldstein assures he’ll be writing “with much the same style and sensibility that you’ve grown accustomed to in the column” although the blog “will be broader in scope…where the worlds of entertainment, media and pop culture collide.” Why not drop the “pop” and just say culture, Patrick? Then you do like me and write about anything and everything when you’re in the mood or feeling dried up on movie stuff.
Goldstein also says the blog will be a group effort with other Times journos jumping in from time to time. Translation: he’s a little bit freaked by the idea of round-the-clock postings and doesn’t want to kill himself.
Taking Goldstein at his word that this new enterprise is a “work in progress,” I have a modest suggestion for the Times‘ notoriously sluggish online designers. They need to give the blog (a) a name of its own and (b) a vibe and a logo of its own. Right now the Big Picture blog simply says, in large upper and lower-case black letters, “The Big Picture — Patrick Goldstein on the collision of entertainment, media and pop culture.” The regular weekly column of old says, in small caps, THE BIG PICTURE/PATRICK GOLDSTEIN. The pulse quickens! A person unaware of the new blog might easily mistake it for the regular weekly column and vice versa.

The design guys, in short, need to go outside and get high**, and then come back in and make the design of the Big Picture blog an attitude and an atmosphere unto itself. Make the reader feel as if they’re diving into some cool inner-sanctum environment that’s only tangentially related to the dull, holding-down-the-fort but at the same time going-down-the-tubes L.A. Times mainstream journo culture. Make it feel like a place where the thinkers, dreamers and schemers go to kick back after the sluggish senior editors have put on their madras sports jackets and left the newsroom. As Sam Fuller would say, make it emotional.
** As someone who hasn’t toked up in over 30 years, I’m of course being figurative.