I like to watch films at home with strong, crisp sound, or the way they sound at any first-rate venue. But a certain party doesn’t like what she regards as too-loud sound, and so a few weeks back I invested in some SONY-made wireless headphones in order to save the marriage. But I bought the wrong kind or they didn’t work or whatever. So yesterday I contacted a friendly speaker specialist on Yelp. He suggested going with Sennheiser RS-185 wireless headphones. He brought them over, hooked them up and they worked for the most part. But they didn’t deliver booming sound, which any good pair of earphones should do. They delivered sound that’s loud enough to hear with moderate sound levels, but not loud enough to give you a headache. All sound receivers should have that capability, but the RS-185s wouldn’t oblige. 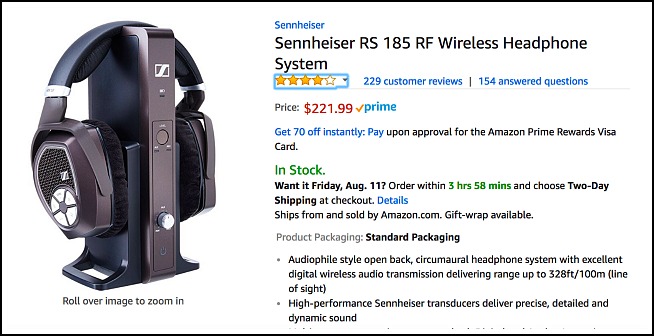 Worse, the earphones seemed to favor 21st Century films. My Zero Dark Thirty Bluray sounded fine, but Lawrence of Arabia was only moderately audible. No big booms. The voices of Peter O’Toole, Claude Rains, Omar Sharif, Anthony Quayle, Anthony Quinn and Jack Hawkins were muted — no shouting allowed. The speaker guy said that Lawrence wasn’t as loud because the late David Lean recorded and mixed it with early 1960s analog technology, and so it’s naturally not going to really sing and throb with 21st Century digital processors. I said, “Oh, come on…that’s silly! The Sony Bluray guys who remastered the Lawrence of Arabia soundtrack knew what they were doing and they certainly didn’t muffle the sound.” So we had to argue that one for a while.

Then he said I needed to try a different pair of Sennheiser wireless headphones (the RS-175), and predicted they would make me happier. So that’s the next move. This whole irksome episode consumed roughly two and a half hours.

What about simply plugging a long, twirly headphone cord into the jack on the front of my Marantz audio-visual receiver? Naaah, no dice. The tangled-up digital cross-current rebop doesn’t really configure with the whatsis and the whosis and the bop-shoo-wop, or so the speaker guy said.