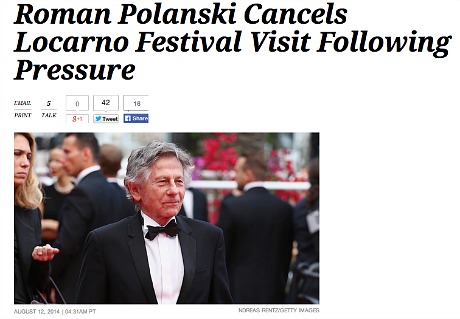 The Locarno guys don’t seem happy about the Polanski withdrawal. They described his cancellation as “a setback” and said that “the public will thereby be deprived of an important opportunity for cultural enrichment.” It added that it “continues to affirm its commitment to the principle of free and unfettered artistic expression.”

Polanski would have attended Locarno this week. He was due to receive a lifetime achivement award, give a master class (i.e., submit to a public interview) and screen his most recent film, Venus In Fur.

August 12, 2014by Jeffrey Wells28 Comments
« Previous post
Jonas and the Residents of Giverland
Next post »
Toronto Tally Now Over 30