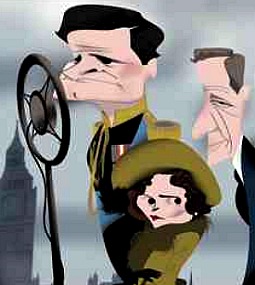 I think it’s because Lane is a Brit — he understands the material in a way that we can’t hope to. I think American industry veterans over a certain age are queer for well-made, well-spoken films about British royalty, and can’t really see them for what they are.

Excerpt #1: “The object of The King’s Speech is to make us care, as deeply as possible, about the vocal impediment of a dead British monarch. This is not a topic that, until now, has received our most fanatical attention, but the film’s director, Tom Hooper, and his screenwriter, David Seidler, aim to set us right.”

Excerpt #2: “To a large extent, The King’s Speech is itself a loyal film, one of those comedies of threatless reassurance at which the British still excel. The barbs of wit, delivered throughout, are like the retractable daggers used in stage productions of Macbeth or Julius Caesar: they gleam enticingly, they plunge home to the hilt, but they leave no trace of a wound.”

Excerpt #3: “This lightly worn iconoclasm [intends] to stroke and tickle, not subvert, and one can’t help wondering what Alan Bennett, say, would have wrought from the same material. The camera looms in close when inspecting people’s faces, so that they bulge like minor grotesques. We get the impression of a cushioned cartoon world, instead of a real one: hardly a target worth hitting, you might think.”

Excerpt #4: “The curious paradox of The King’s Speech [is that] much of it girds itself in the trimmings of decorum, and revels in the restitution of order, as required by devotees of costume drama; on the other hand, what Lionel Logue uncovers, in his sessions with the future king, is something rotten in the state of England, which nothing, not even Australia, can mend.”