It pains me to say this but George Clooney‘s The Monuments Men (Sony, 2.7) is a write-down. It doesn’t work. It ambles and rambles and tries for a mixture of soft-shoe charm and solemn pathos, but it never lights the oven or lifts off the ground or whatever creative-engagement metaphor you prefer. It breaks my heart to say this. I went into yesterday morning’s screening with an attitude of “if this thing works even a little bit, I’m going to try to give it a pass or at least be as kind as possible.” I feel emotionally bonded with this film, you see, because of my visit to the set last May and that loose-shoe piece that I posted about it on 7.1. Clooney approved the visit and was gracious and cool during my four-hour hang-out, and I feel like I owe him a little kindness. But I can’t cut Monuments Men a break. I’d like to but I can’t.

As a director Clooney has so far hit a single (Leatherheads), two doubles (Confessions of a Dangerous Mind, The Ides of March) and a triple (Good Night and Good Luck). Monuments Men is his least successful film. It honestly feels like a cross between a pop-out and a bunted single.

All I know is that I could feel the movie starting to unhinge about 15 to 20 minutes in. I never detected a clear through-line or any narrative tension. Every campfire story is supposed to make you lean forward and ask “and then what happened?” Monuments Men just makes you feel lost. The fact is that I pretty much gave up on it by the one-third mark. It’s easy to be a Monday-morning quarterback but it probably should have been a six-hour miniseries.

Clooney and his co-producer and co-writer Grant Heslov simply bit off more than they could chew. They’ve taken a sprawling real-life World War II saga and boiled it down to an amiable, loosely episodic, tonally uncertain dramedy with a little sadness thrown in. Plus two or three sermons about what a fine and noble thing it was for seven likable guys to risk life and limb in order to save the greatest works of art known to civilization. Which it was.

The Monuments Men is about the real-life Monuments, Fine Arts and Archives (MFAA) program that was launched just before D-Day. The idea was to recover fine European art that had been stolen and hidden by the Nazi command, and which was also in jeopardy from the Russians. In actuality several dozen Monuments Men were deployed throughout Europe during and after the war, but Clooney’s film reduces the number to seven — team leader Frank Stokes (played by himself and partially based on senior MFAA recruit George L. Stout) plus six art historians, scholars and restorationists played by Matt Damon, Bill Murray, John Goodman, Jean Dujardin, Bob Balaban and Hugh Bonneville. Plus some German-speaking private played by Dimitri Leonidas.

The MFAA program was approved by President Franklin Roosevelt. All kinds of logistical support (trucks, troops, cataloguers) was at their beck and call. But Clooney’s film suggests that these Magnificent Seven were more or less on their own with limited resources, banging around from location to location, stumbling into odd situations, discovering and trying to protect this or that art treasure and experiencing occasional moments of reflection or tragedy or embarassment. 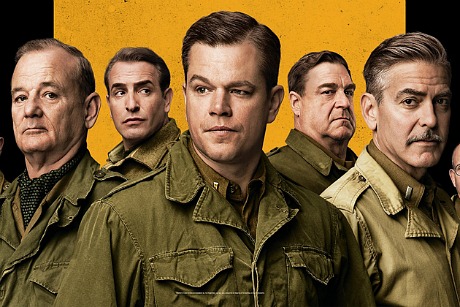 There’s a bizarre railroad station scene between a German officer who is stealing major art works from Paris’s Jeu de Paume museum (I think) and Cate Blanchett‘s art curator character, Claire Simon. (She’s based on Rose Valland, the Jeu de Paume art historian and member of the French Resistance who also appeared in The Train as Suzanne Flon‘s “Madamoiselle Villard.”) She stands on a bridge over the tracks and taunts the German for being a thief. He glares and fires three or four shots in her direction with a pistol. Do the bullets hit their mark? No. Does Blanchett at least duck to avoid getting shot? Of course not.

There’s another oddball scene in which Goodman and Dujardin are enjoying a quiet moment in a wooded area when Goodman suddenly realizes that several armed German solders are hiding in the bush. Why would a a bunch of grimy, battle-hardened vets hide from two unarmed guys standing around smoking and shooting the shit?

There’s another scene in which Murray’s character comes upon a young German soldier with a rifle aimed at Balaban. He quietly suggests that they should all sit down. Murray then offers the German kid a cigarette. They start to relax and the kid eventually forgets about being aggressive and runs into the woods. “That was nice,” I thought to myself. “Nobody got killed…cool. But what did that bring to the film exactly? What did it contribute to the overall theme or what-have-you?” I’m still trying to figure that out.

Even a scene that emotionally half-works (i.e., Murray listening to a recording of his grandchildren singing “Have Yourself a Merry Little Christmas”) seems to happen for its own reasons. It doesn’t seem to be serving the whole. It’s just “oh, Murray’s having a sentimental moment.”

Monuments Men is an episodic this-and-thatter. The tone is all over the place, sad and then jokey and then something in between. And then joyous and then meditative and then back to jokey. Some of it works here and there but more often — frequently — it doesn’t. Clooney delivers one or two on-camera speeches, another couple of voice-over sermons and a little narration in an attempt to tie it together and provide thematic coherence.

It hurts to say this stuff. I’m really sorry things didn’t work out.

You know what works? A cameo by Nick Clooney, George’s journalist-broadcaster dad. I won’t explain the particulars but it’s nice and pleasing.

During last May’s Monuments Men set visit I told Clooney that I detected a jaunty tone in the script. Clooney smiled and said, “Yeah, but we’ve taken some of the jaunt out of it since.” Not enough, I would say. He and Heslov should have gone full jaunt and made a kind of comedy (in the vein of What Did You Do In The War, Daddy?) or removed the jaunt entirely and gone grim and purposeful and war-is-hellish.

You want a really good World War II film about a tram of Nazis stealing fine art and a team of good guys who foil their plans? Check out John Frankenheimer‘s The Train (’65), a classic black-and-white actioner that you can rent or buy on Vudu.