There are three reasons why Little Fockers didn’t get an absolute zero rating on Rotten Tomatoes, and MSN critic (not to mention Hollywood Elsewhere’s own) Glenn Kenny is one of them. His curiously amiable non-condemning review plus two other passes resulted in this plastic poison IV comedy getting an 8%, which is fitting but not the historic blank-out I was hoping for. 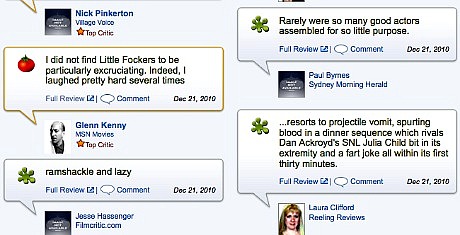 “It must be said I did not find Little Fockers to be particularly excruciating,” Kenny wrote. “Indeed, I laughed pretty hard several times. My father-in-law, whom I brought to the screening as a kind of experiment, can testify to this. It eventually settles into an amiably funny groove that holds steady” for the most part. In fact, Kenny says, “It’s kind of cute.”

There’s no accounting for taste in humor. You can’t stop people from laughing at a film that reeks of creative lupus at every turn. You can’t instruct or berate someone into not liking a terrible movie. But if there was some sort of secret elite tribunal that considered and occasionally meted out punishment to critics for not just circulating deeply offensive reviews but for being dead fucking wrong, Kenny’s indictment would be a fait accompli.