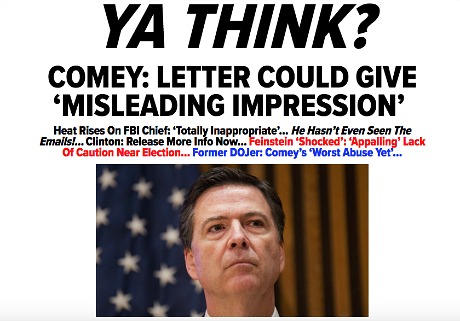 From Jane Mayer‘s New Yorker piece, “JAMES COMEY BROKE WITH LORETTA LYNCH AND JUSTICE DEPARTMENT TRADITION,” filed this morning at 1:25 am: “’I don’t really blame Comey,’ another former Justice Department official said. ‘But [what he did is] troubling.’ This official thought that Comey ‘didn’t want to look tainted. This new information comes to him, and he’s afraid if he doesn’t make it public until after the election he’ll be impeached. People will say he lied to Congress. But in the end he did the self-protective thing. Was it the right thing? Put it this way: it isn’t what previous Administrations have done.'”

And yet what matters in the end is not what Comey did, but how the average-citizen morons who never read the first four or five paragraphs of a news story and only read the headlines will respond on election day. The brainiacs will read the headlines that say “New Clinton Emails FBI” blah blah and go “Yup, more corruption, she’s awful, vote for Trump or stay home.”

October 29, 2016by Jeffrey Wells37 Comments
« Previous post
Redford’s “What I’ve Learned” vs. HE’s Version
Next post »
Not A Forensic, Pulse-Pounding Study of Domestic Terror, But An Inspirational Doc About Couples and Families Learning To Heal and Bounce Back