10:55 pm [posted by a smart guy named Mike Vatis]: “Just a reminder for people losing their minds right now.  Biden was not really expected to win, and does not need to win, Texas, Florida, Georgia or North Carolina.  A landslide win by Biden that included some of those states would have been wonderful, a clear renunciation of Trumpism.  But the greater likelihood has always been that the race would come down to Wisconsin, Michigan and Pennsylvania — again.

“Plus we’ve known for a long time now that the early vote counts (i.e., the ones you’re seeing now) in Michigan and Pennsylvania would comprise election-day votes, which would favor Trump, as many Democrats voted by mail or voted early, and those votes are tallied later.  And we’ve also known that, because of the way different votes are counted in these key states, Trump’s strategy has been to (a) declare victory tonight or tomorrow morning based on the early vote counts, and (b) use the courts (and public disturbances) to stop the counting of any mail-in votes after tonight.

“DON’T PLAY INTO HIS STRATEGY BY WETTING YOUR PANTS, PEOPLE!

“All the votes must be counted, period.  We won’t know the results for several days.  That has always been the likely scenario, and that is what everyone should have been preparing for.  Don’t let dashed hopes of a resounding early victory for Biden now drive you into Trump’s trap of believing that Trump somehow won.

“Also: Biden has an alternative path — if he does not win Pennsyltucky, but takes Wisco and Michigan, he can still get to 270 if he takes Arizona and the single electoral vote accorded to the Omaha congressional district.  That alternative path is still very much alive, too.  So there may still be some very good news tonight out of Arizona and Omaha.  And there may be some very good news out of Wisconsin early tomorrow morning (once Milwaukee county votes are tallied).  But Michigan and, especially, Pennsylvania, will take more time.  So be patient, and don’t do Trump’s work for him.”

10:45 pm: A recent 538 poll (posted on 11.2) had Demicratic challenger Sarah Gideon leading Republican incumbent Susan Collins in the Maine Senatorial race. The latest AP tally of today’s Maine vote has Gideon well behind Collins. In short, the 538 poll bore very little relation to what was in the minds of Maine voters.

9:55 pm: Anyone who claims he/she knew that the Biden vs. Trump vote would come down to a cliffhanger is lying. Two or three (including Joe Biden) predicted it would be closer than expected, but almost everyone believed that a decisive Biden victory was in the cards. Some were predicting a possible landslide.

What’s unfolding may well turn into a variation of Bush vs. Gore. Who knows? But what a mess, what a shocker. And there’s definitely something wrong with the polling industry. It’s infuriating that they got it so wrong.

Hey. So how’s everyone doing? pic.twitter.com/8I0XwuqM7F 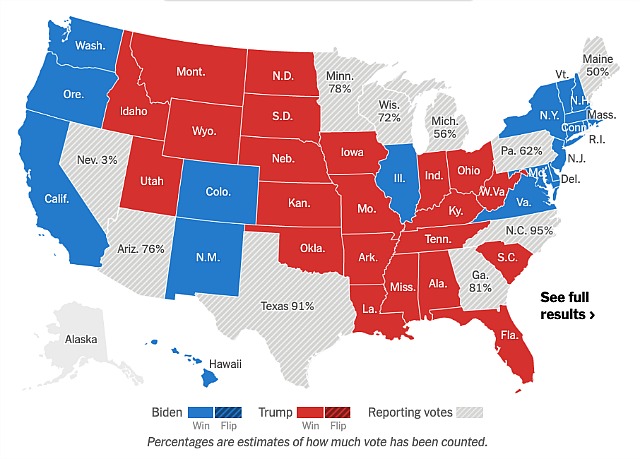 9:10 pm: James Carville to MSNBC viewers — “Come down off the ledge, put away the razor blades and the Ambien….hang in there, we’re gonna be fine. The [final] count is gonna be good for Biden. I don’t mind putting the champagne on ice. I’ve waited four years for this…I don’t mind waiting another four days.”

As of right now (9:20 pm) Biden has 213 electoral votes vs. 136 for Trump. It’s all going to come down to the final tallies in North Carolina, Pennsylvania, Wisconsin, Michigan and Arizona — a good portion of the remaining votes being mail-ins.

7:50 pm: The tight numbers are horrifying. I’m going through an out-of-body experience. I feel like my brain is melting. I’m blaming the pandemic for his horrible evening, because we’re mainly talking about “live” voting and that means mostly Republican votes since righties don’t get Covid.

So yes, mail-in ballots could save Biden-Harris, but their stunning under-performance is mainly due to purported associations between Biden-Harris and hardcore p.c. lefty messaging….wokesters, cancel culture, looters, p.c. fanatics, Critical Race Theory, p.c. hatred of cisgender white guys, “Defund The Police” instead of “Re–Think The Police“, Robin DiAngelo‘s “White Fragility”, the Portland and Seattle marauders, the BLM ers and the Rosanna Arquette metaphor.

Yes, I know — there’s no rational reason to believe there’s strong linkage between the agendas of Joe Biden and odious wokesters, but how else to explain what’s happening?

You can’t tell me anyone gives a damn about Hunter Biden‘s laptop. Are older white cisgender male voters (including Cuban-Americans) afraid of Kamala Harris being President, considering Biden’s advanced age? I believe it has to be the wokester factor. Two years ago an Atlantic article reported that a vast majority of Americans hate cancel culture. Tonight they registered their displeasure, or so I strongly suspect.

Yes, Virginia…the woke left may (I say “may”) have pulled off the seemingly impossible — i.e., getting a compulsively lying, incompetent, sociopathic brute re-elected President of the United States. Maybe. Rank evil may actually triumph again. Trump supporters are voting for a form of social suicide and climate destruction They actually voted to support recklessness, incompetency and stinking-to-high-heaven corruption.

If I was a pollster I would be thinking about ways to obscure or camoflauge my appearance…fake noses, fake beards, fat suits, Woody Allen-styled fishing hats. Mobs with clubs and ax handles will be out looking for them on Wednesday morning, and I wouldn’t altogether blame them.

All along the argument against Trump has been irrefutable, but somehow the radical left has managed to weaken or dilute the argument for Biden, which is ridiculous given that he’s never been and never will be in any kind of wokester pocket. He’s a sensible, practical old-school center-lefty.

I can’t believe this is happening. I’m almost having trouble breathing. This could still come down to mail-in ballots…right? Plus all the predictions about Democrats ending up flipping the Senate in their favor…even that isn’t happening. Lindsay Graham and Susan Collins have been re-elected! Good effing God! 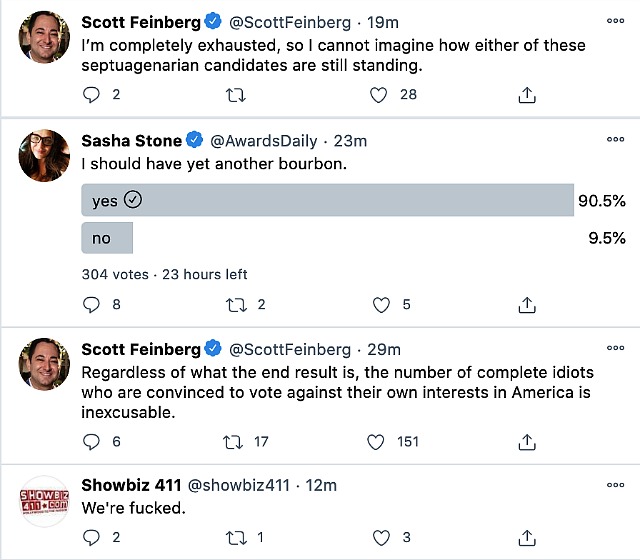 6:55 pm: I don’t like all these close races. Same day voting is favoring Trumo; mail-ins will mostly help Biden. There are nonetheless millions of voters out there who are flat-out loose-screw nihilists…they want to give an incompetent, lying criminal another four years, if only to spite the wokesters.

North Carolina numbers are driving me crazy. Trump has taken the lead in Ohio. Once the Pennsylvania mail-in ballots are counted (probably by Friday), it’ll be okay. I’m nonetheless nervous, anxious, biting my nails. And I’m feeling really angry at the pollsters. I want to literally punch them out.

Friendo: “The polls are off like they were in 2016. There should be a total overhaul of the polling formula. I hope to God this doesn’t extend for weeks and weeks. There’d better not be recounts.” Journo pally: “I’m feeling some 2016 deja vu.”

5:25 pm: A mere Biden victory will not be emotionally satisfying. I want Biden to beat Trump badly, or at least fairly badly. Right now…who knows? And what’s with those Trump-supporting Latino males?

5 pm: Red and blue states are voting accordingly. Biden has 85 electoral votes vs. Trump’s 55. Many millions want the beast to stay in the White House, and many other millions not only disagree but are slapping their foreheads in disbelief.

4:30 pm: This is like Oscar night only much, much better, so I guess I’ll start timestamping with running commentary starting around…uh, now. Biden has taken Virginia and Vermont, and will probably win North Carolina. Oh, and Trump has won Kentucky, West Virginia, South Carolina and…uhm, Indiana. In the cards. Florida will probably go for Trump. (Panhandle rubes + an apparently sizable percentage of Miami-Dade Latino males.) And also Georgia, it seems.

Earlier today from Sam Harris: “What are we getting from the [wokester] left? Exactly the opposite message. Pure sanctimony. Pure judgment. You are not good enough. You’re guilty not only for your own sins, but for the sins of your fathers. The crimes of slavery and colonialism are on your head. And if you’re a cis white heterosexual male, which we know is the absolute core of Trump’s support, you’re a racist, homophobic, transphobic, Islamophobic sexist barbarian. Tear down those statues and bend the fucking knee.”

HE: In other words, Harris was saying the wokesters are almost as much of a cancer and a pestilence as Trump. 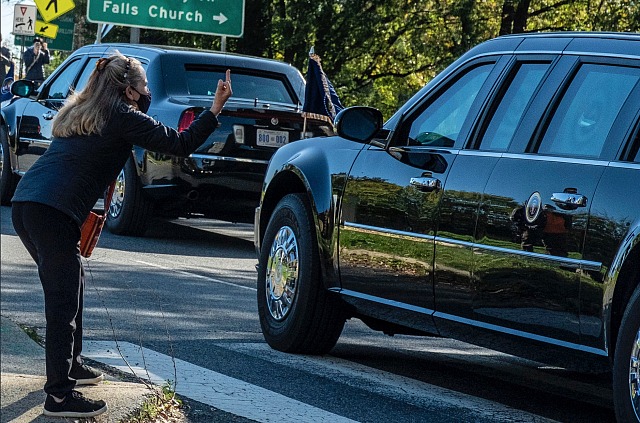 What’s wrong with this photo? Nothing, it’s fine. Except for the minor issue of the bird-flipper’s whitesides.