I realize that Joe Biden‘s odds of winning appear to be reasonably good at this point. 264 electoral votes thus far, and he’ll be at 270 when he wins Nevada. But nothing substantial will be accomplished under a Biden administration with the Senate remaining in Republican hands.

I just can’t wrap my head around the loathsome Susan Collins and Lindsay Graham winning in their respective states (Maine, South Carolina).

So Biden has won Wisconsin and will almost certainly take Michigan and Nevada — 32 electoral votes. Still in doubt are Pennsyltucky (20) and Georgia (16) The idea is that the still-uncounted Atlanta vote eventually might tip Georgia in Biden’s favor, and that the same might eventually happen with the metropolitan Philadelphia vote in Pennsylvania.

Biden can afford to lose Pennsylvania if he wins Arizona, Michigan and Wisconsin. He’s currently ahead in all three states.

He could also prevail by winning Michigan, Wisconsin and Pennsylvania. But Pennsylvania is looking dicey. (To me anyway.) If Biden loses Pennsylvania and either Michigan or Wisconsin, he can still win if (a) the Atlanta vote him a Georgia win and (b) holds on to the Arizona plurality. Right?

“The Remaining Vote in Pennsylvania Appears To Be Overwhelmingly For Biden,” posted three hours ago (6:30 am Pacific) by N.Y. Times Nate Cohen:

“Joe Biden has won absentee ballots counted in Pennsylvania by an overwhelming margin so far, according to data from the Secretary of State early Wednesday. If he carried the remaining absentee ballots by a similar margin, he would win the state.

“President Trump leads by nearly 700,000 votes in Pennsylvania as of 5 a.m. on Wednesday, and Mr. Biden’s chances depend on whether he can win a large percentage of the more than 1.4 million absentee ballots that remain to be counted.

“So far, Mr. Biden has won absentee voters in Pennsylvania, 78 percent to 21 percent, according to the Secretary of State’s office. The results comport with the findings of pre-election surveys and an analysis of absentee ballot requests, which all indicated that Mr. Biden held an overwhelming lead among absentee voters.

“If Mr. Biden won the more than 1.4 million absentee votes by such a large margin, he would net around 800,000 votes — enough to overcome his deficit statewide.” 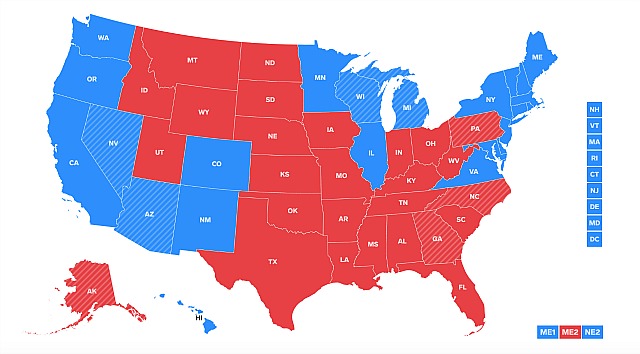