Last night I finally saw James Franco‘s The Disaster Artist (A24, 12.1), which has generated pseudo-hip excitement since debuting at last March’s South by Southwest. It’s basically an amusing-but-never-hilarious thing — it never bored me but it never quite lifts off the ground either. But it’s worth catching, I’d say. It falls under the heading of “necessary viewing.”

On the other hand a lot of cognoscenti who should know better have gone apeshit over The Disaster Artist (what award-season handicapper suggested it might even be worthy of inclusion on a best-of-2017 list?), and I’m telling you right now that it’s time to calm down. It’s fine for what it is, but take it easy.

It’s basically a flat but unaffected true-life saga of the making of a notoriously awful indie-level film called The Room, which, after opening in ’03, gradually acquired a rep of being so bad it’s hilarious and perhaps even brilliant in a twisted-pretzel, ice-cream-cone-slammed-into-the-forehead kind of way.

Based on Greg Sistero‘s same-titled memoir about the making of The Room and his bromance with the film’s vampirish director-writer-star, Tommy Wiseau, The Disaster Artist is basically a curio, a diversion. It generates a kind of chuckly vibe on a scene-by-scene basis, but that’s all.

It might seem a bit funnier if you’re watching it ripped or better yet ripped with your friends during a midnight show somewhere. Or if you’re watching it ripped with producer-costar Seth Rogen and producer Evan Goldberg in a private screening room. I wouldn’t know. I haven’t been high in a long time, but I bet it would help. All I can tell you is that the Academy fuddy-duds I saw it with last night at the London Hotel screening room were chortling from time to time, but no one was howling with laughter or rolling in the aisles.

The Disaster Artist is basically a one-joke thing that says over and over that having no talent and being a total moron is no hindrance to making an attention-getting film if — a really big “if” here — you’ve got a few million to throw around and you’re willing to spend it freely on production and marketing and so on. It also says that if you’re a profoundly stupid actor and generally beyond redemption in terms of knowing how to produce, direct and write it can be “funny” for people to watch you struggle and fail in your attempt to make a shitty little indie drama that no one will pay to see, etc.

But if your film turns out to be “so awful it’s astounding,” the film says, you might have a shot at a certain kind of notoriety.

I’ve never seen a film quite like The Disaster Artist, and I was pleasantly diverted by that realization. “This is really different and perhaps even historic,” I muttered to myself, “so why am I not laughing instead of just guffawing every 10 or 12 minutes?”

If someone were to ask me “should I see it?” I’d say “sure, go ahead…you might even laugh out loud now and then.” James Franco‘s performance as Wiseau is broad and repetitive but strangely memorable, and Dave Franco is pretty good as Sistero. And I enjoyed the supporting performances by Rogen and Allison Brie, and the cameos by Judd Apatow, Sharon Stone, Bryan Cranston, Zach Braff, J. J. Abrams, Josh Hutcherson, Zac Effron, et. al.

All in all I had a half-decent time, but anyone trying to celebrate The Disaster Artist as one of the year’s most outrageously hilarious films has gone completely over the falls in a barrel. It’s good but in a placated, shoulder-shrugging way.

I was told I need to see The Room before seeing The Disaster Artist, but I couldn’t go there. I learned enough about sitting through films made by drab, talentless goons to last me a lifetime. Almost everyone in the world these days wants to be famous, and the fact that most of them don’t have a lick of talent doesn’t matter. They just want to be known, to be talked out, to attract as many Facebook and Twitter followers as possible, etc. Over the last 14 or 15 years the social cancer represented by Tommy Wiseau back in ’02 and ’03 has spread across the land and around the world. Everyone is carrying the same virus in their systems.

The current Metacritic score of 77% is much more in synch with reality than the 94% score on Rotten Tomatoes, trust me.

The movie says at the end that nobody could ever figure out where Tommy Wiseau came from (he always claimed he was from New Orleans) or how he made all his money or how old he was. Well, the following can be found in his Wikipedia bio, and the movie doesn’t even glance at this material, and I mean not a word of it:

“Wiseau is secretive about his early life. In various interviews, he has claimed to have lived in France “a long time ago”; asserted that he grew up in New Orleans, Louisiana; and described having ‘an entire family’ in Chalmette, Louisiana. In interviews following the release of The Room in 2003, Wiseau gave an age which would indicate he was born in 1968 or 1969, but actor Greg Sestero claims in his 2013 memoir ‘The Disaster Artist‘ that his brother’s girlfriend obtained copies of Wiseau’s U.S. immigration papers and found that Wiseau was born ‘much earlier‘ than he claimed, in an Eastern Bloc country in the 1950s.

“In his 2016 documentary Room Full of Spoons, Rick Harper claims to have researched Wiseau’s background and concluded that he is Polish and originally from Poznań.[2]

“In ‘The Disaster Artist’, Sestero asserts that Wiseau revealed to him through ‘fantastical, sad, self-contradictory stories’ that as a young adult he moved to Strasbourg, where he adopted the name ‘Pierre’ and worked as a restaurant dishwasher. According to Sestero, Wiseau described being wrongfully arrested following a drug raid at a youth hostel and being traumatized by his mistreatment by the French police (which led him to immigrate to the U.S., purportedly to live with his aunt and uncle in Chalmette, Louisiana).

“Sestero asserts that Wiseau subsequently moved to San Francisco, California, where he worked as a street vendor selling toys to tourists near Fisherman’s Wharf. Wiseau supposedly gained the nickname ‘The Birdman’ for his unique bird toys, which were only popular in Europe at the time; this led him to legally change his name to Thomas Pierre Wiseau, “taking the French word for ‘bird’, oiseau, and swapping out the O for the W of his birth name”.

“According to Sestero, Wiseau worked a variety of jobs in the San Francisco Bay Area, including restaurant busboy and hospital worker, and ran a business called Street Fashions USA that sold irregular blue jeans at discounted prices. He eventually purchased and rented out large retail spaces in and around San Francisco and Los Angeles, making him independently wealthy. In the same book, however, Sestero admits that the idea of Wiseau becoming wealthy so quickly via the jobs he claims to have had is so unlikely that he himself finds it impossible to believe. Sestero suggests on several occasions that many people involved with the creation of The Room believed the film to be part of some money-laundering scheme for organized crime, but Sestero himself considers this unlikely.

“Sestero recounts that at some point in late adulthood, Wiseau was involved in a near-fatal car crash in California after another driver ran a red light and struck Wiseau’s vehicle; as a result, Wiseau was hospitalized for several weeks. Sestero suggests that this incident was the turning point in Wiseau’s life that led him to pursue his dreams of becoming an actor and director, ambitions that he had long neglected while pursuing financial security. Wiseau’s cinematic influences include James Dean, Marlon Brando, Tennessee Williams, Orson Welles, Elizabeth Taylor and Alfred Hitchcock.” 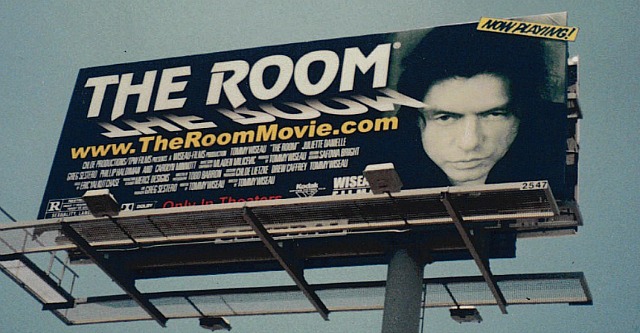