Yvette Mimieux has left the earth. Due respect for an actress who broke through in the early ’60s (The Time Machine, The Light in the Piazza, Toys in the Attic) and who went for broke and gave it hell when she starred in Jackson County Jail (’76), a somewhat schlocky but tough Roger Corman film that mostly holds up by present standards. (I happened to re-watch it only two weeks ago.) Hugs and condolences for friends, fans, colleagues, family.

“I’ll Play What’s Dealt,” posted on 5.22.19 — obviously more of a tribute to Tommy Lee Jones but also a roundabout salute to Mimieux, upon whose shoulders Jackson County Jail mostly rested:

I knew Tommy Lee Jones would be a star of some magnitude after watching him play Coley Blake, a hard-luck loser and accused murderer, in Michael Miller‘s Jackson County Jail.

An above-average exploitation flick, Jail was produced by Roger Corman and released by New World into subruns and drive-ins in the spring of ’76.

Donald E. Stewart‘s script is about a Los Angeles ad exec named Dinah Hunter (Yvette Mimieux) who’s wrongfully arrested in shitkicker country and then raped in a small-town jail cell. She and Blake break out of the slam and go on the run. It gradually becomes apparent that Blake, who wears the shell of an outlaw nihilist, carries shreds of decency and compassion.

Jones’ big climactic scene happens at the end of the clip (starting around 8:30). Blake is running from the law during a small-town 4th of July celebration. The cops shoot him two or three times in the back. He staggers and falls to the pavement alongside an American flag. Blake dies with a long exhalation of breath, just like Stephen Boyd‘s Messala in Ben-Hur.

When the film ended I knew right away that Jones, 29 when the film was shot, was X-factor and waiting to happen.

You can stream Jackson County Jail on Amazon, but only in standard def. 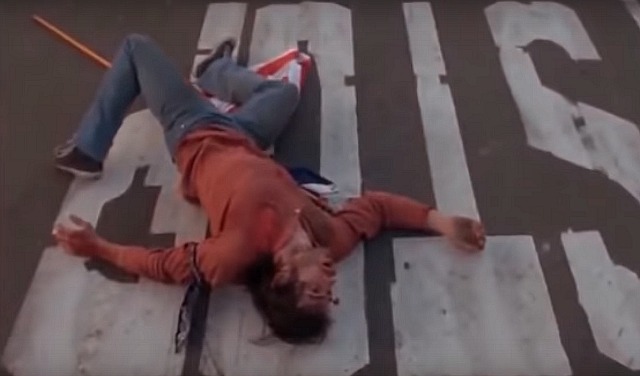 Wiki excerpt: “Jones moved to New York to become an actor, making his Broadway debut in 1969’s A Patriot for Me. In 1970, he played a Harvard student in Love Story. In early ’71, he returned to Broadway in Abe Burrows‘ Four on a Garden where he shared the stage with Carol Channing and Sid Caesar. Between 1971 and 1975 he portrayed Dr. Mark Toland on the ABC soap opera, One Life to Live. He returned to the stage for a 1974 production of Ulysses in Nighttown with Zero Mostel. It was followed by the acclaimed TV movie The Amazing Howard Hughes, where he played the lead role.” 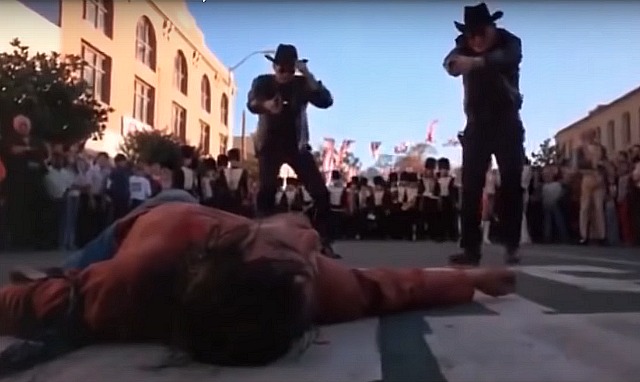