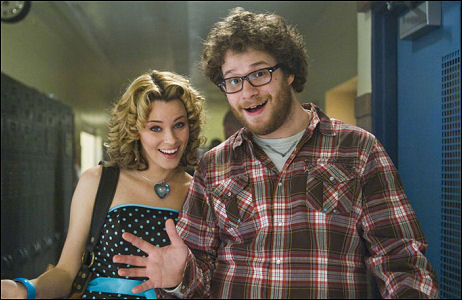 Call this one definitely better (and certainly more smoothly shot and cut) than Clerks II, heads and shoulders above Jersey Girl, a bit funnier than Jay and Silent Bob Strike Back, livelier and more entertaining that Dogma, almost as intimate and touching as Chasing Amy, much better than Mallrats and not as good as the original Clerks.

Within his familiar smart-but-easygoing-schlub persona, Rogen is on a roll these days, incapable of seeming rote or insincere, and he punches up the energy and aliveness in a way that’s obvious and ummistakable. And Banks matches him note for note with a game receptivity and good humor. As I was walking out, a journalist friend said, “Smith should thank God for Judd Apatow and Seth Rogen,” meaning that Smith is sorta kinda riding their coattails with this film, albeit in a way that bears his own ethos and sensibility.

Zack and Miri grooves right along in a good-natured, “let’s relax and be cool about being blunt and more than a little gross” sort of way.

It struck me as a little bit weird that the sex scenes are shot with a static camera sitting on a tripod each and every time. Hand-held photography is obviously the way to go with films of this sort — get in there, get close, get it all, etc. But then none of Smith’s films have been shot with a loosey-goosey hand-held approach — visually he’s always been a very formal, almost rigid, director — so I guess it does sort of make sense.

It’s obvious that Zack’s scripting the sex scenes so that Miri won’t “do” anyone other than himsefl on-camera, and Miri being distinctly unsettled when Zack is offered an easy roll in the sack with one of the pic’s female costars, that they care deeply for each other.

It’s unrealistic, of course, that a hottie like Banks would be attracted to a schlubby guy like Rogen (unless we’re talking about the real-life Rogen, which is a whole different deal because then you’re talking a guy who’s bright, funny, famous and rich). But then Apatow has been pulling this fantasy crap in film after film, and now Smith (another rich, brilliant, super-successful geek with a weight issue) has picked up the torch. 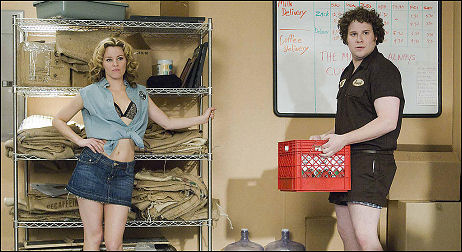 In the real trenches of the real world, average overweight geeks do not schtup beautiful blondes with radiant ruby eyes, exquisite facial structure and perfect white teeth — end of story, end of proposition, total dreamworld. But the fact that this doesn’t get in the way of enjoying Smith’s film says something. To me anyway.

Rewritten Issue: At the end of Zack and Miri’s sex-on-camera scene, Banks sits up and starts collecting herself — we’re talking seconds after Rogen has dismounted — and we see that she’s wearing a short jean skirt. I would find this believable and even mildly hot if it happened in a Sam Mendes film (because failing to get fully undressed prior to sex is a natural sort of occurence), but I don’t believe for a second that Smith’s characters — hand-to-mouth GenXers from Grimville, Pennsylvania who are looking to make money by shooting a sex film that will sell — would get down on camera with the woman wearing a pushed-up jean skirt. No. Effin’. Way.