I wanted to see Gravity on a really huge IMAX 3D screen so I caught it last night at the AMC Universal CityWalk plex. It played just as well the second time. Not all that differently from my first viewing at Telluride’s Werner Herzog Cinema, but I was able to appreciate the expert crafting and shaping all the more. It’s a very, very high-end thing. I tried counting the number of times Sandra Bullock goes “aaahh!” It might be only 20 or 25 but it felt like 45 or 50. The only bad part of the show was sitting through one giant-sized IMAX trailer after another for a series of blunt, rib-thumping action-fantasy flicks — Ender’s Game (awful), Jack Ryan: Shadow Recruit, 47 Ronin (swords and robes), The Hobbit: The Desolation of Smaug (same old crap). At least I didn’t have to sit through trailers for Thor: The Dark World and The Hunger Games: Catching Fire.

I’ve always hated Universal CityWalk. Coarse, lowbrow, overwhelming, garish, fatiguing. Ground Zero for people who would flinch at the idea of watching All Is Lost or Blue Is The Warmest Color. It’s the ideal place for people who mainly want to watch primitive genre films. I was riding on a garage elevator with seven or eight kids and was telling myself, “Concentrate on the things you have in common with these guys…don’t get into a twist about how exotic they seem.” On top of which an IMAX ticket costs $20 bucks plus the lowest parking fee is $15. Plus I waited through 25 minutes of bumper-to-bumper traffic to just get to the booths where you have to pay. $35 for front-gate parking and $25 for preferred parking?

CityWalk is basically a huge outdoor club and these are the entrance fees. People want to hang at the club — they actually like it there — and they accept that every club has a door fee. This is why they pay it. Three or four people in the car, a few bucks each. But for a guy on his own, $35 bills seems like a pretty heavy hit just to see a movie. I got a popcorn besides and that cost $7 so make it $42 bucks. 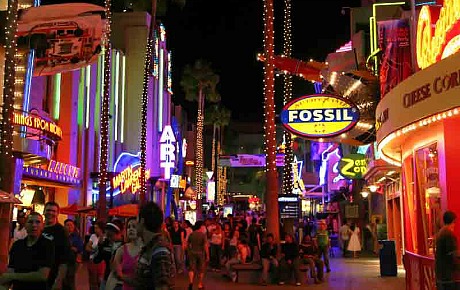