43 Comments
A Nice Shocker Or Two

“And the Oscar goes to…(tear, rip, shocked expression)…oh, God…the Oscar, ladies and gentlemen, goes to someone that Scott Feinberg and Michael Musto were predicting to win but which almost everyone else felt was a long shot, at best!”

All I want from the 3.2 Oscar telecast is an upset. I want someone to win that most of the Gurus of Gold and the Gold Derby gang never saw coming. One would be nice, two would be better.

Punishing Cate Blanchett for the Woody Allen contretemps is absurd, but a part of me will be delighted if Amy Adams takes the Best Actress Oscar from her. Because upsets are exciting!

I know Leonardo DiCaprio isn’t going to win the Best Actor Oscar but if he does (because he effing deserves to, because his Wolf of Wall Street performance is landmark)….well, okay!

What upsets are at least a bit more than possible? Which ones might actually happen? I’m asking.

[My British Airways flight is about to take off from JFK as we speak. Six hours of wifi flatlining await.]

Since the Dylan Farrow letter was published people have noted an inconsistent posture on Mia Farrow‘s part — condemning Woody Allen for allegedly abusing Dylan as well as cradle-robbing Soon-Yi but being a friend and supporter of Roman Polanski, who’s had similar mud thrown his way. Two days ago Farrow tweeted that she’s “not” Polanski’s friend. Really? Pop in the Criterion Bluray of Rosemary’s Baby (released on 10.30.12) and watch the “making of” documentary, in which Farrow speaks very admiringly of Polanski’s method and artistry in the directing of that 1968 film. Maybe they don’t converse regularly and have dinner every other week, but Farrow is obviously in RoPo’s corner. What, did she change her mind after taping her interview? The proof is in the pudding.

This morning a Hollywood Reporter/Scott Feinberg piece appeared about Paramount’s “It’s Awesome!” billboard on behalf of The Wolf of Wall Street. Obviously this isn’t intended to reach Academy voters who might be dithering about whether to vote for Gravity or 12 Years A Slave or American Hustle. Okay, maybe it is but it seems aimed at the “too shallow to get it” crowd. — i.e., .the popcorn-munchers who have been enjoying Martin Scorsese‘s film for “the wrong reasons.” If it was my call I would have had the poster say “It’s Effing Brutal!” Meaning, of course, that it uses Jordan Belfort‘s saga to characterize the one-percenters and the Wall Street community as contemptible thieving pigs. Three other Wolf billboards praise the film in a more traditional fashion, calling it “The Movie Of Our Time,” “Bold Brave Classic” and “His Best Performance Ever.” 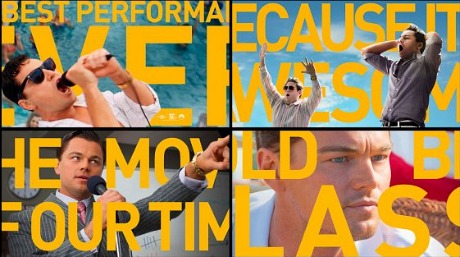 “No aspect of the Beatles first U.S. visit looms larger in legend than their initial appearance on The Ed Sullivan Show, a performance (actually two performances, since Sullivan was cagey enough to put them on at both the beginning and the end of the program in order to keep the audience tuned in throughout) witnessed by an estimated 73 million television viewers — about 38% of the entire U.S. population at the time. Legends that large often spawn their own sub-legends, in this case the claim that the Beatles so transfixed and charmed their youthful audience that the entire teenage population of the U.S. remained on its best behavior for that one hour, and not a single hubcap was stolen anywhere in the country between 8:00 PM and 9:00 PM on February 9, 1964.

“Now that [Phillip Seymour Hoffman] is gone, much has been said about his failure, about his fall,” writes N.Y. Times columnist David Carr in a recent post. “I don’t really see it that way. He got in the ring with his addiction and battled it for two decades successfully, doing amazing film work for years and doing the hard stuff to keep ambitious theater alive in in New York.

“And then something changed and he used. Everyone is surprised when that happens to someone famous, but it happens routinely everywhere else. Rooms of recovery are full of stories of people with long-term recovery who went back out and some of them, as a matter of mathematics and pharmacology, don’t make it back.

“I have no certainty about what went wrong, but I can tell you from personal experience that what happened was not the plan. I have been alone in that room with my addled thoughts, the drugs, and the needle. Addicts in the grip always have a plan. I will do this, get this out of the way, and then I will resume life among the living, the place where family, friends and colleagues live. He didn’t make it back to that place.”

I’ll be doing the Berlinale for five days (Wednesday through Monday morning), mostly to cover the premiere of Wes Anderson‘s The Grand Budapest Hotel but also to hit the festival on my own dime. All Virgin America flights have decent (if costly) wifi so I’ll be in good shape for my 10:30 am JFK-bound flight out of LAX. It arrives at 7 pm Eastern, or roughly two hours before the 9:30 pm British Airways flight to London. American Airlines is offering trans-Atlantic wifi these days but British Airways, alas, doesn’t so I’m looking at seven hours of ennui, isolation and darkness. The flight arrives at London/Heathrow at 9:30 am Wednesday (1:30 am Pacific). The two-hour flight to Berlin leaves around noon and arrives at 3:30 pm (6:30 am Pacific). 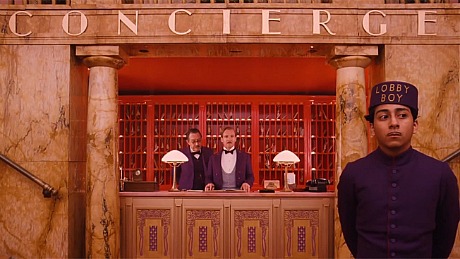 I took this shot yesterday afternoon on the 20th Century Fox lot. It occured to me that the artist and Fox management must have argued about including “Die Hard 1988” in the lower left corner. The artist almost certainly felt that the image spoke for itself (art pour l’art) but some tedious management guy wanted the title and the year of release mentioned for the sake of the rubes. “We’re on a high-security production lot!” the artist probably argued. “You have to be a working industry person to be walking around here. Who’s not going to know what this is?” The artist was right, of course. The lower left diminishes the overall. 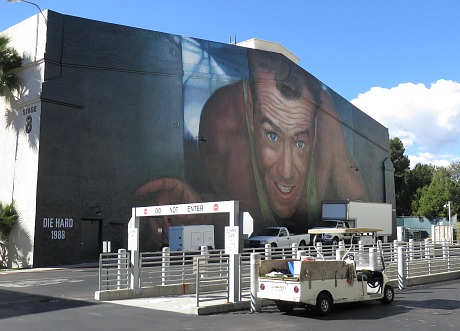