In June, Warner Home Video will finally cough up a DVD of one of the most intriguing late-’60s era films ever made: Richard Lester‘s brilliant, wonderfully textured, time-jumpy Petulia (1968). (WHV has it on the DVD market in England right now.) It’s about an impulsive, airy-fairy wife (Julie Christie) half- cheating on her stiff-necked husband (Richard Chamberlain) with a vulnerably grumpy divorced surgeon (George C. Scott) whom she’s deeply in love with…as far as it goes. Shot in San Francisco during the flower-power summer of ’67, Petulia mixes antsy energy with a bittersweet tone of regret about slipped-away love.

A Senses of Cinema essay by Peter Tonguette says that Petulia represented “the last gasp of Lester’s explicit engagement with present-day life. After it would come the masterful apocalyptic satire of The Bed Sitting Room (1969), which today looks symptomatic of a trend Pauline Kael identified in the mid-’70s: ‘At a certain point in their careers — generally right after an enormous popular success — most great movie directors go mad on the potentialities of movies,’ Kael observed. ‘They leap over their previous work into a dimension beyond the well-crafted dramatic narrative; they make a huge, visionary epic in which they attempt to alter the perceptions of people around the world.’ Kael wrote this in a review of Bernardo Bertolucci‘s 1900 (1976) — characteristic of this tendency if any film ever was — and goes on to site works such as D.W. Griffith‘s Intolerance (1916) and Abel Gance‘s Napoleon (1927). The Bed-Sitting Room was “a massive failure on every level and, not unlike the directors of other magnificent follies, he was punished for it; a full four years would go by before Lester directed a feature film [i.e., The Three Musketeers] again.”

Well, whoop-dee-doo…Universal production chief Stacey Snider made a firm call on Sunday to become chief executive and co-chairperson of DreamWorks…as if everyone was on pins and needles wondering if she’d stay with Universal. (Hah!) Snider will share the same creative and corporate authority that DreamWorks founders David Geffen and Steven Spielberg hold, and will report directly to management genius Brad Grey, the chairman and CEO of Paramount, which bought DreamWorks in December for $1.6 billion. The Snider thing was a Geffen move, of course. Hiring Snider was Geffen basically giving NBC/Universal’s owner General Electric (and its chairman and CEO Jeffrey R. Immelt) a hale and hearty f.u. for failing to deal in a more assertive and forthright way when a purchase of DreamWorks was being mulled by Universal last year. Like all corporate owners of entertainment companies, G.E. is basically a bean-counting operation without a lot of enthusiasm for entertaining or movie-making, and Geffen has taken advantage of that element of vague corporate suffocation by offering Snider a somewhat more creative, hands-on job with a bit more time off for her kids. With Geffen and Spielberg’s assent, Snider will be able to greenlight projects with budgets up to $85 million.

If someone wants to give me free-of-charge a Blu-Ray or HD-DVD player, a big stack of high-def DVDs and a really good high-def widescreen TV, I’m an instant fan. But having seen demon- strations of both Sony’s Blu-Ray high-def player and its Toshiba-manufactured HD-DVD competition, I can honestly say that the difference between them and how DVD’s look right now on my big Sony flat-screen is noticable, yes, but not stunningly so. High-def is very cool, but it doesn’t quite make you wet yourself. The only ones who will shell out for these goodies are rich industry elitists (producers and directors like Mike DeLuca, Rod Lurie, Bennett Miller) and money-to-burn tech-heads of a certain age looking to impress girls and friends. In short, a micro-sized sliver of the buying public.

No Comments
Profile of an eternal lightweight…a

Profile of an eternal lightweight…a guy with not even a trickle running through him, much less a river.

February 26, 2006 3:04 pmby Jeffrey Wells
No Comments
No question that the Criterion

No question that the Criterion Collection’s high-def transfer of Robert Bresson’s Au hasard Balthazar 1966) is one of the most beautiful ever seen. But I don’t get the website claim that says the image is “presented in its original aspect ratio of 1.66:1.” Looks more like 1.75 to 1 to me, and damn close to 1.85 to 1. Consider the shot below (top) of the opening image from Warner Home Video’s DVD of Stanley Kubrick’s Barry Lyndon, as it appears on my own TV. This, according to the info provided by WHV, is a 1.66 to 1 image, and my trained eyes have understood the same for years. The bottom shot is from Criterion’s Balthazar disc, and if you look back and forth between the two, you’ll notice the Lyndon is a little bit taller. How can these two differ if Criterion and Warner Home Video say they’re both 1.66 to 1? 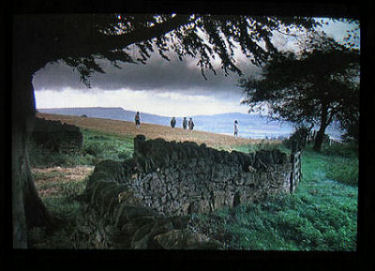 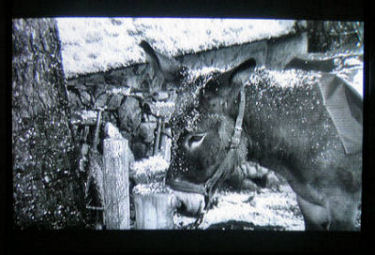 Running Scared‘s Paul Walker, who acted in Clint Eastwood‘s Flags of Our Fathers last year, says, “I grew up on Eastwood [but] I was afraid that I was going to be completely let down. I’d heard nothing but good things about him, but I guess I’m a bit cynical. Like, who’s going to talk trash about Clint Eastwood? I mean, c’mon, the guy’s on top of his game right now, you have no choice but to say you like him. But you know, he is a good guy. He’s not real wordy. He’s not the kind of guy that likes to waste his breath. But when he opens his mouth, everyone’s hanging on his every word.” — from a profile by the Philadelphia Inquirer‘s Stephen Rea.

No Comments
I spoke to Lamont Johnson

I spoke to Lamont Johnson a few minutes ago, and he says the cut of The Last American Hero that Pauline Kael saw and reviewed back in early ’73 ran “10 or 12 minutes” longer than the 95-minute version of the current Fox Home Video DVD. He doesn’t know if the longer version exists anywhere, but his agent might.

Prosecutors are squeezing “Hollywood superlawyer” Bert Fields with “evidence” against Fields and/or his partners regarding arrangements Fields may have made with Anthony Pellicano that may have involved illegal wiretapping, according to a N.Y. Times story by David Halbfinger and Allison Hope Weiner. They want him to spill, of course. The net is closing. Perspiration beads are forming.

Yesterday morning’s projection about Madea’s Family Reunion was accurate: Box Office Mojo is estimating that Tyler Perry‘s film will finish the weekend with $30.3 million. And that Frank Marshall‘s Eight Below, an inoffensively decent dog movie, will earn $15.7 million for a cume of $45.1 million, and that Shawn Levy‘s The Pink Panther…forget it.

Marc Weingarten‘s N.Y. Times article about Lamont Johnson‘s The Last American Hero being revived as a DVD release 33 years after being dumped, re-cut and then re-released by 20th Century Fox in 1973 is an okay recap, but it leaves out a significant detail. He reports that while Johnson was out of the country following the film’s initial release, “Fox made a number of edits [and] renamed the movie Hard Driver and released it in a few theaters in the South in spring 1973.” Then Pauline Kael wrote “a glowing review for The New Yorker,” saying that The Last American Hero “isn’t about stock-car racing, any more than The Hustler was only about shooting pool” and pleaded with “someone in the head office at Fox” to restore the cuts. Fox ignored her request and “viewers still won’t get to see Mr. Johnson’s cut” on the DVD, Weingarten reports. Fox Home Video spokesperson Steven Feldstein tells Weingarten, “We made an effort to stay true to the theatrical release.” Spoken like a typical corporate stooge. (When I called Feldstein out of the blue last summer and asked about the chances of Hero being released on DVD, he said, “This is ours? It’s a Fox movie?”) The question Weingarten doesn’t even ask, much less attempt to answer, is whether Johnson’s original cut still exists in some form. If a print of this version exists, wouldn’t it be worth the effort to try and restore it before it’s too late? As Johnson tells Weingarten, The Last American Hero experience “remains one of the best times I ever had making a film, and one of the worst experiences I had working with a studio.”

Don Knotts‘ N.Y. Times obit says he was one of the original cast members of “The Steve Allen Show,” the comedy-variety show from the mid to late ’50’s, and was one of a group of memorable comics backing Mr. Allen.” But it says nothing about Knotts’ “Mr. Morrison” character, and not getting into this a little is like writing a Lana Turner obit without mentioning William Wilkerson and Schwab’s drug store. On the Museum of TV Broadcasting site, it says that “Allen’s man-in-the-street interview segments launched the careers of comedians Bill Dana, Pat Harrington, Louis Nye, Tom Poston and Don Knotts. Probably the best remembered character was the nervous Mr. Morrison portrayed by Knotts. Often Morrison’s initials were related to his occupation. On one segment he was introduced as K.B. Morrison whose job in a munitions factory was to place the pins in hand grenades. When asked what the initials stood for, Knotts replied, ‘Ka-boom!’ Invariably Allen would ask Morrison if he was nervous and always got the hyper-fast ‘No!!’ reply.

“I would love to see Robert Altman take the stage at the Oscars next Sunday and give this speech: ‘I thank Hollywood and The Academy for absolutely nothing, and I dedicate this award to Ingmar Berman, Alfred Hitchcock, Martin Scorsese, Stanley Kubrick, Akira Kurosawa, Orson Welles and Frederico Fellini — all of whom, like myself, succeeded primarily outside the Hollywood circle, and have never been recognized by the Academy for any achievement whatsoever.’ Then he would leave the Oscar on the podium as he walks off the stage.” — a reader identified as “III Rathbun.” (In fact, Welles shared the Best Original Screenplay Oscar with Herman J. Mankiewicz for Citizen Kane, and Kubrick won a Best Visual Effects Oscar in ’69 for 2001: A Space Odyssey.)