The special thrill and value of flying six thousand or so miles to Cannes to personally witness, in part, the rooty-toot-toot Dreamgirls shebang that happened tonight at the Martinez Hotel (which I enjoyed very much, by the way — the four scenes that were shown were seriously killer wham-bam)…where was I?…oh, yeah…the value of seeing this presentation in Cannes is diminished somewhat by David Poland having seen the same thing back in Los Angeles. (But not, I’m told, by way of DreamWorks publicity.) In fact, it sppears he saw it earlier than the Cannes gang did because he managed to post his reactions earlier than me or anyone else who attended in Cannes. This sounds petty, I realize. 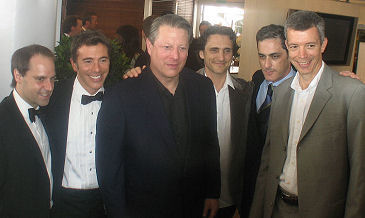 (a) Jeff Skoll, founder and CEO of Participant Productions, and PP president Ricky Strauss to the right (i.e., viewer’s left) of Inconvenient Truth-teller Al Gore, with producer Lawrence Bender to his immediate left and Paramount Vantage honcho John Lesher next to Bender, all gathered at a beach party that kicked off early this evening in Cannes to celebrate the launch of Paramount Vantage — Friday, 5.19.06, 6:40 pm; (b) If I were this car, my feelings would be hurt and I would probably have a case of very low self-esteem despite the likelihood of my movie earning about $70 million this weekend and $200 million worldwide — Friday, 5.19, 8:25 pm; (c) Paramount Pictures chairman Brad Grey at today’s Paramount Vantage party — Friday, 5.19.06, 7:10 pm; (d) Waiting in line in front of the Salle Debussy — Thursday, 5.18.06, 7:50 pm; (e) Dreamgirls star Beyonce Knowles flanked by fans, bodyguards and DreamWorks publicist Mitch Kreindel following screening of Dreamgirls footage plus a live pep talk by director Bill Condon, producer Larry Mark and cast at Hotel Martinez — Thursday, 5.19.06, 9:50 pm; (f) professional facing some kind of difficult work load in Orange Cafe inside le Grand Palais — Friday, 5.19.06, 5:10 pm; (g) On the Croisette, two blocks west of the Carlton during an aimless wander — Thursday, 5.19.06, 5:10 pm
May 19, 2006 3:18 pmby Jeffrey Wells
No Comments 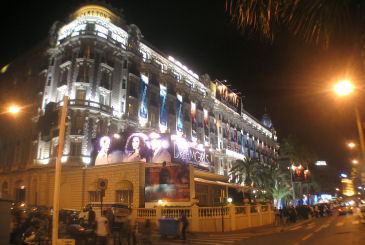 (a) Cannes’ Carlton Hotel last night around 10 pm or so, at which time I was wandering around and fried with nothing to do, having mislaid the piece of paper with location of the Paris Je’taime party — Thursday, 5.18.06, 10:10 pm; (b) Pedro Almodovar and the Volver crew entering this morning’s press conference — Friday, 5.19, 11:36 am; (c) Some of the festival’s more serious boozers (with a high percentage of British journalists) hang out every night at the Petit Carlton, where a bottle of Desperado beer will cost you about five Euros; (d) Taking a quick break and looking out at the Med — Friday, 5.19.06, 11:05 am.
May 19, 2006 8:49 amby Jeffrey Wells

Snakes on a Plane buzz is dropping. It’s peaked! The juice it had two months ago is evaporating! Or at least, that’s what Marketing Prof’s Matt Collier believes. “The key concern all along was that perhaps this was a case of buzz-building too soon for a movie that was still five to six months away from release. As the Alexa traffic for Snakes on a Blog, the ‘unofficial’ fan site for the film suggests here, the buzz for the B-movie appears to be fading. As New Line is learning the hard way, perhaps the only thing harder than building buzz for a movie, could be sustaining it.” I think everyone knew from the get-go that the Snakes buzz wouldn’t sustain. The idea all along, in fact, was that New Line’s marketing campaign would start revving up sometime in early to mid July and get the hype going again. 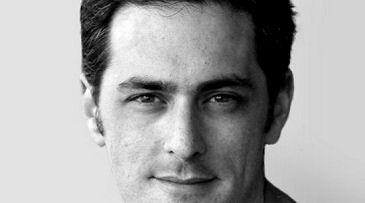 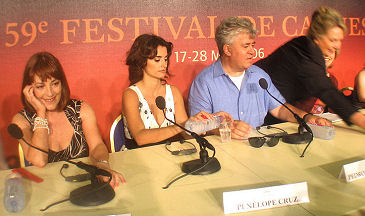