“Look…it’s a bird!…it’s a plane!…it’s a young, well-built, good-looking man who resembles Chris Reeve as he looked 28 years ago in a blue skin-tight suit with a red cape and boots and a very large erection, flying across the sky!”…yes!. (For the knee-jerkers out there, the exclamatory sentence I’ve just written — wrote last night, I mean — is not an example of straight intolerance of gay echoes or subtexts in mainstream films but (in my head, at least) a goof on that syndrome. Straight reactions are obviously reflected in John Horn‘s L.A. Times piece about perceived homoerotic subcurrents, reflections and cushion-shots in Bryan Singer’s fantasy film.

Roger Friedman‘s item is correct, according to the script: the scene where this is revealed is the last one in the movie (or at least it was in the script I read) and I thought was quite well done. In the context of the movie this subplot works okay, but if they intend to make a successful franchise out of this I’m not sure how they will navigate around the idea of a super-powered brat flying around with Daddy in sequels . It’s really the sort of thing they should’ve done to give closure to the franchise, but this will likely be the first of many new Superman films. Can you imagine if they saddled Connery’s Bond with a kid at movie # 5? The Bond films would’ve never had any legs, not that I’d really miss them. The problems with Superman Returns, however, lie less with who the child’s father is and more with the movie as a whole . It is still one big, awkward Richard Donner backslap (as I told you in a previous email) and is pretty
much Superman: The Movie with a ‘who’s the Dad’ subplot.” — C.K. 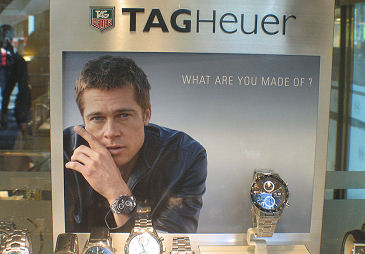 (a) Paris plex onBoulevard des Capucines des Italiens, right around the corner from the old Paris Opera — Friday, 6.2.06, 1:10 pm; (b) UIP screening room on rye Meyerbeer, where I saw La Rupture at 1:30 pm today — it has the most comfortably upholstered screening-room seats I’ve ever sat in, bar none; (c) Un object d’pasta in storefront window — Friday, 6.2.06, 3:40 pm; (d) Two turns of a streetcorner and about 150 yards from UIP screening room;(e) Lunch-hour crowd at Indiana; (f) Forget the “Lucky” and the “Number” — just Slevin will do.

Focus Features is screening Allen Coulter‘s Hollywoodland (9.6) on both coasts, and since I’ve written so much about its development (the death-of-Superman drama used to be called Truth, Justice and the American Way) over the past two years, it’s heartening to report that the reactions so far have been pretty good. “I thought it was a very solid piece of work, a noirish murder mystery with lots of Chinatown and L.A. Confidential influences,” says a Manhattan- based journalist. “Adrien Brody (who is excellent) plays a down-on-his-heels P.I. who is hired by the recently deceased George Reeves‘ mom (Lois Smith) to investigate whether he was murdered or committed suicide. Brody’s story is intercut with Reeves’ (Ben Affleck) back-story, particularly the latter’s frustrating attempts to be recognized as a serious actor, along with his affair with a wife (Diane Lane ) of a big MGM executive (Bob Hoskins). There’s also very solid character work from Robin Tunney as Reeves’ slutty fiancee, and Jeffrey DeMunn as his loyal agent. The film runs 126 minutes, with a pretty smart screenplay, and it could probably be cut a bit.” An L.A. correspondent agrees “it could be cut”, but says “it’s quite good and high entertaining…it definitely has that L.A. Confidential tone and delves into a lot of speculation about whether Reeves was killed by MGM, or maybe died accidentally, or commited suicide. Ben Affleck totally comes off the way George Reeves was, a nice, well-liked fellow who wasn’t Laurence Olivier, but the film belongs to Adrien Brody. There’s a subplot with Brody’s character trying to get closer to his son who is devastated by Superman’s death that pays off really well.” The New York guy adds that “Brody proves agains that he can definitely carry a whole picture.” He says that “the only thing I couldn’t figure out is Affleck’s performance? Is he just a bland actor without talent, or he is simply playing one? I’ve never had a problem with him in the past, but he seemed to be a black hole at the center of the film. Then again, maybe that was calculated.” The L.A. guy says, “I think that Affleck’s performance feelign that way is calculated…he’s playing a nice-guy actor who’s frustrated…there’s a great sequence in which Reeves is being watched by a preview audience as he acts in From Here to Eternity, and everyone goes ‘Oooohhh, there’s Superman! there’s Superman!’ and the director (or whoever it is) says to an assistant, “Cut him out.’ It’s a sad moment…you feel for him.”

Fox 411’s Roger Friedman is running an item about a possible paternal plot twist in Bryan Singer’s Superrman Returns (Warner Bros., 6.28), which is Brandon Roush‘s Caped Crusader is (or eventually becomes) a dad over the course of the film. “Previews already show that Lois Lane, played by Kate Bosworth , has what looks to be a four-year-old son and no husband,” writes Friedman. “The only other candidate for fatherhood would be Perry White’s son, Richard (James Marsden). But that not only makes little sense, [but] has a low-level function for a dramatic reveal. You can only imagine Lois screaming to Superman when the boy is in peril, ‘But Clark, he’s your son!'”

A 5.25 New Republic piece about the attempted swift-boating of Al Gore and An Inconvenient Truth.

Good God…The Breakup got only a 19% creme de la creme positive rating on Rotten Tomatoes, and a lousy 30% from the general pool. The domestic weekend take is supposed to be in the low 30s, except for the word-of-mouth factor, which looks like it’ll be dismal. (The Atlanta Constitution‘s Eleanor Ringel Gillespie said that “watching these likable actors flounder around as they try to save a picture that’s not worth saving is, well, depressing.”) Is a sharp Friday-to-Saturday drop-off in the cards? Whoa…I was just told about a 1 pm screening at the UIP screening room on rue Mayerbeer (near the Opera)…heading there now, back later. 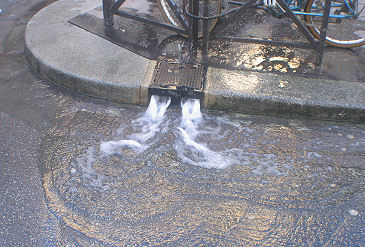 All over Paris each morning, the streets (many of them, but not each and every one) are given a water-soaking, with gallons upon gallons of the stuff spewing into gutters, which strikes me as kind of wasteful — Friday, 6.2.06, 8:20 am.

(a) Video-store ad for recently-released DVD of Tommy Lee Jones’ Trois Enterrements — Thursday, 6.1.06, 8:55 pm; (b) A nice little place on rue Risseau called le Cave; (c)…and some of the patrons who happened to be there when I walked inside — Thursday, 6.1.06, 9:25 pm; (d) There’s a tiny little cavity area in a tuna fish where all the basic organs lie, and then there’s this big, super-chunky tuna-meat body around it…until today I never bent down to actually look inside one;(e) The nutritional benefit of fish heads are what exactly?…are you supposed to grind them up and feed them to your cat?; (f) opposite the stairway leading down to the Jules Joffrin metro in the northern section of the 18th.

“He’s virtuous, he doesn’t lie, and he’s handsome! And I think these are, these are idealistic qualities in the male that you, in someone that you’d want as a husband, I’d imagine .” — Superman Returns director Bryan Singer on his lead character, quoted by N.Y. Times profiler Michael Joseph Gross.