With everyone doing articles about established film critics getting whacked or demoted and/or losing their influence because they’re thought to be out of touch with the cyber generation (here’s an argument against that myth by Entertainment Weekly‘s Owen Gleiberman), I naturally presumed that a forthcoming book by recently dismissed Daily News film critic Jami Bernard called “The Incredible Shrinking Critic” would be about this syndrome. And it’s not. It’s a book about Bernard’s “excellent adventure in weight loss.” It’ll probably sell, come to think of it. (Sorry for misspelling Ms. Bernard’s first name in an earlier edit.)

Hollywood Wiretap is linking to JoBlo.com’s 6/12 posting that Paramount Pictures has bumped David Fincher‘s Zodiac out of its previous mid-to-late November slot to January 2007, even though I reported evidence of this date change three days ago (i.e., Sunday, 6.11). I’ve since been told by Paramount publicity that the Zodiac bump was decided upon months ago, even though right now the IMDB still has it listed as an 11.22.06 release. This is a long and ambitious real-life whodunit with quality-level actors (Jake Gyllenhaal, Mark Ruffalo, Robert Downey, Chloe Sevigny) that screams “fall or holiday release.” Okay, it has additional shooting scheduled, but it’s only mid-June with six and a half months to go before December 31st. There’s simply no reason to bump a movie of this calibre out of the fall or year-end release sked unless the studio has determined that (a) critical support might be spotty or (b) it’s not enough of an “audience film”. (Traditionalists might have issues with a period drama about chasing a serial killer who doesn’t get caught or face the music in any significant way at the finale.) Paramount is obviously feeling qualms of some kind, and I’m betting there are a lot of disap- pointed fans out there. I’ve read the script and written a piece about it. I can’t see how it wouldn’t be some kind of fascinating, high-quality ride, given the Fincher sensibility and all. How much of an uncommercial mixed bag can it be?

So what happened to the heat over Nacho Libre? Last month I kept hearing that audiences were laughing at the trailer, that it was the summer’s big comedy slam-dunk, etc. I hope I’m not stepping into another Break-Up situation, but recent tracking on Nacho Libre (Paramount, 6.16) indicates a not-that-great opening weekend. Maybe a little more than $20 million, I mean. There’s a chance, in fact, that The Fast and Furious: Tokyo Drift (Universal, 6.16) might ace it out. Another film that’s not looking all that vigorous is The Devil Wears Prada (20th Century Fox, 6.30). Hold on…what happened to the hairdresser bandwagon? I thought every hairdresser in the U.S. and a portion of his/her clientele was going to catch Prada over the 4th of July weekend. Maybe that’ll happen, but the figures say a sizable audience isn’t forming in support of poor Prada as an alternative to Superman Returns. You could argue and say, “Hey, what’s wrong with an opening weekend gross in the mid teens?” Well, there’s nothing “wrong” with it, exactly…

Taking time out from Cinevegas this evening to see Nacho Libre at the Orleans megaplex in Las Vegas…the moment arrives. 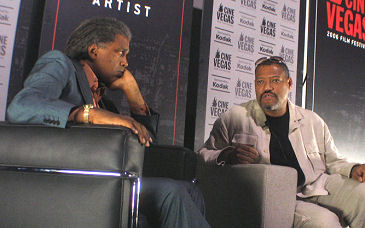 Ann Coulter vs. George Carlin on Jay Leno Wednesday night…this ought to be good, right?

AICN is quoting from a forum commentary written by longtime Danny Elfman orchestrator Steve Bartek on his own website that Elfman has removed his name from the credits of Nacho Libre (Paramount, 6.16). “A couple of the main cues we spent lots of time on were taken out and replaced with music Danny didn’t want to be associated with,” Bartek reportedly wrote, “and I believe he was upset about the way the studio treated him in doing the replacement — not very above-board — so most of the score is still Danny’s but his name will not be there.” Not on the closing credit crawl, he means? Elfman’s name is still listed on the IMDB as the film’s composer.

“Toshiba has introduced a $500 HDTV player that, at least for now, can only play movies from three major studios. Later this month, Samsung will release the first Blu-ray machine, which will be able to play more movies, but it is expected to cost about $1,000. Technical hurdles were behind Pioneer’s decision last week to delay the release of its Blu-ray player — which will cost about $1,500 — until September. Studios have released only a handful of movies thus far because so few players have been sold. Another complication is that consumers with older high-definition television sets may not get the best possible picture if studios activate certain copy protection software embedded on their DVD’s.” — from Ken Belson’s story about the state of the DVD business. What a complete joke! Why would anyone except for profligate money-to-burn rich guys buy a HDTV player of any brand? The thing to do is obviously wait until all the DVD distribs are making high-def discs for just one player. The hell with it.

The story is not that Jim Carrey and manager Eric Gold are on the negotiating ropes — the story is that sanity is creeping into the judgment of big-studio execs who determine whether to green-light big-budget films. I’ve long felt that the system of paying $20 to $25 million fees and/or massive gross point percentages to big stars who can presumably “open” a film is a bad thing for the business as a whole. (Especially considering that a big name appearing in a shitty no-interest film never seems to make a financial difference.) Big talent should be decently compensated, but the really big money shouldn’t kick in until the film is a hit. (And if it’s not, too bad.) Everyone should share in the risk. In any case, it’s very, very encouraging that big studios are taking a second look at rich deals and developing a “cold feet syndrome,” as Slate‘s Kim Masters reports. “Paramount is pushing back Believe It or Not, a mega-budget project that was to be directed by Tim Burton and star Jim Carrey. The studio has instead switched Burton to a film version of Sweeney Todd, a far less expensive project belonging to DreamWorks (which is now owned by Paramount). This leaves Carrey in the awkward position of having had two major films vanish in the space of a few weeks. Before Believe It or Not, Carrey was supposed to be making Used Guys for Fox. That comedy, directed by Jay Roach (Meet the Parents), was also to star Ben Stiller. With millions of dollars spent in preparation, Fox pulled the plug recently as the budget climbed to $112 million.” Given the economics of the business these days”, Masters concludes that “cold feet” is “a syndrome that may occur with increasing frequency.” Could the Paramount and Fox turndowns be analagous to the first stirrings of anti-socialist fervor in Eastern Europe in 1989?

Alan Bennett and Nicholas Hytner‘s The History Boys having won six Tony Awards last Sunday night, including one for Best Play, seems to suggest that Hytner’s film version, which Fox Searchlight will bring out in the fall, has instant credibility as a year-end Oscar contender. I don’t think that’s necessarily true. And I’m saying this, frankly, because of the older- man’s-hands-on-schoolboy-genitals factor. (Sorry, but I didn’t write the play.) I was lucky enough to see The History Boys in early May before going to Cannes Film Festival, and there’s no question that it’s a brilliant and impassioned tribute to the glories of inspired teaching, of passing along those things that truly matter in life. In the film, Richard Griffiths (best known as Harry Potter‘s mean-spirited Uncle Vernon) will repeat his Tony-winning stage performance as an eccentric history instructor in an English boys’ school who’s expected to prepare them as best he can for university entrance exams, but is forced to leave his post when the school’s headmaster learns about his erotic fondling of some of the students. There’s a longstanding homoerotic tradition in dramas about English schoolboys and boarding schools (reflections of this were in Lindsay Anderson‘s If) and it’s certainly no big deal to X-factor types, but I’m asking myself a question. If a Catholic priest takes liberties with a choirboy, it’s venal and deplorable. But if a history instructor fondles the balls of a young student while they ride on a motorcycle, it’s not that big a deal. I’m not trying to be a smartass, but the idea seems to be if you’re broadening the student’s mind with profound teachings (as Griffith’s History character certainly is), copping a discreet feel is a forgivable impulse/indulgence, but it’s a different story if you’re a priest passing along repressive Catholic dogma.

The perpetuating of the Superman-as-gay-icon thing is bizarre. After seeing Bryan Singer‘s film last week I wrote that those speculating about echoes along these lines are “dreaming…this is a film about purity of spirit.” And Singer has said his Superman “is probably the most heterosexual character in any movie I’ve ever made”…and he’s not wrong. But the Guardian won’t let it go.