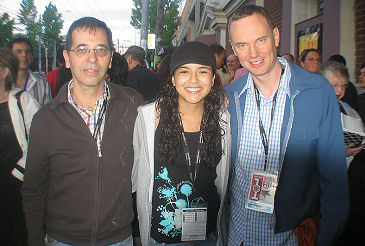 (a) At a Capitol Hill club called Chapel, Cinematical‘s Kim Voynar, Americanese director-writer Eric Byler, Byler’s Taiwanese ally-partner(I’m bad with names…sorry) who worked on the film, and Americanese star Allison Sie — Friday, 6.16.06, 11:40 pm; (b) Americanese star Allison Sie, director-writer Eric Byler — Friday, 6.16, 6:20 pm; (c) Seattle skies are still blue and on the bright side at 9:40 pm, obviously due to the northern lattitude; (d) this photo of an obviously pleased holder of a Brookline High School graduation diploma has zip to do with movies, but it represents the culmination of a twelve-year effort and bestowing a moment’s attention doesn’t seem out of line.

I’ve explained this a couple of times in years past, but let’s go over it again: it’s a total recipe for disaster to call any film [Fill in the blank]’s War. There have been films with titles like this before (The Private War of Major Benson, Murphy’s War, etc.), and any such title always seems to imply that the main character will be manipulative, obsessive and egoistic…and who wants to spend two hours with an asshole?. The latest is Charlie Wilson’s War , which will costar Tom Hanks, Julia Roberts and Phillip Seymour Hoffman. Mike Nichols will direct starting in October from an Aaron Sorkin script (a copy has been sitting unread on my desktop in a PDF file for over a year). Based on a book by George Crile, it’s about a renegade congressman/CIA agent who secretly funnelled arms to Afghhanistan freedom fighters in the early ’80s in their fight against Soviet troops. Just change the title…simple. 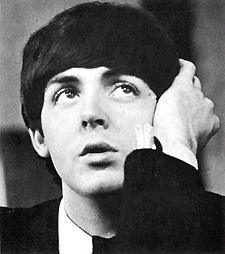 A friend who enjoys a degree of familiarity with the Zodiac team tells me that the recently-revealed January ’07 release date “seems to be the wide release date” and that the current talk is about doing “a late fall campaign for the Oscars. The January release date was determined before anybody at the studios even saw the film.” (To which I would ask, determined by whom? And why?) “I have the feeling that this film will play major for the Oscars,” the friend continues. “It runs just under three hours, is very ’70s-style and way out of Fincher world… nothing like Seven and a real ‘journalism film.'” If this plan turns out to be actual, wouldn’t you think that the Paramount p.r. folks would have shared this once the news got out earlier this week that Zodiac has (apparently) been bumped out of ’06?

Once again, the tracking guys have underestimated: two of the three services predicted a Nacho Libre take somewhere in the low to mid 20s, and a third estimated earnings in the high teens. And yet Friday’s $10.9 million figure indicates a weekend haul around $28 or $29 million….right?

“What if your flash drive [i.e., USB drive] also stored your programs, your settings — your entire computing universe? That’s the idea behind the Lexar PowerToGo software, which is itself a licensed version of something called Ceedo Personal. It’s designed to turn a flash drive into a portable Windows XP ecosystem, meaning that you can jack into anybody’s PC anywhere and find yourself — and your software tools — right at home.” — from David Pogue‘s 6.15 N.Y. Times column. It’s only 11:02 am and I know for sure this is the most exciting news of the day.

Former N.Y. Times fashion columnist Ginia Bellafante , whose writing is delicious and razor-sharp, has given what sounds like a profound stamp of approval to David Frankel‘s The Devil Wears Prada (20th Century Fox, 6.30): 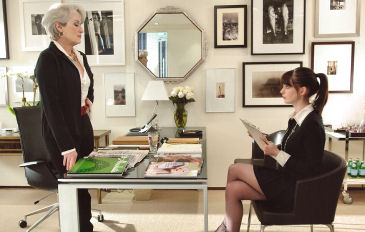 “The fashion beat affords…plenty of time spent in the company of fashion people, something variously dreadful and exhilarating,” Bellafante says early on. “Disciples of the fashion tribe will surely say The Devil Wears Prada exaggerates their manners and proclivities. It doesn’t. The movie is easily the truest portrayal of fashion culture since Unzipped, the 1995 documentary about Isaac Mizrahi.” Having seen it myself, I should add that it barely panders to the alleged longing for formulaic simplicity among its largely female audience. It portrays the fashion world in fairly detailed and unsentimental, grown-up terms. You could argue that when all is said and done the film doesn’t seem to have built up a huge head of emotional steam, but I respect the restraint and the exactitude that went into it. I went right along with Anne Hathaway‘s Andy (whose initial naivete didn’t bother me in the slightest). Stanley Tucci‘s Nigel, a seasoned fixer-facilitator, is dead-on (he should have been given more lines and screen time). And Meryl Streep is chilly perfection as Miranda Priestley, the Anna Wintour-like editor of the fictional fashion mag Runway. Streep seems to have based her performance in part upon Al Pacino’s Michael Corleone in The Godfather, Part II. She barely speaks above a murmur throughout the whole film, the idea being that the truly powerful never need to raise their voice.