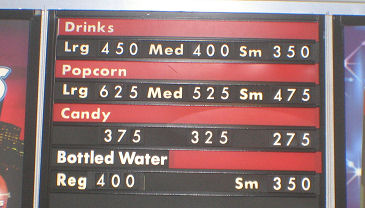 Nothing arouses feelings of hostility in otherwise decent, law-abiding citizens like price-gouging. You should see the size of the bag of popcorn that the Westwood’s Festival theatre is charging $4.75 for. Hey, guys….why not make it an even $5 bucks? Go for it.
July 1, 2006 4:03 pmby Jeffrey Wells
1 Comment
Avalon Blue 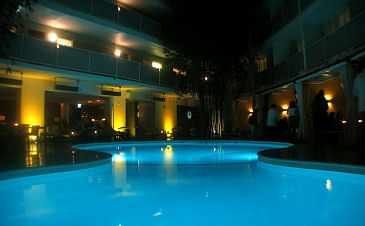 Joel Cohen, vp business development for MovieTickets.com, has told Reuters that “we are really off the charts” in comparing Pirates 2 box-office prospects to what the first Pirates made. The story says that “advance ticket sales are already more than 20 times higher” than that of the original. Exhibitor Relations guy Paul Dergarabedian, whose observations have caused my eyelids to droop more than any other spoksperson in any other field, says that “the buzz around the campfire in Hollywood is, ‘Could this be the film to post the biggest opening weekend of all time?” (The phrase is “word around the campfire ,” not “buzz”). The Big Kahuna record holder is Sony Pictures’ Spider-Man, which opened with $114.8 million in ’02. Of course, the Reuters story ignores all considerations about what this sight-unseen enthusiasm for Pirates 2 means in terms of our fast-food culture and the aesthetic sophistication levels that seem to exist among the young. Money, popcorn, abundance…what else matters?

Having made a relatively decent $31 million and change from Paul Greengrass‘s United 93 (i.e., “decent” considering all those thousands of people who said they wouldn’t see it), Universal is donating an extra $250,000 to the United 93 memorial near Shanksville, Pennsylvania.

Jeff Garlin’s I Want Someone to Eat Cheese With, which I caught Friday night at Westwood’s Crest Majestic, is the most entertaining and engaging audience- friendly film I’ve seen at the L.A. Film Festival over the past eight days. And it definitely has the makings of a theatrical hit if it’s shaped up and sold right.
It’s a small-scaled, funky-looking thing in a handheld 16mm vein (it could have been shot in the ’70s or ’80s…there’s nothing here-and-now digital in its technique or emotional approach), but it’s warm and engaging and pretty damn funny. 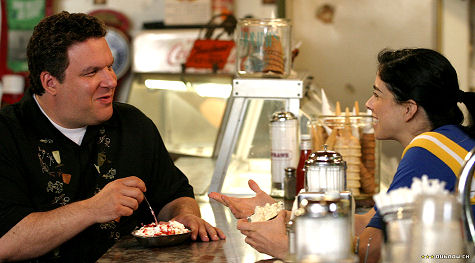 Star, director and writer Jeff Garlin (l.) and Sarah Silverman in I Want Someone to Eat Cheese With

Director-producer-writer Garlin — best known for his ongoing role as Larry David’s manager in HBO’s Curb Your Enthusiasm — and his fellow performers (Bonnie Hunt, Sarah Silverman and a team of Chicago-based actor pals) are all top-notch. And in an unassuming little-movie way with the emphasis on spirit and tone and quirky-hip humor, Cheese works.
I could feel the satisfaction levels in the house right away. The audience was totally grooving on it until the very last scene, but this is a fixable problem. The Weinstein Co. is in the process of acquiring, and if I know Harvey he’ll be pressing Garlin to re-cut or re-shoot the ending, which isn’t “bad” as much as vague.
< ?php include ('/home/hollyw9/public_html/wired'); ?>
If the finale is re-tooled in the right way, Cheese could catch on and then some. The word will get out that it’s kind of a Big Fat Greek Wedding for witty fat guys, only without the wedding or the slobbery cattle-yard relatives.
Garlin said last night he’s totally at peace with the ending and his heels are dug in, so maybe the film will go out as is. But even if it does critics and auds will still speak highly of it and it’ll do some decent business. 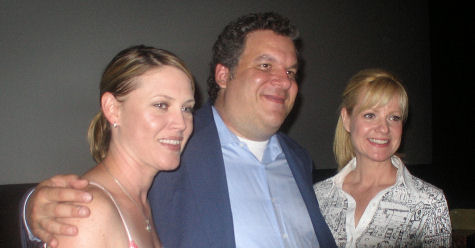 Cheese producer whose name I didn’t write down, Garlin and costar Bonnie Hunt during q & a at Crest Majestic theatre — Friday, 6.30, 8:50 pm.

Cheese is a sharply written (here and there genius-level) comedy-drama about a witty, likably humble Chicago comedian named James (Garlin) who lives with his mom but badly wants a soulmate girlfriend. Vaguely fortyish, James is saddled with a yen for slurping down junk food late at night (which costs him in the roman- tic department), and he’s pretty good at getting shot down or turned down or fired.
But as gloomy as James sometimes gets (and for good reason), he’s tenacious in a shuffling, good-natured, comme ci comme ca way, and you can’t help but feel for the guy and want him to succeed.
Garlin’s model, obviously, is Paddy Chayefsky’s Marty, which his film is a kind of tribute to. The Oscar-winning celluloid version of Chayefsky’s play, directed by Del- bert Mann and released in 1955, is brought up several times, and Garlin uses a theatrical staging of the play in Chicago as a plot point.
Cheese isn’t as sad or tear-jerky as Marty, and of course, being a Garlin thing, is coming from a wittier, schtickier place. Marty was about heartfelt pathos and the loneliness of a homely Brooklyn butcher (Ernest Borgnine). Garlin’s world view (and his film’s) is that of an always-candid, whipsmart, vaguely self-loathing Jewish comic…big difference. 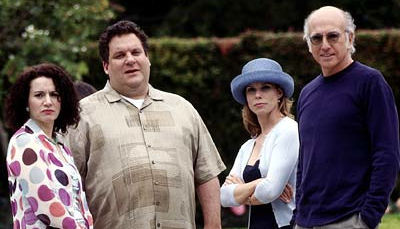 Hunt has what should be the lead female role — a neurotic elementary school teacher who’s a secret chubby-chaser, and who right away seems like James’ best romantic bet. But Hunt doesn’t make as big an impression as the always-brilliant Silverman does in a secondary role, that of an impulsive wackjob whom James has a fling with.
And that’s a problem. An extra scene or two with Hunt (a brilliant comedian who’s quite good in the scenes that she has) needs to be added toward the end, some- thing involving an emotional catharsis or confessional of some kind. Garlin knows what I mean — a James L. Brooks scene.
David Pasquesi is also underdeployed as Luca, James’ aloof and very logical- minded pal. Mina Kolb is quite good as James’ overbearing mom. Amy Sedaris has an amusing cameo as a therapist. A bunch of other Chicago actors whose faces I vaguely recognized (or so I told myself) are also very fine.
Garlin originally performed the material in a one-man show under the same title. He said during the q & a last night that Silverman’s character is based on a woman he once had a thing with, and who half-tortured him to death. Obviously his Second City improv skills (and also Hunt’s — they knew each other as nascent Chicago comedians) are the basis of the film’s tone and attitude, and good for that. 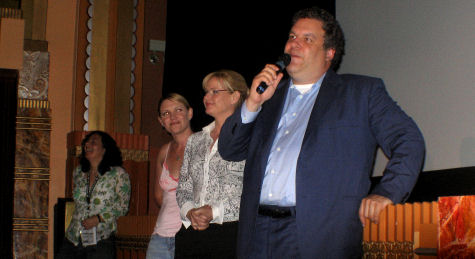 I hope the Weinstein Co. pushes I Want Someone to Eat Cheese With in the way it deserves, and that it connects with the public in some kind of vigorous way. And let’s hope Garlin keeps writing and acting and directing because he’s one very sharp dude.
I Want Someone to Eat Cheese With played at the Tribeca Film Festival two months ago, and here’s Garlin’s “director’s statement” that appeared in that festival’s online catelogue.
And here’s a N.Y. Times Magazine profile of Garlin by Alex Witchel that ran a few days ago.
Garlin’s previous credits include a supporting role in Daddy Day Care (which I will never see if I can help it), Full Frontal , Bounce and Austin Powers: The Spy Who Shagged Me. He serves as an exec producer on Curb Your Enthusiasm and has shot a pilot that no one will ever see unless he puts it up on YouTube.

I’m assuming that Nicholas Hytner‘s film version of Alan Bennett‘s The History Boys (Fox Searchlight, 11.24), which has the spiritual and thematic ingredients required for Best Picture consideration in spades, will play the Toronto Film Festival.

I still think there’s a speed bump waiting to happen in the subplot about the older teacher fondling some of his students, but the stage version, which won won a passel of Tony awards (including one for Best Play), is so rich and resounding, and it says so many right things in such a commanding way, that it’s hard to imagine the film not being received with great end-of-the-year, award-level acclaim. Unless, of course, Hytner somehow cocks it up. 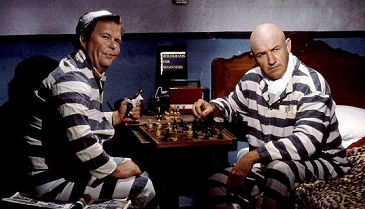 The Devil Wears Prada did better that expected last night — $9.1 million with a projected $27.8 million by Sunday night. Earlier this week it was being projected to pull in a weekend figure in the low 20s, but tracking began to really accelerate over the last few days, especially (obviously) among women, and not just 20-somethings. Adam Sandler’s Click, a film for the ages, was off 57% from last Friday for a $6,173,000 haul — a 47% dip is being projected for the weekend. Cars did $4 million and Nacho Libre earned $1,741,000.

Superman Returns did $16,727,000 yesterday (Friday, 6.30) — another indication of good but not great business. If this film had serious across-the-board heat yesterday’s tally would have been higher than Wednesday’s (6.28) haul of $18.3 million, which is what Warner Bros. claimed. (The $3 million earned from Tuesday’s late-night shows made a total of $21.3 million.) On a long holiday weekend, it’s axiomatic that Friday-night business on a film that’s really working will overtake the mid-week opening-day total…and this didn’t happen. The three-day weekend projection (factoring in a strong Sunday) is $50.1 million, which will take it to an $82 million total, leaving Monday and Tuesday business to bring in the final $20 million or so (perhaps $25) for a seven-day total of just over $100 million. Next weekend’s business (i.e., up against Pirates 2) will be in the low to mid 20s.