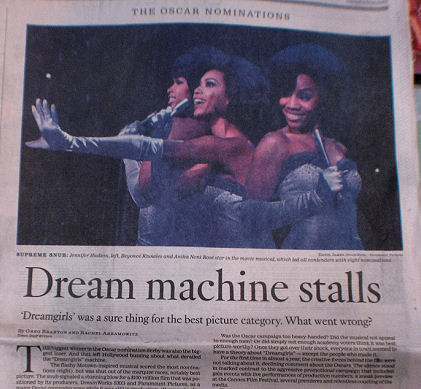 Yesterday’s L.A. Times autopsy piece on the failure of Dreamgirls includes a series of quotes from prognosticators who said Dreamgirls was a lock to either win the Best Picture Oscar, or at least to be nominated for same.
January 24, 2007 4:27 pmby Jeffrey Wells
2 Comments
It’s Over

Park City is dead, the festival is dead…it’s over, emptied, drained. Figuratively speaking, of course. I’m outta here tomor- row and totally fine with that. I’ve been calling Paramount Vantage publicists to get tickets to the Black Snake Moan screening at 6 pm this evening, and they’re not calling me back. I’m half inclined to shine it, but L.A. Weekly critic Scott Foundas is sitting next to me and sayng I have to give it a try, “it’s your job,” etc. I’m seeing Once a second time this evening at 8:30 pm, and that’s all she wrote.

I too sat through yesterday afternoon’s press screening of Hounddog, and I agree with everyone else that it’s nothing. Nothing to see, nothing to release, nothing to rent, nothing to get shocked or stirred about…just another neo-Faulknerian Southern gothic wallow with a tasteful, non-inflammatory Dakota Fanning rape scene. I’ll say this: Fanning is a very skilled, super-readable scene inhabitor. That may have been obvious to others previously, but this is the first film she’s had to “carry” as the star. Here’s an excellent rip-job review by Screengrab’s Mike D’Angelo, and another negative review by N.Y. Post critic Lou Lumenick.

I’m starting to agree — Sundance ’07 is definitely one of the worst in memory. I’ve seen about 16 or 17 films so far, and genuinely liked/admired five — Once, Grace is Gone, Interview, The Savages and Broken English. I missed yesterday afternoon’s press screening of Son of Rambow (described in Variety as “Billy Elliott directed by Tim Burton”) but now that it’s been picked up for $8 million by Paramount Vantage it’ll obviously be viewable down the road. I haven’t written about any of the crappos and mezzo-mezzos — I’m trying to stick to the ones I’ve given a B-plus grade or better, Most Sundance festivals give up about five or six serious stand-outs. The difference this year is that there haven’t been any double grade-As or even solid As, a la Little Miss Sunshine — the ’07 goodies have all been in the B-plus to A-minus range.

How did Harvey Weinstein land that distribution deal for Grace is Gone last weekend? A producer at Monday’s Picturehouse party told me that Harvey was so determined to lock things down, he drove over to the condo of the Grace producers at 4 ayem and knocked on the door — bam! bam! bam! I don’t know precisely which Grace producers were in the condo (it could have been John Cusack, Grace Loh, Daniela Taplin Lundberg, Ed Hart and/or Paul Bernstein), but the Weinstein home invasion sent them into a five-alarm mode.
Like terrified rabbits, they all scurried into a bathroom and locked the door to hud- dle alone before talking terms with Harvey. Can you imagine? “He’s here…he’s in the house! What do we do? We have to be on the same negotiating page! Quick…the bathroom! John…! Ed! Everyone in! Lock the door!” Before the sun rose (or maybe a little bit after — I’m not sure), Harvey had acquired distribution rights for $4 million.
This episode reminded me of a term thought up by Paul Theroux in “The Mos- quito Coast” to describe a quality that Allie Fox had — “four o’clock in the morning courage.” In Harvey’s case, it’s four o’clock in the morning bulldog tenacity….same difference.

John Stockwell‘s Turistas (Fox Atomic), which shot in mid ’05 for a cost of $10 million, has earned $7,015,358 so far, according to the IMDB, after seven weeks of play. Understandably, Lionsgate UK has retitled it Paradise Lost for its U.K. and Ireland opening on 4.13.07. What’s happened to Stockwell? He was a GenX Curtis Hanson after making crazybeautiful and Blue Crush, a first-rate, emotionally honest surfing movie, but he’s allowed himself to slide into a pseudo-Lionsgate horror B-movie groove, making flicks about half-dressed kids dodging bad guys and killers in sunny climes (Into the Blue, Turistas). I don’t know the backstory, but it seems as if 2002’s Blue Crush was a kind of yin-yang turning point for the guy. It was his biggest financial success ever (it did around $40 million domestic and decently overseas), but poor Stockwell has been in a kind of Blue Crush jail ever since.

“I’ve been in this business a long time, and Adrienne Shelly‘s Waitress could have come to the festival, gotten a standing ovation and remained unsold. And to sell to Searchlight! She hit the jackpot! I tried to explain how great this was to her mother, Elaine, but even while I was talking we both started crying. But [producer] Michael Roiff and I are sure that Adrienne can still hear the laughter somehow and is happy. 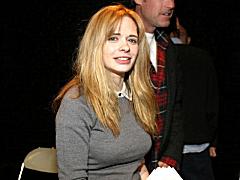 “As someone said at her memorial service, Adrienne’s life may have been cut short, but she sure left her mark.” — from Reid Rosefelt‘s tribute to the late actress-director, on zoomin.com.

“I think it’s wonderful. I think it is not only an outstanding film, but it has created a genuine cultural shift in how people think about what I believe to be one of the most important issues of our times.” — Sen. Barack Obama commenting on An Inconvenient Truth being nominated for the Best Feature Documentary Oscar.

“What basis is there for everyone seeing Dreamgirls as the biggest Best Picture snub? Dreamgirls never won a critics award, nor was it the top film on all that many, if any, top 10 lists. The only reason to consider it a snub is because its assumed front-runner status was banged into our heads all year long. The real snub, in my mind, went to United 93 and Children of Men.” — A reader named “kbowen.” (Wells to kbowen: Agreed.)