With both Need (a somewhat “bent” relationship drama with Nicole Kidman and Naomi Watts) and Dirty Tricks (a women-of- Watergate movie with Meryl Streep as Martha Mitchell and Gwynneth Paltrow as Maureen Dean) in pre-production, it could never be said that director Ryan Murphy (Running With Scissors) is one to let grass grow under his feet.

But who would’ve imagined Murphy directing something as unusual and film-buffy as Alfred Hitchcock Presents, a drama about the making of Hitchcock’s Psycho, and particularly the hurdles and roadblocks that the great British director (possibly to be played by Anthony Hopkins) went through in order to bring it come to fruition. Hitchcock was discouraged left and right from making it. The script was seen as way too dark and perverse (especially with the lead female star getting killed off after 45 minutes), and no one wanted to see a movie based more or less on the macabre exploits of serial killer Ed Gein.

Question is, will Murphy’s film circumvent whatever it was that underwhelmed viewers of RKO 281, a TNT drama about the making of Citizen Kane?

I don’t know exactly when Alfred Hitchcock Presents might shoot, but I was told earlier this evening it’s definitely real. Universal, Hitchcock’s home studio for the last 15 or so years of his life, may be involved as a financier-distributor. (Of course, nothing is “likely” until it actually happens so take this with a grain.)

If and when it happens, the plan is for Helen Mirren to play Alma Reville, Hitch- cock’s wife and lifelong creative collaborator. Psycho was shot for Paramount, although Universal founder and Hitchcock confidante Lew Wasserman occupies a portion of the script. Psycho costars Anthony Perkins and Janet Leigh are also “characters,” I’m told, but not large ones. Presumably screenwriter Joseph Stefano will also figure in.

Alright now, settle down: all Patrick Goldstein meant by digging into “Oscar bloggers” at the end of his “Winners & Losers: Big Picture Extra” column and saying that “after the millions of words they wrote pontificating about the Oscars they could’ve come up with a better pick for best picture winner than Dreamgirls” …we all know what he meant.

He was, yes, tut-tutting all those prognosticators who’d been asserting for months and months that Dreamgirls was a guaranteed Best Picture nominee (a group that includes yours truly, Tom O’Neil, Sasha Stone, Pete Hammond and Goldstein himself) and, according to some, an almost-certain winner. But of course, Gold- stein was really flipping off David “the Bloviator” Poland, a.k.a., the Caspar Gutman of Dreamgirls blog-boosters who still maintains that Bill Condon’s film would have won the big prize had it been nominated.

“Hillary loyalists have hissed at defecting donors to remember the good old days of jumping on the Lincoln Bedroom bed. ‘Hillary is livid that [Barack] Obama‘s getting the first big fund-raiser here,’ one friend said.

Dowd spoke to Geffen for her column, and the quotes are fantastic.

“I don’t think anybody believes that in the last six years, all of a sudden Bill Clinton has become a different person,” Geffen tells her, “adding that if Republicans are digging up dirt, they’ll wait until Hillary’s the nominee to use it. ‘I think they believe she’s the easiest to defeat,’ he says.

Hilary “is overproduced and overscripted. ‘It’s not a very big thing to say, `I made a mistake’ on the war, and typical of Hillary Clinton that she can’t,’ . Geffen says. ‘She’s so advised by so many smart advisers who are covering every base. I think that America was better served when the candidates were chosen in smoke-filled rooms.”

The babble here is not about Babel; it’s about the battle of the billionaires. Not only have Ron Burkle and David Geffen been vying to buy the Los Angeles Times — they have been vying to raise money for competing candidates. Burkle, a supermarket magnate, is close to the Clintons, and is helping Hillary parry Barry Obama by arranging a fund-raiser for her in March, with a contribution from Steven Spielberg.

“Did Spielberg get in trouble with the Clintons for helping Senator Obama? “Yes,” Mr. Geffen replies, slyly. Can Obambi stand up to Clinton Inc.? “I hope so,” he says, “because that machine is going to be very unpleasant and unattrac- tive and effective.”

“Obama is inspirational, and he’s not from the Bush royal family or the Clinton royal family. Americans are dying every day in Iraq. And I’m tired of hearing James Carville on television.”

Mark Ruffalo portrays real-life San Francisco detective Dave Toschi in Zodiac (Paramount, 3.2), and obviously bears a certain resemblance to the real guy in his prime. But one thing an actor playing a cop in a big-studio movie can never have is a little funny-looking pot belly, like the real Toschi had. 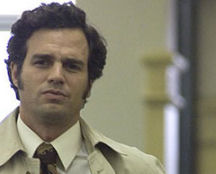 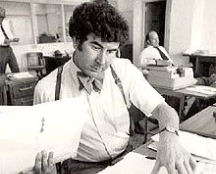 Zodiac director David Fincher was a major hard-core accuracy freak in 10,000 different ways when he planned and shot this awesome film, but no director would dare suggest that a “name” actor wear a prosthetic pot gut, and no actor would stand for it.

Film Jerk‘s Edward Havens is running his annual Oscar Handicap articles, which look at voting patterns at most of the Academy Awards categories. Here‘s the piece about the Best Picture race; links to the additional articles can be found at the end.

Big scoop: the Governors Ball, Vanity Fair and Elton John’s annual AIDS Foundation bash are the only hot-shit parties going on this Sunday night. On top of which, according to The Envelope‘s Elizabeth Snead, no Oscar post-parties are being planned by Paramount, New Line, Fox/Searchlight, Universal/Focus, Disney/Buena Vista or Picturehouse. Oh, yeah? I’ve been told about a certain distrib-hosted party. Not that big a deal but it’s said to be happening.

Wanna make book on the Oscars and maybe score some dough? Israeli film blogger Yair Raveh, master of a Hebrew-language site called Cinemascope, has a global bilingual Oscar pool up and running, for those who like to place bets from wherever. Raveh claims he’s the only Oscar forecaster who’s willing to put up cash on (no lie) betting Martin Scorsese is going to lose the directing award on Sunday.

Yoko Ono may (I say “may”) have succeeded in “yanking” a 90-minute John Lennon documentary called John Lennon: Working-Class Hero, despite the producers having landed numerous TV and DVD deals going back to late ’05. 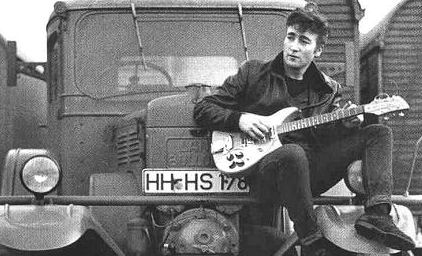 Narrated by Gary Oldman, the doc is said to include “never-before-seen home movies” provided by Ono, plus a reported interview with Lennon’s first wife Cynthia, who “allegedly complains on-camera that drugs and Ono were responsible for the break-up of their marriage,” according to the notoriously sloppy British news service WENN, which never provides news links.

The report says Ono also was interviewed for the feature, providing what the producers described as “her most revealing interview to date.” It says that “an unnamed source” has told the London Sun, “The film had been several months in the making but at the last minute Yoko withdrew support.” Doc was produced by Double Jab Productions, which declined to comment on the Sun‘s report and shut down its website. (This part is definitely true — the site isn’t up and running as we speak.)

If the WENN report is true (I’ve called a couple of guys who ought to know but didn’t pick up), it would seem to be in keeping with Ono’s behavior regarding previous John Lennon docs and tributes, which is to make sure her late husband is portrayed only in glowing, bordering-on-angelic terms.

As I wrote in my review of John Scheinfeld and David Leaf”s heavly Ono-cized The U.S. vs. John Lennon….

“The Lennon portrayed in this film is indeed scrubbed clean and phony as a three-dollar bill, and there’s no doubt in my mind that Leaf decided on this portrait — Lennon as a kind-of St. Francis of the anti-war movement, a guy who did nothing but good things and spoke only of love and peace and stopping the killing — under the influence of his and Scheinfeld’s alliance with Lennon’s widow. 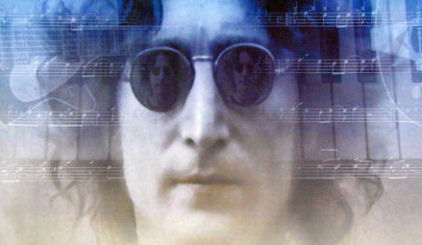 “I call it the ‘Curse of Ono‘ — the more control she seems to have over any portrait of the late ex-Beatle, the more sugar-coated it turns out.

“Like anyone else, Lennon was a mixed bag — part genius, part beautiful guy, part angry guy, part saint, part asshole, part man-of-courage, part prima donna, part gifted troubadour, part abusive drunk (during his 1974 “lost weekend” phase), part mystical seeker. But you only get the positive stuff from Leaf-Scheinfeld-Ono. And after an hour or so of the vigilant, heroic, positive-minded Lennon, you want to barf.”

Here’s the “wake up and smell the coffin”/Rome…lotsa wops, no pizza” deleted scene from The Departed. Performed by Jack Nicholson in a hat and inky beard dye, an older guy (too old) playing Leonardo DiCaprio‘s father, and some kid playing young Leo.

Peter O’Toole‘s recent visit with Charlie Rose is viewable on the site. It takes too long to sift through all the corporate sponsor promos, but eventually it comes up.

To hear it from The Reeler‘s Stu VanAirsdale, the highlight of the Robert Altman tribute was Julianne Moore‘s recollection about beiong cast in Short Cuts, and being told that the role required lower-level nudity and Moore telling Altman that “I really was a redhead.”

I prefer the Paul Thomas Anderson anecdote passed along in David Carr’s N.Y. Times story, to wit: “On the set of A Prairie Home Companion, Altman would listen carefully to the suggestions of others and then say, ‘Let’s not do that.'”

An Inconvenient Truth is going to win the Best Feature Documentary Oscar this Sunday, and the right thing, obviously, would be for not just director Davis Guggenheim walking up to the podium to accept, but also (hello?) Al Gore along with producers Lawrence Bender, Laurie David and Scott Burns. Obviously. But no. Just Guggenheim. But of course.