Support on Patreon Follow @wellshwood
13 Comments
Into The Wild

There was some talk a while back about Sean Penn‘s Into The Wild (Paramount Vantage, 9.21.07), an adaptation of Jon Krakauer‘s book about a young guy who tried to live like Jeremiah Johnson in the Alaskan wilderness but was found dead inside a bus four months later, possibly turning up at the Cannes Film Festival. 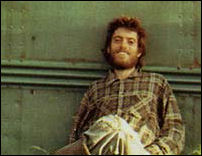 That may have been a slight possibility (Wild wrapped four months ago) and it may never have been one at all, but at least one solid reason why Penn’s film won’t be in France next month is that it’s about to do some extra shooting here in Los Angeles. Emile Hirsch (Alpha Dog, The Girl Next Door) is playing the wilderness guy, Christopher McCandless, with Vince Vaughan, Kristen Stewart and Jena Malone costarring.

Hirsch’s parents, Walt and Billie McCandless, are being played by William Hurt and Marcia Gay Harden, and last week’s announcement from casting director Rich King said they’re looking for actors who resemble Hurt and Harden as they might have looked in their early 20s. Shooting is supposedly happening on Saturday, 4.28.

“WE ARE SEEKING A YOUNG CAUCASIAN MALE(20-24YRS) who looks like William Hurt,” the sheet said. “This is for a flashback scene so we need a college-aged guy who looks like William did in his early 20’s. He is approx 6’0 tall and slender with sandy blonde hair. He also needs to have a mustache (or can grow one quickly) and be willing to possibly remove it if asked.

“WE ARE [ALSO] SEEKING A YOUNG FEMALE (20-24YRS) WHO looks like Marcia Gay Harden. This is also for a flashback scene so we need a college-aged girl who looks like Marcia did in her early 20’s. She is 5’5 and wears a dress size 4-6 with shoulder length dark brown hair.”

Alaska — the place where young American malcontents (McCandless, Timothy Treadwell) go to commune with nature and inevitably die due to having under- estimated the potential dangers.

The American Pavilion — the big white schmooze tent on the beach at the Cannes Film Festival — has been re-christened as AmPav to discourage notions that it’s only for Yanks. “More than 40% of our membership is made up of journalists and industry professionals from countries other than the U.S.,” founder Julie Sisk has proclaimed. And something else has changed. Last year it cost $25 bucks to buy an advance entry into this well-run establishment — this year it’s been doubled to $50 in advance and $100 on-site. It’s still worth it but whoa. 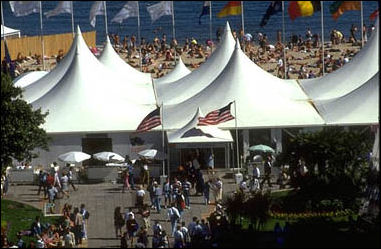 Do any Manhattan-based HE readers believe that the High Line Festival, a “ten-day mash-up of music, film, comedy, visual art and performance” that will unfold on the lower west side from May 9th through the 19th, is stealing some of the heat from the Tribeca Film Festival, which is happening now through May 6th? One’s a movie festival, the other’s mainly about music. Robert DeNiro is the big Tribeca honcho, and David Bowie is “curating” the High Line. If I were working Tribeca day and night for twelve days I’d probably feel a little festival-ed out by the time the High Line came along. And they’re probably after some of the same corporate sponsors.

Good god, this original Star Wars trailer was really awful. It must have been cut by some old-school guys on the 20th Century Fox marketing team. It couldn’t have been cut by Marcia Lucas or anyone on the feature-version crew…could it have?

Here’s a slightly better one for The Empire Strikes Back that sounds (could it be?) like it was narrated by Harrison Ford. 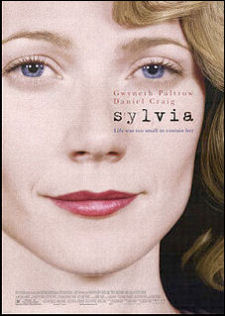 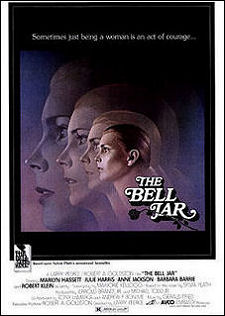 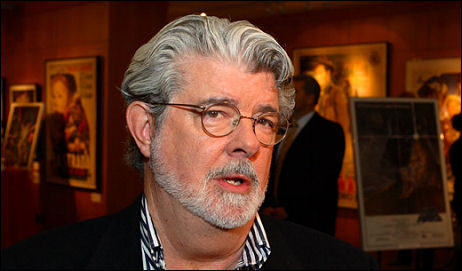 Sam Raimi’s two political donations to George Bush in ’04 only amounted to $900, according to Newsmeat.com. The Spider-Man helmer gave $300 to the Bush campaign on 1.14.04, and then another $600 on 7.8.04. Raimi also gave $450 to Senator Arlen Specter, apparently to support his campaign for the ’96 Republican Presidential nomination.

And yet Raimi isn’t a total Republican — he also gave $1000 to Barbara Boxer‘s U.S. Senate campaign in ’02. He also donated $1200 to the Political Action Committee of the Directors Guild of America in ’05.

I like conservatives personally — they talk in a plainer, more straight-from-the- shoulder way than a lot of liberals I know — and I certainly understand the plight of filmmakers who support Republican or conservative causes. I got into this when I wrote a big piece for Los Angeles magazine in early ’95 called “Right Face,” about how it was easier in the liberal Hollywood culture of the mid ’90s to say you’re gay than confess to being a rightie, which could put you on what Lionel Chetwynd called a “white list.”

I’m not trying to slam or pigeonhole Raimi for having conservative values, but my God…he supported Bush in ’04? He either believed or rationalized the WMD bullshit about why we went into Iraq, supported Bush’s anti-conservationist leanings and all the dozens of other bone-headed policies? Raimi’s $900 Dubya donation is offensive to me. It really is. We live in a free society and by all means let’s keep electing right-wing assholes and hasten the global-warming process as much as possible, but Spider-Man 3 ticket-buyers should know, I feel, where a small portion of their ticket money is likely to end up. Pointing this out is fair, surely.

The Cannes Film Festival’s Directors’ Fortnight slate is supposed to be announced on May 3rd, but Variety‘s Alison James is reporting now that the sidebar’s opening-night pic will be Anton Corbin‘s Control, a biopic about the late Ian Curtis, the Joy Division singer who hanged himself at age 23. Bono, members of New Order and Depeche Mode will attend (and may perform at) the opening- night party on Friday, 5.17, following a gala screening of the black-and-white film. 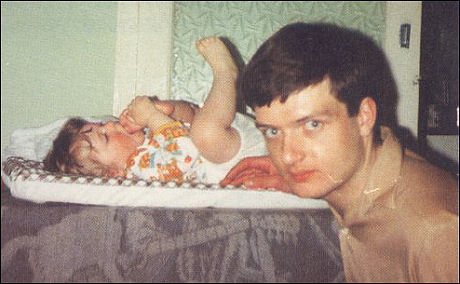 The Becker International production is based on “Touching From a Distance,” a reminiscence by the singer’s widow Deborah Curtis (played by Samantha Morton in the film). The book describes Curtis’s life from his early teen years to his early death, and tells how –with a wife, child and impending international fame — he was seduced by the glory of an early grave. What were the reasons for his fascination with death? Were his dark, brooding lyrics an artistic exorcism?

The Variety story passes along an opinion that a “love triangle” between Curtis, his widow and his mistress may have been a factor.

The Curtis suicide was dramatized in Michael Winterbottom‘s 24 Hour Party People, the well-received faux-doc. Control , however, is said to be a “totally different” film. Directors Fortnight honcho Olivier Pere told James that “it’s a surprising love story about someone who was very ordinary and very modest…it’s very close to English cinema from the 60s and 70s, with a political and social backdrop.”

Robinson Devor‘s Zoo (ThinkFilm, 4.25) deserves a certain respect, although many viewers will find themselves contending with suppressed laughter and/or disgust. Even its detractors will admit it’s a curiously haunting, beautifully photographed thing. (And exquisitely cut and scored.) I acknowledged this in a piece that I ran on 4.3.07 . I also said “there’s something profoundly troubling about a talented filmmaker giving his earnest and thoughtful attention to a ridiculously perverse (the term I’m most comfortable with is ‘diseased’) sexual practice.”

One of the funniest passages I’ve read about this film is contained in Manohla Dargis‘s 4.25 N.Y. Times review, to wit: “Zoo is…about the rhetorical uses of beauty and metaphor and of certain filmmaking techniques like slow-motion photography. It is, rather more coyly, also about a man who died from a perforated colon after he arranged to have sex with a stallion. Mercifully, you don’t see this death on camera, though if you sit close enough to the screen, you will see a few fairly brief images of one sexual event, accompanied by graphic sounds.

“It isn’t pretty, which is why the images appear only on a small television monitor. Art-house devotees may be a tolerant lot, but it’s doubtful they want to look at a stallion’s erect penis stretched across the big screen like a sailboat boom, at least in public. Certainly such an image would work directly counter to the self-conscious poeticism of Devor’s film, to its carefully confected narrative of misunderstood barnyard love and baleful testimonial. It is, after all, difficult to sing of the bodies electric and equine amid a chorus of ‘yucks.'”

A sailboat boom,,,hilarious! Interested parties should click on the Zoo slide show that appears next to Dargis’s review. Devor provides the narration. 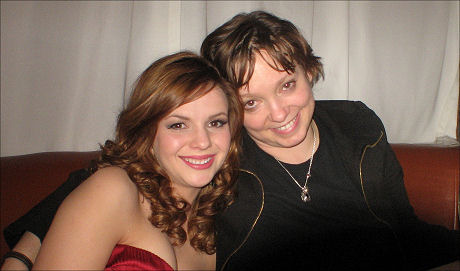 Stephanie Daley star Amber Tamblyn and director-writer Hilary Brougher at last night’s post-premiere party for the film, easily among the year’s finest, at the Bungalow Club on Melrose. I’ve been quiet about Stephanie Daley (it’s been 15 months since I saw it during Sundance ’06) but not for lack of admiration. I’ll be putting something up later his morning. Daley opened on 4.20 at the Angelika Film Center in New York, and will open at L.A.’s Regent on Friday (4.27), followed by openings in Boston (5.11) , San Francisco (5.25), Chicago (6.1) and Denver (6.29).
April 25, 2007 7:30 amby Jeffrey Wells