That Geico-Peter Frampton commercial is…I think“getting on my nerves” is the best way to put it. Kari Rigg says a few words, stops, and Frampton chimes in with his electronically synthesized voice-guitar thing (same bit he did 30-plus years ago on Frampton Comes Alive). I hate it and here I am talking about it — obviously it’s effective. (Frampton looked like such a baby-faced kid in ’76. He’s in good shape and all, but he looks like he’s at least 62 with the thinning white hair and the beard.)

Hollywood Reporter guy Gregg Goldstein posted this Picturehouse-HBO divorce story hours ago, and I’m only just getting around to it. Bob Berney‘s Manhattan-based distributor, jointly ruled by Time Warner divisions HBO and New Line Cinema, “will break virtually all ties with the cable network in the next one to three months as legal details are finalized,” Goldstein has written.
But why? How did it all go down? “A New Line source said the desire for the change came from the new regime at HBO, which took over following chairman/ CEO Chris Albrecht’s departure in the spring,” the story reads. “Albrecht was replaced by Bill Nelson in June.”
So Nelson isn’t a Berney type of guy, or vice versa? I’d like some more detail, please. I’m feeling under-nourished by this story’s cautious composition. I’d like to hear, for example, that Nelson and Berney had some kind of There Will Be Blood bowling-alley confrontation without the bowling pin, or something equally colorful. I want to hear a good story. I want to hear about powerful men eyeballing each other with their neck veins bulging and throbbing.
Berney had reported to HBO Films president Colin Calendar along with New Line co-chairman/co-CEO Michael Lynne.

“Sadly, it feels like the nerdiest, ugliest, meanest kids in the high school are trying to cancel the prom. But NBC wants to try to keep that prom alive.'” — NBC co-chief Ben Silverman quoted by E! News anchor Ryan Seacrest on 1.7.08 about the cancellation of the Golden Globes Awards telecast due to the WGA strike.

“Asked about the fate of the Oscars, one specialty distrib said Tuesday: ‘It’s like contemplating my own mortality. I know it’s something I have to face, but not today.'” — from a 1.8.08 Variety story by Timothy Gray and Cynthia Littleton called “Globes Eclipse Shadows Oscars.” 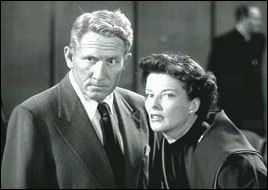 “There was a poignancy about the moment, seeing Hillary crack with exhaustion from decades of yearning to be the principal rather than the plus-one. But there was a whiff of Nixonian self-pity about her choking up. What was moving her so deeply was her recognition that the country was failing to grasp how much it needs her. In a weirdly narcissistic way, she was crying for us. But it was grimly typical of her that what finally made her break down was the prospect of losing.
“As Spencer Tracy said to Katharine Hepburn in Adam’s Rib, ‘Here we go again, the old juice. Guaranteed heart melter. A few female tears, stronger than any acid.’
“The Clintons once more wriggled out of a tight spot at the last minute. Bill churlishly dismissed the Obama phenom as ‘the biggest fairy tale I’ve ever seen,’ but for the last few days, it was Hillary who seemed in danger of being Cinderella. She became emotional because she feared that she had reached her political midnight, when she would suddenly revert to the school girl with geeky glasses and frizzy hair, smart but not the favorite. All those years in the shadow of one Natural, only to face the prospect of being eclipsed by another Natural?
“How humiliating to have a moderator of the New Hampshire debate ask her to explain why she was not as popular as the handsome young prince from Chicago. How demeaning to have Obama rather ungraciously chime in: ‘You’re likable enough.’ And how exasperating to be pushed into an angry rebuttal when John Edwards played wingman, attacking her on Obama’s behalf.
“Her argument against Obama now boils down to an argument against idealism, which is probably the lowest and most unlikely point to which any Clinton could sink. The people from Hope are arguing against hope.
“At her victory party, Hillary was like the heroine of a Lifetime movie, a woman in peril who manages to triumph. Saying that her heart was full, she sounded the feminist anthem: ‘I found my own voice.'” — from Maureen Dowd‘s 1.9.08 N.Y. Times column, “Can Hillary Cry Her Way Back to the White House?”

We all know Scarlett Johansson is set to star in another Elizabethan period drama (on top of The Other Boleyn Girl), called Mary, Queen of Scots. The good news is that Phillip Noyce, who’s excellent with scale and specificity and character, is set to direct.

The costume biopic, based on a script by James McGovern, is about the blonde Scottish queen with bee-stung, slightly parted lips who eventually became a rival to the English throne, which finally led to her beheading by Elizabeth in 1587. The presumption, obviously, is that the producers, Melanie Johansson and Alexandra Milchan, feel that appetites were merely whetted when Samantha Morton played Mary in a subplot of Elizabeth: The Golden Age.
Variety‘s Michael Fleming has reported that Mary Queen of Scots will be financed by Capitol Films and Relativity, and shot next spring in London and Scotland.

41 Comments
Get on the milkshake train 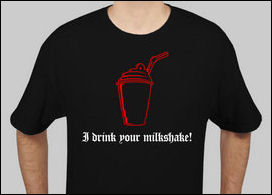 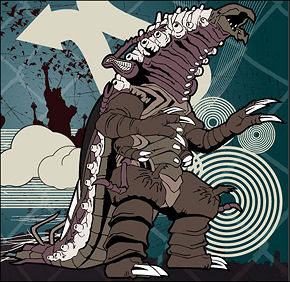 This is not the “Visual Effects of Zodiac” short on the 2-Disc Director’s Cut, but it obviously conveys pretty thoroughly what was faked in the film. Thanks to frankbooth for posting this yesterday. The DVD short is about explaining how everything was done (via elegant talking-head narration) as well as showing it.

73 Comments
Nothing means anything

If, God forbid, our culture allowed for the occasional lynching, certain media people would at least be talking this morning about having a necktie party for the pollsters who reported that Barack Obama was leading Hillary Clinton by 6 to 13 points among New Hampshire voters over the last three days.

Of course, the pollsters didn’t make these figures up. The depressing bottom-line is that there are millions of people out there who aren’t that deeply dug in. They don’t really know what they want, who they’re supporting, what channel to watch, what diet to follow or what they really believe. They just tell pollsters what they’re feeling at a given moment, and it only means what it means right then and there…if that. Nothing means anything. The walls can fall in at any given moment. There is no terra firma — only tremors.
Especially if a sudden surge of sisterly empathy takes hold. On top of which, as we all know, it’s not character and judgment but White House experience from being married to a two-term President that really counts. That and a truly exceptional, cootie-dispensing ability to alienate and infuriate and make certain people (like myself) literally shudder at the notion of Clinton taking the nomination.
And the old Bradley effect always helps. An MSNBC reporter just passed along a story about being in a bar a couple of nights ago and talking to a local guy who said that the polls were wrong and that Obama wasn’t going to win. “And I’ll tell you why,” the guy said. “I’ve lived here all my life and people are not being honest with pollsters about their true intentions.” The MSNBC reporter thought at the time that the guy had maybe had one too many, but now…

Yesterday New York‘s “Vulture” column quoted Grub Street’s Josh Ozersky as saying that Daniel Day Lewis‘s “I drink your milkshake!” line from There Will Be Blood (i.e., spoken in the final bowling-alley scene) “will soon enter the pop-culture catchphrase lexicon, nestling alongside such former lazy-writer tropes as ‘I see dead people,’ ‘Say hello to my little friend,’ ‘Just when I thought I was out, they pull me back in’ and all the rest.” 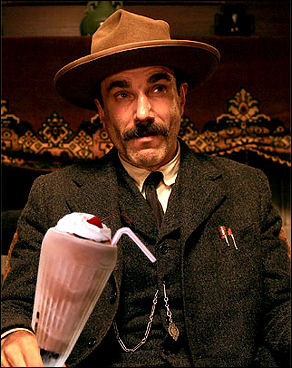 I would say it’s already part of the pantheon, but if you listen closely to this mp3 file you’ll recall that the key flourish in Lewis’s reading of the line is straight out of the Anthony Hopkins hymnbook and is in fact lifted from The Silence of the Lambs. I’m referring to the sucking sound that Lewis makes (“vfff-vfff-vff-vfff!!”) which is the exact same one that Hopkins makes after saying “I ate his liver with some fava beans and a nice Chianti.”
Listen to it again. 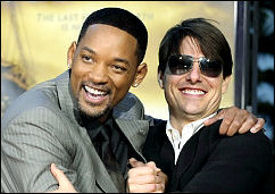