Support on Patreon Follow @wellshwood
19 Comments
“We Are The Ones”

“We Are The Ones,” the new will.i.am Obama video. More of a stadium-chant thing than a “Yes We Can” spiritual mantra whisper piece, but in synch with the heavier drumbeat of the moment.

I’ve just been told of a Saturday morning box-office shocker as far as tracking data is concerned. Will Ferrell‘s Semi-Pro (New Line) is now looking like it’ll earn only about $15,184,000 for the weekend, according to a rival studio’s estimate. That’s over $25 million less than what Fantasy Moguls‘ Steve Mason predicted just yesterday.
This isn’t a typo — the basketball comedy did only $5,384,000 yesterday.
Semi-Pro was looking like a modest-to-decent opener last Tuesday until a big surge in tracking data two days ago, which led Mason to predict a weekend tally of $40 million-plus.
Is this the biggest tracking wrongo of all time? Something was clearly wrong with the methodology. (Too small a sample?) This is worse than the polling numbers for the New Hampshire and California primaries. Mason has egg on his face and some explaining to do.
Vantage Point is #2 with $11,954,000…off 48% from last weekend. (That’s all? For a movie as bad as thsi one? Another indicator of American taste buds.) The Spiderwick Chronicles will come in third with $8,438,000. The Other Boleyn Girl is in fourth place with 8115 (only 1100 theatres, almost $7000 a print, not bad). Jumper will come in fifth with roughly $7,288,000.
Step Up will be sixth with $5,372,000. Fool’s Gold is seventh with $4,452,000. No Country for Old Men benefitted from the Best Picture win with $4,003,000 and an eighth-place finish. Juno wil be ninth with $3,515,000, and Penelope will come in tenth with $3,197,000 — a disaster.

After speaking with refugees during a recent trip to Iraq, Angelina Jolie has written in an opinion piece for the Washington Post called “A Reason to Stay in Iraq” that the surge — the reinforcement of U.S. troops — is working by creating the beginnings of a haven that will allow humanitarian programs to take effect. 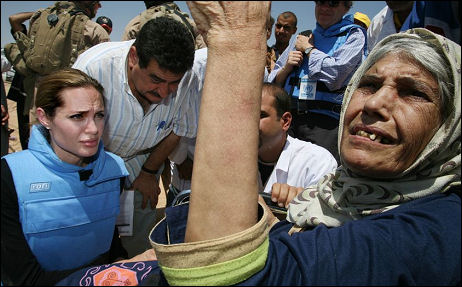 Jolie has done two things with this editorial . She has advanced an idea that the stay-the-course military strategy and goals of the Bush administration in Iraq are synonymous with basic humanitarian goals to help refugees. And she has, of course, strengthened the hand of the McCain campaign’s argument that we need to dig in and stay for the long haul. She’s coming from a caring place and I don’t think she’s being dishonest about what she’s observed over there, but I’m not sure she’s said the right thing.
“I can only state what I witnessed,” Jolie wrote. “It will be quite a while before Iraq is ready to absorb more than 4 million refugees and displaced people. But it is not too early to start working on solutions.”
Which will take decades to successfully implement, right? As a result of our invading Iraq, destroying its infrastructure, scattering the military, creating havoc, spreading misery and inspiring more anti-U.S. hatred among Islamic fundamentalists than had ever existed before, Jolie is essentially saying that the only thing for U.S. forces to do is to remain there for years and decades to try and un-do all the harm and chaos. Does this strike anyone as diseased Orwellian logic on some level?
Jolie works on behalf of the U.N. High Commissioner for Refugees. She’s lobbied the presidential candidates and congressional leaders to step up financing for aid to displaced Iraqis. UNHCR has asked for $261 million this year, which is “less than the U.S. spends each day to fight the war in Iraq,” she wrote.
“When I asked the troops if they wanted to go home as soon as possible, they said that they miss home but feel invested in Iraq,” she stated. “They have lost many friends and want to be a part of the humanitarian progress they now feel is possible.”

Responding to a question from N.Y. Times reporter Jacques Steinberg about charges that journalists have covered Barack Obama more fairly or affectionately than Hillary Clinton‘s, Newsweek‘s Jonathan Alter said “that the attempt by the Clinton camp to weigh various stories represented a kind of ‘silly, even-Steven-itis.
“‘People got it into their head that if you say something good about a candidate, you [also] have to say something bad about him, and if you don√É¬¢√¢‚Äö¬¨√¢‚Äû¬¢t, that√É¬¢√¢‚Äö¬¨√¢‚Äû¬¢s not fair. What the Clinton partisans wanted was for us to create a phony balance that was at odds with what our eyes were telling us. That√É¬¢√¢‚Äö¬¨√¢‚Äû¬¢s not the job of a journalist.’
AP reporter Mike Glover, travelling with the Clinton campaign, told Steinberg that retired AP veteran Walter Mears “used to say that who wins is part of the story. We√É¬¢√¢‚Äö¬¨√¢‚Äû¬¢re covering a candidate who√É¬¢√¢‚Äö¬¨√¢‚Äû¬¢s lost 11 straight primaries. [But the reporters travelling with Obama] are covering a candidate who has won 11 straight primaries.”
On top of which is the common observation that many press people dislike — you could use the word “hate” — Clinton campaign staffers. It was obvious that genie was out of the bottle a long while ago. It was re-emphasized recently when MSNBC’s Chris Matthews talked about how the Clinton strategy of “knee-capping” journalists hadn’t worked. MSNBC’s Tucker Carlson has also stated flat-out that he and other journalists are not fans of Sen. Clinton’s staffers.

No surprise that Paramount would cancel HD-DVD versions of Bee Movie (due 3.11), Sweeney Todd (4.1) and There Will Be Blood, given the defeat of that format by Blu-ray. But it seems odd that they wouldn’t have worked out release dates for those titles to come out in Blu-ray.
Everyone knew HD-DVD was dead late last year when word began to get around that Warner Bros. would join forces with Blu-ray. (The announcement came on 1.4.08.) It would have been a mark of dereliction if PHV execs hadn’t heard the rumblings about this last fall and begun to make plans.
If I’d been running things, I would have said in a memo last October or November that PHV should quietly start making plans for Blu-ray releases of all titles in preparation for HD-DVD’s likely and/or eventual defeat. But PHV hasn’t prepared, it seems, or they wouldn’t be saying that the above-listed titles and more “will be released on Blu-ray sometime in the future,” per Nikki Finke‘s 2.29 story.