Poor Bill Hayward — son of Leland, brother of Brooke, a producer until the mid ’80s — shot himself almost two weeks ago in Castaic, California (a little vacation area north of LA, halfway to Bakersfield), and the AP report only just broke. He passed on March 9th.
We all know that people are less likely to off themselves if they’re married and have children. It also helps to gave a community of friends at work or near their home(s), and having a dog or a cat doesn’t hurt. Ditto parrots, lovebirds, aquarium fish, pet snakes…anything living that you need to feed and care for.
Hayward’s last produced film, Blue City, came out 22 years ago. His wangled producing gigs on three films starring or directed by by Peter Fonda (whom he knew at least partly through Dennis Hooper, who was married to his sister from ’61 to ’69) — Easy Rider, Idaho Transfer and Wanda Nevada.
Hayward appeared in a 1999 DVD doc called “Easy Rider: Shaking the Cage.”

Drillbit Taylor has a 10% positive rating from the Rotten Tomatoes creme de la creme. I wouldn’t want to be anywhere near the paying customers after they’ve seen this thing. There’s a very weird climate inside a theatre when audience members starts to slowly realize they’re being burned. I know a guy who says he enjoyed it, but I would imagine that most viewers will mutter to themselves, “They charged me money to see this?” 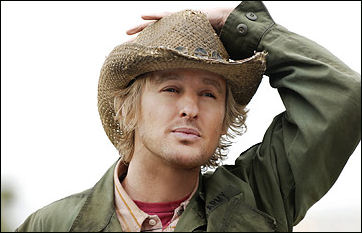 If I were Judd Apatow I would do the old Desert Hot Springs hideout routine for the next couple of weeks. Slip on a pair of shades and one of those celebrity fishing hats with the brim pulled down and get into the Prius and hightail it.
“As an admirer, mostly, of Mr. Apatow’s oeuvre, I was inclined to believe that Drillbit Taylor was a cheap knockoff, that the producer credit Mr. Apatow receives at the beginning was akin to the Rolex insignia on the watch I bought for $20 on Canal Street a while back,” writes N.Y. Times critic Tony Scott.
“But it makes more sense to think of this dumb little picture, with Mr. Apatow’s wife, Leslie Mann, in a supporting role, and Seth Rogen, one of his alter egos, sharing credit for story and screenplay, as part of the Apatow discount line. ‘You get what you pay for,” the tag line on the advertisement says. I saw it free, and I still feel cheated.”
Scott also mentions “risks of backlash and brand dilution.” I may as well repeat my agreement with this, which I stated a couple of days ago, to wit: “On top of Forgetting Sarah Marshall, another Apatow comedy that I’ve yet to review but which I felt kind of badly about, this is probably the beginning of a temporary downgrade in the brand.
“It’ll be restored in August with Pineapple Express, and it may be turn out that Marshall will do okay commercially. But the notion of the Apatow seal being some kind of dependable assurance of a rollicking good time is, for now, out the window.”

The most reasonable-sounding plot rumor so far concerning Clint Eastwood‘s Gran Torino (certainly more palatable than yesterday’s near-ridiculous return-of-Dirty-Harry idea, which was floated by an AICN guy who claimed a certain inside knowledge due to a car deal that went south) has been posted by Film Jerk’s Edward Havens.
He’s heard it will be “a simple, quiet and compelling drama about Walt (Eastwood), a rural bigot who finds his outlook on life changed after a family of Hmong immigrants move in to the home next to his own, striking up a friendship with Tao, the family’s teenaged son, over the older man’s classic car.”
Right off the top this sounds like a near-perfect Eastwood film — quiet, soulful, moralistic, dealing with redemption — and exactly the sort of thing that will do well in the ’08 awards derby. I love the fact that the fast-moving Eastwood hasn’t even shot this thing yet, and yet plans to have it out by December a la Million Dollar Baby.
The terms Hmong and Mong refer to an Asian ethnic group from the mountainous regions of southern China. Hmong currently live in several countries in Southeast Asia, including northern Vietnam, Laos, Thailand, and Myanmar.

The logo for the Beijing Olympic Games (8.8 to 8.24) is presumably familiar… 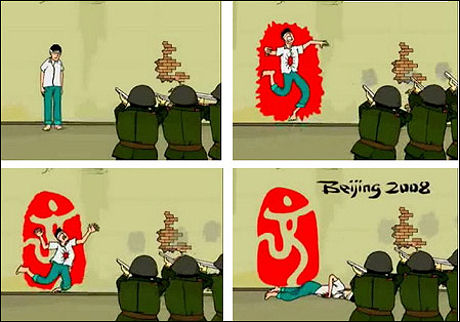 According to legend, a voter said to Adlai Stevenson during one of his two runs (’52 or ’56) for the Presidency, “Governor, all the thinking people are with you.” Stevenson replied, “Thanks but that’s not enough. I need a majority.”

Visual proof was revealed earlier today that Bill and Hillary Clinton were at least casually infected with the Rev. Jeremiah Wright virus when the Chicago minister visited the White House on 9.11.98 for a gathering for religious leaders. The Huffington Post is reporting that Hillary, “according to her recently-released schedule for the day, was also present at the gathering.” Inviting a seething hate-monger to this event obviously reflects on the flawed character and judgment of the Clintons. 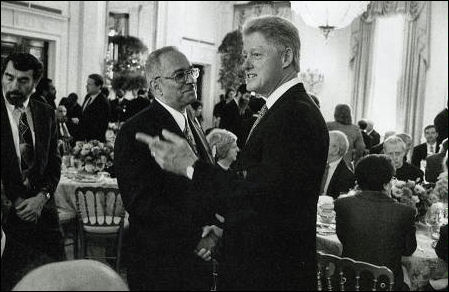 If anyone has a copy of Brad Ingelsby‘s The Low Dwellers, the script that Ridley Scott and Leonardo DiCaprio plan to make into a film sometime down the road, please shoot up a flare. The combination of the words “heated bidding war” and “echoes of The History of Violence and No Country for Old Men” in Steven Zeitchik‘s 3.21 Hollywood Reporter story have triggered the usual intrigues.
“Set in Indiana in the mid-1980s, the story centers on a man (DiCaprio) trying to assimilate into society after he’s released from jail, only to find someone from his past pursuing him to settle a score,” Zeitchik’s summarizes. (If this had been made in 1950, it would have been a Robert Mitchum movie.) “In addition to the pursuer, a third male character and a female love interest are said to figure prominently,” blah, blah.
I love the part about Ingelsby being “a twentysomething working as an insurance salesman in Pennsylvania” who “[worked] on the script in his spare time and has yet to step foot in Hollywood…but he has hit the spec jackpot, with the project selling for mid-six against low-seven figures.” Hah!
DiCaprio and Scott will co-produce, with the latter obviously directing and Leo starring. They recently wrapped Body of Lies for Warners. DiCaprio will next make Shutter Island with Martin Scorsese directing. Scott’s next film is (ugh!) Nottingham, the Robin Hood drama that will portray Russell Crowe‘s Sheriff of Nottingham as a cool good guy. (As long as he loses 50 pounds.)

Every famous black comic who’s ever performed in a club or a concert hall (Chris Rock, Richard Pyror, Eddie Murphy, Bill Cosby, Bernie Mac…anyone) has joked about dorky white-people behavior, and every time they do this white audiences throw their heads back and howl. I’ve been to clubs and concerts, seen this time and again. Whites love being lampooned because there’s obviously some imbedded truth involved (as with all good humor) and it’s a relief to just kick back and recognize it. And yet Barack Obama describes his white grandmother in candid, matter-of-fact terms as a “typical white person” — i.e., suspicious and uncertain where black folks are concerned — and he gets jumped on by the TV commentators.

To judge by the trailer, Vadim Perelman‘s Life Before Her Eyes (2929/Magnolia, 4.18) is some kind of turbulent-memory thriller about a suburban mom (Uma Thurman) dealing with a 15th anniversary of a Columbine-like high school shooting that killed her best friend (Eva Amurri). 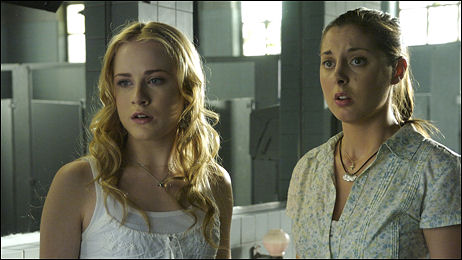 The problem, for me, is that the teenaged Thurman is played by Evan Rachel Wood. How do you roll with this? How do you turn of the alarm bells would tell anyone this is biologically unfeasible? The interesting approach, of course, would have been to have Wood play both roles. (It’s not difficult to make a 19 year-old look 35.) Or better yet, digitally de-age Thurman to make her appear like she was in, say, Dangerous Liasons or Where The Heart Is. That, come to think, would be really worth seeing.

PageSix.com employed 18 editorial and support staffers? That’s a lot of people, given what that site does. Or did, I should say. Nikki Finke is reporting that the 24/7 operation is shutting down, more or less because PageSix.com can’t compete with TMZ.com. The print edition in the New York Post as well as its web page will continue, but that’s all she wrote for most of the 18. 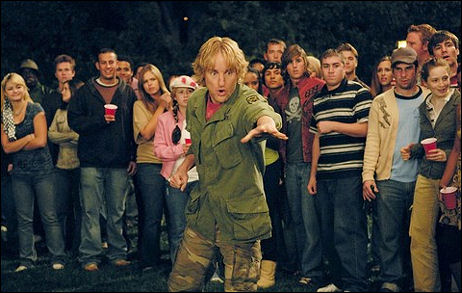