The second half of Che, also known as Guerilla, just got out about a half-hour ago, and equally delighted although it’s a different kind of film — tighter, darker (naturally, given the story). But I’ve been arguing with some colleagues who don’t like either film at all, or don’t think it’s commercial. Glenn Kenny and Kim Voynar feel as I do, but Anne Thompson is on the other side of the Grand Canyon. Peter Howell is in the enemy camp also.

I know I predicted this based on a reading of Peter Buchman‘s script, but the first half of Steven Soderbergh‘s 268-minute Che Guevara epic is, for me, incandescent — a piece of full-on, you-are-there realism about the making of the Cuban revolution that I found utterly believable. Not just “take it to the bank” gripping, but levitational — for someone like myself it’s a kind of perfect dream movie. It’s also politically vibrant and searing — tells the “Che truth,” doesn’t mince words, doesn’t give you any “movie moments” (and God bless it for that).
It’s what I’d hoped for all along and more. The tale is the tale, and it’s told straight and true. Benicio del Toro‘s Guevara portrayal is, as expected, a flat-immersion that can’t be called a “performance” as much as…I don’t know, some kind of knock-down, ass-kick reviving of the dead. Being, not “acting.” I loved the lack of sentimentality in this thing, the electric sense that Soderbergh is providing a real semblance of what these two experiences — the successful Cuban revolution of ’57 and ’58, and the failed attempt to do the same in Boliva in ’67 — were actually like.
Oh, God…the second half is starting right now. The aspect ratio on the second film is 1.85 to 1, but the first film was in Scope 2.35 to 1.

The most keenly anticipated film of the festival begins in two hours and 25 minutes. Four hours and 28 minutes plus a break between the two films, so figure five hours. I’m going to text a mini-review of Part One (i.e, The Argentine) during this break, and probably some kind of quickie judgment after the whole thing ends sometime around 11:30 pm. But a full-on review won’t happen until tomorrow morning.

In the opinion of The Page‘s Mark Halperin, “One of the best-written (and delivered) speeches of the campaign.” 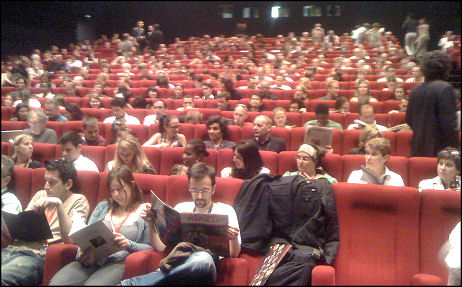 Prior to today’s 11:30 Changeling screening at the Salle de Soixentieme. It’s an Eastwood film, all right. Longish and leisurely (but not slovenly) paced. Delivers a keen sense of humanity and moral clarity. Offers a complex but rewarding story. Really nice music, as usual, that lends a feeling of warmth and assurance. Superbly acted, shot, and paced (not every movie has to feel like a machine gun). More than a few top-notch performances. Some overly black or white-ish characterizations, but not to the extent that they bug you horribly. A movie that understands itself and its subject matter completely. Aimed at adults (i.e., those 25 and over with the ability/willingness to process this sort of thing). Not a great film, but a very fine one. Terrible last line, though.
May 21, 2008 6:31 amby Jeffrey Wells

“When Changeling was translated into French as L’Echange, many folks liked The Exchange better. Director Clint Eastwood was noncommital at the press conference, but [producer Brian] Grazer thinks it will stay Changeling in the U.S.” — from Anne Thompson‘s Variety column, posted a little while ago.
If Grazer “thinks” it will stay Changeling, that means he’s not 100% sure, which means the title is in play. I think The Exchange mildly sucks myself. It sounds dry and underdescriptive — close to meaningless . It suggests an allusion to some sort of financial-barter transaction rather than a switch. And even something that clearly refers to one young boy replacing another doesn’t sound right to me, having now seen Eastwood’s film.
Changeling without a “The” is probably the one to stick with.

“One under-estimated factor is the nature of Mrs. Clinton’s ambition. As her life has progressed from those salad days at Wellesley, her own long march through the institutions has been fraught with awful moral compromise. In this campaign alone, the pacts she has made with various devils to keep ahead of the pretender to her throne have been particularly brutal.
“Somewhere in her head, she justifies all the principles she has trashed over the years, all the enemies she has allied with, all the racists she has won over, all the abused women she has smeared…on the grounds that if she becomes president, the good she can do will outweigh it all.
“These are the sacrifices all people who seek power for the good must undergo, she tells herself. To have it all taken away from her at the last minute — by someone who hasn’t made as many compromises — is therefore unimaginably cruel. She cannot accept it because her life’s work is at stake. So she struggles on. Her private life, her marriage, is fused with her public life. So she has nowhere else to go. Which is why she stays. This is all there is for her.
“Is that crazy? I don’t know. But it is immeasurably sad. Not sad enough for pity. She did this all herself. But sad nonetheless.” — 5.20 entry from Andrew Sullivan‘s Daily Dish blog.

I was going to tap out a glowing review of Terence Davies‘ Of Time and the City, a spiritual lament about the director’s hometown of Liverpool. It’s a sublime marriage of poetry, archival footage, snippy social criticism, and nostalgia for a lost and irretrievable past. It hits you gently and yet powerfully. Especially if you have a feeling for the fraying of social cohesion and family structure that has happened everywhere since the ’50s. 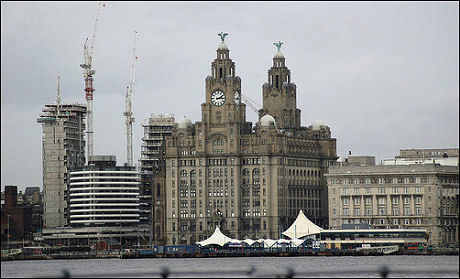 Davies — short, bespectacled, pinkish complexion, gleaming white hair, traditional black tuxedo — took a bow before last night’s 10 pm showing at the Salle du Soixantieme. One of his producer pals said on the mike, “He’s back…and he’s beautiful.”
And like I said, I was going to write about it…but the line for the 11:30 showing of Clint Eastwood‘s Changeling/The Exchange — 85 minutes from now! — is already getting pretty long so I’d better get down there. Why don’t people just hang back and wait until 10:45 or so to line up? Who wants to wait in line this long? 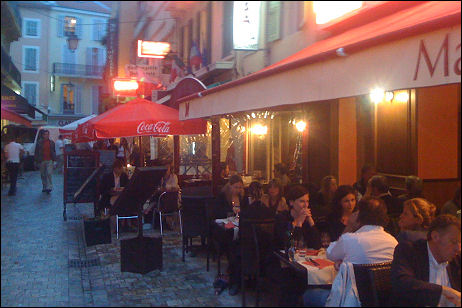 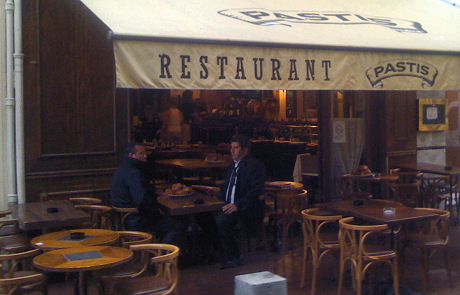