Barack Obama‘s campaign is calling an illustration on the cover of the 7.21 issue of the New Yorker magazine, showing a turban-headed Obama fist-bumping an AK-47-slinging Michelle in the Oval Office, as “tasteless and offensive.” It’s meant as a satire, of course, of the right-wing scum who’ve been pushing the Manchurian candidate myth as well as the rural boobs who’ve been buying into it, but if I were on the Obama team I’d probably take one look at this thing and go “jeeeez!” 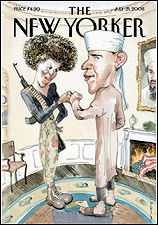 Here’s an interview about the cover between New Yorker editor David Remnick and the Huffington Post‘s Rachel Sklar.

Here’s a thoughtful take on the recent Inglorious Bastards dig-down by the Newark Star-Ledger‘s Stephen J. Whitty. Satisfies my concept of a good read, the flattery factor aside.

Let’s help Envelope columnists Tom O’Neil and Pete Hammond narrow down their possible Best Picture Oscar list, shall we? O’Neil has just posted a big long contender rundown but a lot of titles are instant scratch-outs, I feel, and a few are big maybes.

My choices for the leading or most deserving Best Picture contenders right now, in order of likelihood: The Curious Case of Benjamin Button (certainly not the front-runner, but the contender with the best script), Milk, Doubt, Gran Torino, Frost Nixon, W and The Visitor. I say this knowing that The Visitor has an uphill climb ahead of it. I’m hearing “yes” and “no” about Doubt. I know that W works on the page. If I was one to recommend that WALL*E be nominated for Best Picture instead of Best Animated Feature, it would definitely be on this list, but since I strongly believe in maintaining the Berlin Wall between reality and animation, it’s not listed.
In my eyes, Steven Soderbergh‘s Che (i.e., The Argentine and Guerilla) easily qualifies as a Best Picture contender — it’s a phenomenal history lesson, high art and a first-rate epic. Of course, there’s reason to wonder if it’ll even open this year, to hear it from the buyers. I know it damn well ought to open and at least try for some award-season propulsion, but guys like myself saying “it’s great” doesn’t cut much ice with the bottom-liners.
I’m sketchy on several titles right now, but I would think the following could be tossed without a second’s hesitation: Appaloosa (possibly worthy Ed Harris western but New Line leftover status dooms it); Burn After Reading (a dry Coen brothers goof, not an Oscar film); Body of Lies (I know nothing about this brilliant Middle Eastern spy thriller that would qualify it as Oscar bait); Changeling (Best Actress nom for Angelina Jolie but the film, while dramatically solid and well made, just isn’t stratospheric enough); The Dark Knight (are Tom and Pete having us off?), Defiance (an Ed Zwick World War II movie about Russian-Jewish resistance guerillas…hello?); Mamma Mia! (all right, that’s enough); Miracle at St. Anna (a Spike Lee movie in which a bank teller is shot by an old guy having a memory seizure?) and Vicki Cristina Barcelona (can’t and won’t happen).
I don’t know enough one way or the other about Australia (younger audiences groaning at the trailer?), Cheri, Happy-Go-Lucky, The Reader, Secret Life of Bees, Seven Pounds (Will Smith treacle factor?) and The Soloist.

Barack Obama‘s time-to-leave-Iraq stump speech is in Monday’s (7.14) N.Y. Times op-ed page, presumably to make the point that he hasn’t waffled or softened his basic position. Which he hasn’t by my sights. He knows that complications and surprise potholes are inevitable, of course, as does everyone else. Life is sometimes a poker game, and however clear your objective, you have to play what’s dealt. 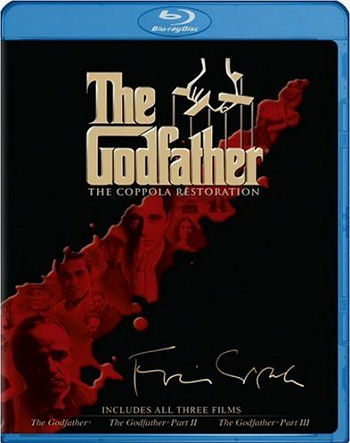 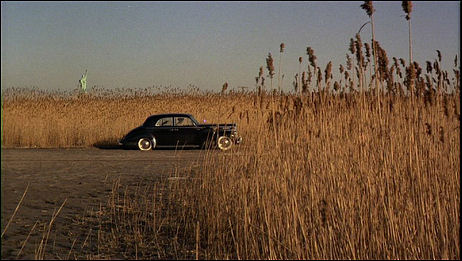 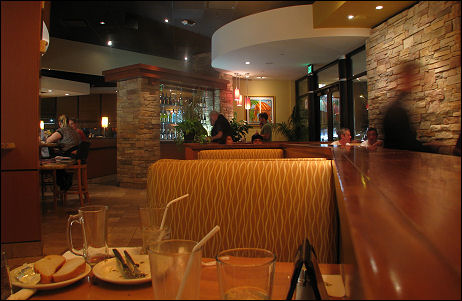 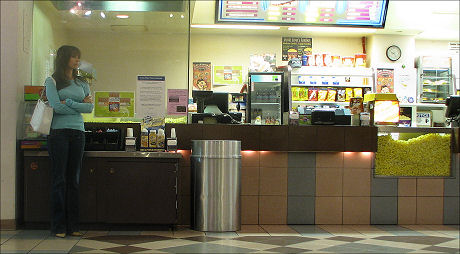 Cinemascope‘s Yair Raveh reviews Kim Aubrey‘s 18-minute doc about the restoration of the first two Godfather films, and which will be included in the Godfather “Coppola Restoration” DVD and Blu-ray set that comes out in the fall. (The third Godfather film was also worked on, but who cares…am I right?) 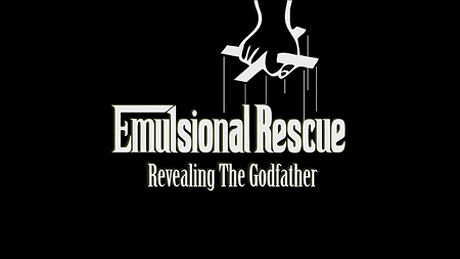 In his brief New York magazine review of Mamma Mia!, David Edelstein says that Pierce Brosnan‘s singing “is the best imitation I’ve heard of a water buffalo.” As long as actors singing dreadfully is on the table, I should mention Frances Farmer‘s crooning of “Aura Lee” in Come and Get It! (’36). Her contralto sounds a cross between a seal and a loon. It may seem unkind to mention this, given Farmer’s tragic life and all, but I’ve had this thought in my head for ages.

The Dark Knight “is noisy, jumbled, and sadistic,” writes New York‘s David Edelstein. “Even its most wondrous vision — Batman’s plunges from skyscrapers, bat-wings snapping open as he glides through the night like a human kite — can’t keep the movie airborne. There’s an anvil attached to that cape. [And] the lack of imagination, visual and otherwise, turns into a drag.
“The tumult is spectacularly incoherent. Nolan appears to have no clue how to stage or shoot action. He got away with the chopped-up fights in Batman Begins because his hero was a barely glimpsed ninja, coming at villains from all angles in stroboscopic flashes. There are more variables here, which means more opportunities to say ‘What the f— just happened?'”

For those who saw Meet Dave this weekend…

“The dinner cost at least two grand / She made a point to order wine / Later on she moved my hand / Well across her borderline / I boldly went where many, many / Many men have gone before / Dennis Rodman, Warren Beatty, Vanilla Ice, and dozens more / Dear diary, can sex be love? / She’s so responsive, so adoring / She called my hand a golden glove / And Cynthia is huge and boring.” — Song lyric from “A-Rod: The Musical,” composed by The New Yorker‘s Ben Greenman.

God’s natural law says that 70% to 80% of all films (or any creative work of any kind) will be irksome, problematic, mediocre or just crap. What, then, to make of a critic who’s given positive reviews to 19 out of 25 recent films? It’s an old saw and an old refrain, but Eric Childress‘s mission in life is to scold those critics given to excessive warmth and generosity.