If Sarah Palin is only on [the Republican] ticket to try to get disaffected Clinton supporters to cross over, it’s a bad choice. Joe Biden may already be practicing his drop-dead line for the vice-presidential debate: “I know Hillary Clinton. Hillary Clinton is a friend of mine, and governor, you’re no Hillary Clinton.” — from Gail Collins‘ 8.30 N.Y. Times column, titled “McCain’s Baked Alaska.” 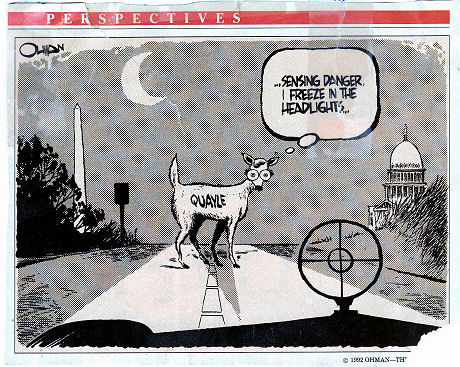 I just heard from two friends who came out of this evening’s David Fincher tribute at the Telluride Film Festival. They were mainly calling to share impressions of the 20-minute reel shown from Fincher’s The Curious Case of Benjamin Button (Paramount, 12.25), which was shown as part of a two-hour presentation that included a q & a with Fincher.

To my displeasure and irritation, their reactions to the Button footage, and frankly the reactions of others they spoke to as they left the theatre (including a couple of journo-critics and a respected director of an ’07 political documentary), were not all that good. Wait…what? This is supposed to have Oscar heat, this thing. Fincher’s possible home run, payback for the Zodiac diss, whatever.
My friends had one unqualified positive reaction, which was to the performance by Taraji P. Henson (Hustle and Flow) as Brad Pitt‘s adoptive mother. But beyond that, the Button footage felt vaguely underwhelming, they said.
It just wasn’t particularly exciting or engrossing, one explained. Excellent visual effects (old Pitt as a baby, etc.) and fine cinematography but with a kind of enervated, waiting-for-something-to-happen quality. The footage showed portions of the entire film, the other friend said, but in a way that kept you from getting into it with cuts coming too abruptly. And so people were kind of…whatever, grunting and muttering on the way out.
I didn’t like hearing this, of course, because I’m a fan of Eric Roth‘s script as well as an overall Fincher fan so I started arguing with these two. What were people looking for? I asked. What is it that people wanted to happen? It’s just a reel, a taste of a feature film.
They only repeated that whatever it was that the Button reel was trying to sell, they didn’t get it or get into it, and some others they’ve spoken to since it ended feel the same way.
One of them actually said that the Button reel had convinced him that Fincher has “peaked” and that “it’s all downhill from here on.” Oh, give me an effin’ break!
The Fincher tribute footage ran about an hour (or just under an hour) altogether, with 20 minutes for Button and 35 or 40 minutes showing pieces of past Fincher films (Zodiac, Fight Club, Se7en, etc.) The q & a between Fincher and Variety‘s Todd McCarthy ran another hour, they said.

Posted on Wonkette at 3:55 pm today by Jim Newell. 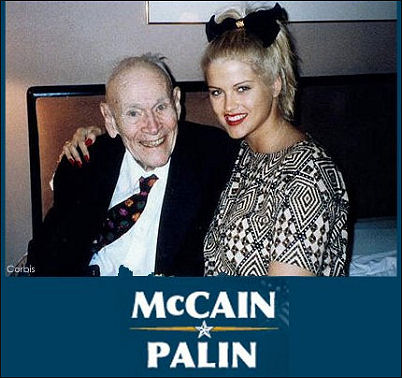 Final Telluride photo of the day, snapped earlier this afternoon. The screenings at this much-beloved festival are finally beginning this evening. I for one am getting impatient. Will someone please review something…anything? I’ll settle for street talk, restaurant reviews, scenic descriptions. 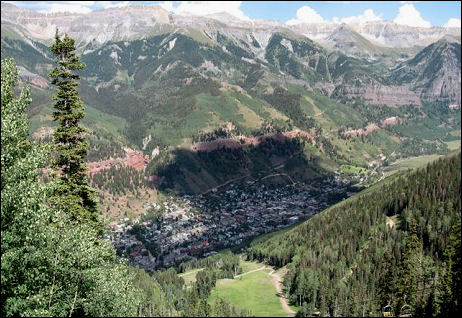 THINKFilm president and co-founder Mark Urman, a good guy with a bad brief, has jumped off his once-proud but recently foundering, debt-plagued ship (due to David Bergstein‘s derelict financial dealings since buying Thinkfilm in late ’06) and swam through heaving, white-capped seas over to the good ship Senator, which threw him a line by prior arrangement.
As of 10.1, Urman will officially be president of Senator Entertainment, a newly formed distribution outfit. The idea will be to make English-language films and establish a beachhead as a U.S.-based distributor. The company recently purchased U.S. rights to Public Enemy No. 1, which will be shown at the upcoming Toronto International Film Festival. It costars Vincent Cassell and Gerard Depardieu. This French gangster film is on my list of gotta-sees.

This morning I linked to a clip of MSNBC’s Keith Olbermann comparing aspects of Barack Obama‘s big Denver speech last night to Michael Douglas‘s third-act speech (written by Aaron Sorkin) at the end of The American President. This idea is brought full circle in a q & a in the current GQ between Sorkin and Mickey Rapkin.
Rapkin asks, “Have you met Obama? What do you make of him?” And Sorkin says, “The first time I met Barack Obama — I should say the only time I’ve met Barack Obama — was a year ago, when he was doing fifty-person-cocktail-party fund-raisers. He flattered me by saying, “My intention is to steal a lot of your lines.” 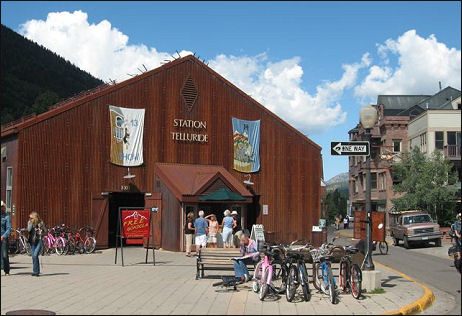 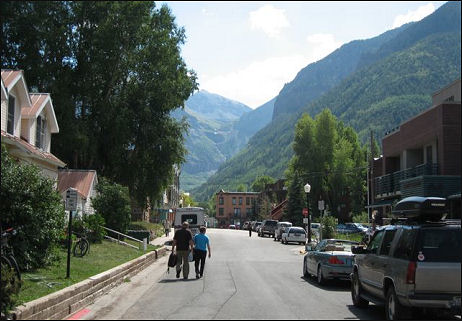 The world is waiting with bated breath for Telluride reactions to Paul Schrader‘s Adam Resurrected in which Jeff Goldblum plays Adam Stein, an entertainer who once performed for the condemned in a concentration camp, and Willem Dafoe plays Commandant Klein. Klein and Stein — a vaudeville act from the 1920s. 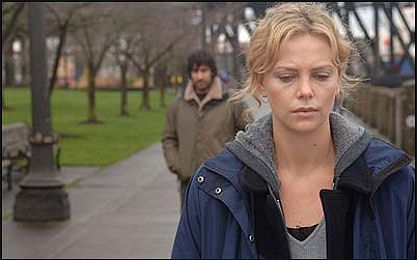 La Opinion‘s Josep Pareda interviewed me yesterday (or was it Wednesday?) for a piece posted today about Che‘s distribution troubles.

The piece is in Spanish, of course, so I managed a rough English translation via Google language tool. The headline — Che busca distribuidor — obviously means “Che looking for distributor,” and the subhead says that “the film with Benicio del Toro arrives in Toronto with no release date in U.S.”
Here are the portions that deal with my comments:
“After its showing at Cannes, critical reactions varied between flattery — manifesting in the film’s absolute defense by Jeffrey Wells, one of the most prominent scholars of cinema on internet thanks to its essential page Hollywood Elsewhere — and skepticism.
“Wells told HolaLA! “I was not bored by a single minute [of Che]. This is not a traditional drama. There is no emotional revelation. It does not employ any of the conventional tricks or cathartic moments: Where’s the girl, where they crying? None of this happens. The film is operating on a higher level than that. It basically lets you feel what it was like to hang with Che during the two most intense chapters of his life.”
But “the idea is to absorb both as if it were a feast. I knew this when I read the two scripts and realized it was an up-and-down epic like Lawrence of Arabia. The first part is the triumph and the second is when [the character] loses common sense . Now, could one see Lawrence of Arabia in two parts? Theoretically yes, but why? It was not made with that intention. ”
And yet dividing Che into two parts “seems to be consensus,” said Wells, who at the same time assured that while this wasn’t director Steven Soderbergh‘s intention or current wish, “It would not be the end of the world.” 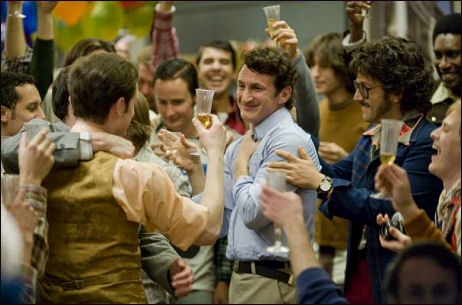 A week before the 9.5 U.K. release, In Contention‘s Guy Lodge has bitch-slapped Guy Ritchie‘s RocknRolla (Warner Bros., 10.8), calling it a “mess” that “falls apart” early on. This primes the pump, of course, for those attending next week’s Toronto Film Festival, where Ritchie’s film will be shown a few times.

“[During] the first few minutes of RocknRolla, hopes are high that Ritchie has rediscovered the fleet-footed timing and lightness of touch that made his trend-setting 1998 debut Lock, Stock and Two Smoking Barrels such a delight, and its lesser follow-up, Snatch, such a guilty pleasure.
“The animated credit sequence, as you may have heard, is a thing of considerable beauty. More importantly, the opening scene, which employs swift, sexy cuts between multiple actors and locations to maintain a multi-voiced monologue on the fortunes of present-day London (Ritchie presumably wrote this before the recession), is something to behold.
“But then the pace settles, the actual narrative reveals itself — and the whole enterprise, shorn of these initial stylistic tics, steadily falls apart. Ritchie has dialed down his style of story construction since the incomprehensibly convoluted Revolver but he may have overcompensated — the size of the ensemble notwithstanding, there is really very little storytelling motor here.“The flimsiness of the entire construction would matter less if there were more wit and crackle in Ritchie’s script, or if the actors, at least, appeared to be having fun with it. Sadly, in the wake of his failures, Ritchie appears to have wholly lost his confidence and spontaneity as a writer; even the cleverer one-liners feel overworked and over-worded, tripping up the actors at every turn.
“More alarming still, Ritchie’s writing betrays precious little acquaintance with his characters or his story world. His weirdly dated heavies appear more informed by Get Carter than any facet of contemporary urban Britain.
“Twee soundbites like ‘You’ve got more feet on the street than coppers on the beat’ imply an artist hopelessly out of touch with his subject, particularly in a year that has given us the thrilling gangster patois and linguistic invention of Martin McDonagh‘s In Bruges.”