You think this is funny? Beverly Hills Chihuahua (Disney, 10.3), which I believe without benefit of hard data will be primarily be seen by McCain supporters and their families, is just around the corner, and it’s no joke. 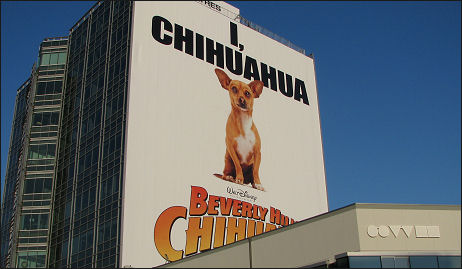 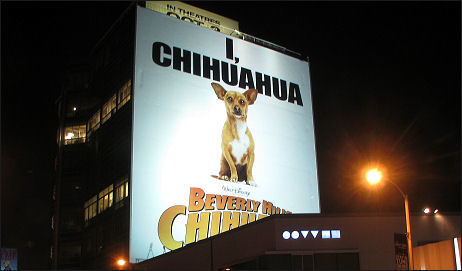 Time‘s Michael Grunwald wrote on Monday that “race is the elephant in the room of the 2008 campaign.” Which led CNN‘s Jack Cafferty to write the following day that “race is arguably the biggest issue in this election, and it’s one that nobody’s talking about. The differences between Barack Obama and John McCain couldn’t be more well-defined. Obama wants to change Washington. McCain is a part of Washington and a part of the Bush legacy. Yet the polls remain close. Doesn’t make sense…unless it’s race.”
Put these together with my “Soul of Ugly Whitey” item-and-subsequent discussion yesterday, which was initially inspired by Tim Wise‘s Your Nation on White Privilege 7.13 posting, and you have four people making the same point. Five if you add Gov. Kathleen Sebelius‘s reported remark yesterday about the Republians’s “racial code language,” i.e.: “Have any of you noticed that Barack Obama is part African-American?”
Wait…six if you count David Gergen‘s response to the McCain campaign’s “The One” ad.

“But it’s time to bring out the white man you’ve all been waiting for. This man is so white, he makes y’all look Mexican. (laughter) He spent five long years locked up in a POW camp, and returned a national hero. (applause) And fucked every white woman in America. (sustained applause) ‘Cause five years–that makes you horny. And women, they luhhv to fuck war heroes. Basically, if you were white and female in 1973, you were fucked by John McCain.
“And then he married a fine rich white girl whose daddy owned a beer company (laughter, applause) And he wants to be president? Sheeyitt, you already got money, beer and pussy! What the fuck you want with the presidency? Quit while you’re ahead! You’re 72 years old — just drink, fuck, and play golf, you dumb white motherfucker!” — from an six-day-old N.Y. Observer piece called “Black Comic Introduces McCain,” by Jonathan Bines.

“Just a few years ago, the coming attractions were a safe haven for cinematic prudes. But this year, R-rated trailers — known as ‘red bands’ on account of the red, “Restricted Audiences Only” warning that precedes them — have become omnipresent. According to the Motion Picture Association of America, nearly 30 restricted-audience trailers have been approved so far in 2008, already matching the number accepted between 2000 and 2006. 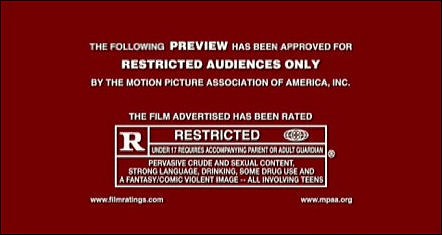 “In surveying the recent crop of restricted trailers, it’s apparent that the studios are still adjusting to the red-band universe: The aesthetics of the R-rated trailer remain up for debate. Which naughty bits should be thrown on the screen as an enticement, and which should be held in reserve for paying customers?” — from Josh Levin 9.17 Slate piece called “In A World Where YOu Can Smoke Weed in a Movie Trailer.”

I’ve been caught up in some issues today. Lots of research, lots of calls. I just wrote a piece about how it’s impossible to accurately assess the restored Godfather discs without a full-boat Blu-ray and 50″ high-def system, which I still don’t have…and then I hit the wrong button and lost the whole article. On top of which the software gremlins at Apple/iPhone came up with a iPhone update that I was stupid enough to download and try to install. The data stopped loading at the 85% mark and now the phone is unusable. I have no choice but to see a genius at the Grove Apple store at 4 pm — it’s unfixable at this end. 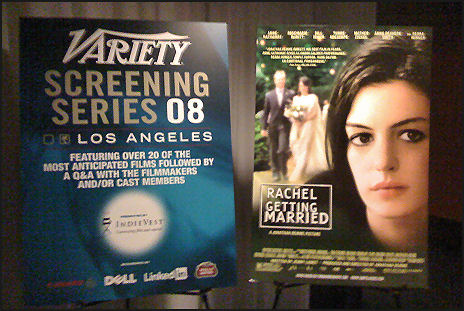 I was also going to get into Jonathan Demme‘s Rachel Getting Married, which I saw for the second time last night at the Arclight, but this is one of those rare days when I just don’t give a damn. I think I had an empty day sometime last year, and here we go with another. I don’t take weekends off, I don’t take nights off, I rarely do lunches…and this is how it goes once in a blue moon.