The YouTube caption says this is Jeff Bridges and Colin Farrell sharing the mike at a Toby Keith concert the day before yesterday — Thursday, 9.18.08 — in Albuquerque, New Mexico, while filming a pic called Crazy Heart.

I don’t know zip except that the director-writer is Scott Cooper, and that it’s based on a 1988 Thomas Cobb novel.
The Amazon synopsis reads as follows: “Singer and guitarist Bad Blake (Bridges) was once a first-rate country-and-western star, but now he’s 57, an alcoholic, a failure at four marriages, and playing in third-rate clubs. The biggest gig he can get is opening for Tommy Sweet (

This is an entire month old, I just scanned it a second ago and it’s easily the funniest Photoshop piece I’ve seen in weeks. Easily. Big congrats to Jeremy Enke and Karl Jefferson. (Thanks to HE reader Bocephus.)

“Brad Grey‘s Paramount will live or die in the next 15 months,” David Poland wrote earlier today in a riff about the completion of the Dreamworks/Reliance deal, and its aftermath.
“But do keep in mind what Par is trying to ride to success. From their press release: “Star Trek by JJ Abrams, G.I. Joe by Stephen Sommers, Transformers 2 by Michael Bay, David Fincher‘s The Curious Case of Benjamin Button, and Jon Favreau‘s Iron Man 2.”
“Star Trek — No Star Trek film has ever cracked $150 million worldwide. There is a good chance that this new, JJ Abrams, fun and gun Trek will break that number. But the film reportedly has gone past the $150 million budget mark, meaning that $300 million worldwide is about the lowest worldwide gross the film can do and get to profit. Double the best ever for the franchise. But hey, Batman did it.
“GI Joe – A franchise that has not had the cultural significance of Transformers in recent decades, yet greenlit at $170 million.
“Transformers 2 – $200 million-plus budget, co-owned by DreamWorks (without investment) and big dollar one gross points to exec producer Steven Spielberg.
“The Curious Tale Of Benjamin Button — It may win best Picture, but with a $150 million-plus production budget and WB taking foreign, it will need Troy or Mr. & Mrs. Smith or Ocean‘s domestic numbers for Par to get close to it being a money maker.
“Iron Man 2 – Not owned by Paramount. Once again, a distribution fee only. But this too will be insanely expensive.
“Get the picture? With marketing, you’re looking at an investment of over a billion dollars on four movies next year (not including Marvel’s Iron Man 2, a 2010 title). And there are 5 other Par-only pics on the sched for next year.
“But counting the films that the studios didn’t make profit-on-production with this year (Iron Man/Indiana Jones IV/Kung-Fu Panda/Madagascar 2), their best grossing year ever, the studio might get to $1.6 billion domestic and about $1.5 billion overseas.
“If they can match this year’s numbers with next year’s movies (starting with Ben Button), they will have some profit. But let’s give Transformers 2 its $700 million again. Can any of the other movies match that? Top that?
“Taking post-theatricals into account, theatrical numbers to make breakeven on the four pictures is somewhere between $1.7 billion worldwide and $2.1 billion worldwide, depending on how big a chunk the points players take.”

MSNBC’s Keith Olbermann is promoting an “Aunt Sarah’s Moose Stew Countdown Raffle.” The copy reads as follows: “For your chance to wash the taste of campaign lies out of your mouth with the savory Alaskan authenticity contained in a free can of Aunt Sarah’s Moose Stew, click here or send a mail to Countdown@msnbc.com.” It’s not a goof? Respondents will actually be sent cans of something or other with the Aunt Sarah label? 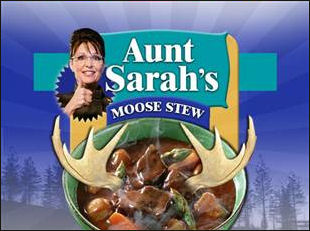 At 8:23 am this morning I posted a story about Ed Harris‘s Appaloosa not (at the time) having any scheduled critics screening in Portland and Arizona, according to info from area critics. I updated it a few hours later after hearing from the Arizona Daily Star‘s Phil Villarreal that a press screening in his area had been suddenly set up today.
And then at 4:33 pm this afternoon, an e-mail was sent to Portland-area critics by Kim Pasion of Terry Hines & Associates, the local rep for Warner Bros.
“Hi All!,” it began. “Please forgive me for the short notice. I misunderstood my directives and just realized that I need to press screen Appaloosa for you all! Uh, I know…I suck! I have set a screening next Thursday at noon. Please let me know if you can attend. Thanks!” 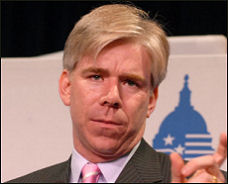 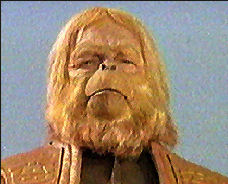 A YouTube message from William Shatner to Star Trek director JJ Abrams, posted yesterday. Shatner is good at feigning mild-mannered, but the reason he is loved is because (a) he’s a metaphor for old-guy vitality and re-invention, and (b) because we’ve all come to believe that deep down he is a true barking loon. And in all sincerity, I worship him for that. “Namby-pamby! Now you’re negotiating!”

Uli Edel‘s Baader Meinhof Complex, the official German entry for the Best Foreign Feature Oscar that I wrote about a few days ago, will screen a week from today at Santa Monica’s Aero theatre. It’ll be presented as part of New German Film Series (9.24 through 9.28) through the sponsorship of Goethe House.

What is that razor-blade thing with the mustard-colored base sitting against Jamie Stuart’s (or some other guy’s) cheek in this NY Film Festival video? I don’t get it. I’m looking for help. Really. The slogan — “You’ve never done this before…have you?” — alludes to the nominal uniqueness of the 46th incarnation of the NYFF. (Right?) I waited all day to post this because I couldn’t figure what to say.

The Defamer guys shared my reaction to the announcement about the Zurich Film Festival giving Sylvester Stallone a Life Achievement Award. They posted a day later, but that was because they were assembling five stunning Stallone clips that are hard to argue with, much less forget.

Journalist Bill Desowitz, a specialist in film restoration and digital home video, has written the following: “For what it’s worth, I can see a significant difference viewing The Godfather Blu-rays (Parts I and II) on my 9-year-old, 40-inch rear-projection monitor (at 1080i). By the way, these were full-digital restorations — there was nothing photo-chemical about them. Here’s a link to my longer article on the Harris-supervised restorations. My favorite Robert Harris quote about Gordon Willis and grain that I didn’t use: “Touch my grain and you’ll be singing with the castrati.”